Let us be non-mainstream. In the world of Linux desktop environments, Lightweight X11 Desktop Environment (LXDE) is not your typical first or second choice. Most people will mention Gnome, KDE, perhaps Unity. You may have heard of Cinnamon and MATE lately, and Xfce is also a solid, longtime niche player. LXDE keeps slipping under the radar.

The thing is, without decent financial backing by the big names, it is very hard creating and maintaining a robust and bug-free desktop environment that can address the needs of the common user, if a Linux user can ever be classified as common in any way. Still, deviating from the usual formula is very tricky, and few distributions manage to balance beauty and functionality well. And the more exotic the desktop environment gets, the more difficult the challenge. For example, in the world of Xfce, Dreamlinux was one of the few players to tackle it properly. Even the big shot struggle, Gnome 3 and KDE being no exceptions. So what happens when you take LXDE and skin your desktop with it?

I am not a novice when it comes to LXDE, but I have used it on very few occasions, so the experiment will definitely be a new experience for me. The installation is quite simple. Most distributions feature the environment in their repositories. You get the usual set of necessary libraries, plus some programs that are unique to LXDE. Most desktop environments do this; they try to set themselves apart by packaging their own programs, which are considered lightweight and useful alternatives to mainstream software.

LXDE does not look too dramatic when you first open a session, and this is a big problem, in my book. The fact you advertise your environment as best suited for old, weak hardware and whatnot does not have to be mutually exclusive with aesthetics, good looks, appeal, or anything in between. The wallpaper is blue-black, but sort of archaic, the LXDE logo is unnecessary, and the bottom panel has an ugly gradient, plus it comes peppered with a few uneven icons that make you feel somewhat bored. I decided to see what I can do from the artistic perspective, before digging into the actual functionality. Configuring LXDE is rather easy, but it sins the old sin that used to plague Xfce, and that is, lots of configurations and options spread all over the place instead of being focused in a single central location. I started fiddling with the panel first, then moved to change the basic set of shortcuts adorning the left side of the panel, the wallpaper, the icon set, and finally the theme. To this end, I had to use some three or four utilities, some of which are not very intuitive. To make things worse, LXDE uses some of the themes and elements borrowed from Xfce and Openbox, adding to the confusion.

Anyhow, step by step. If you right-click on the icons displayed in the left corner of the panel, you can customize the Application Launch Bar. It will display all menu items, and you can add and remove them, as well as shuffle them up and down. Then, click anywhere on the panel, and you can change its height, background color, and sort the elements in the system tray area to the right. Removing the screen lock icon without removing the system shutdown button is not possible, as the two form the same unit. This is a bit annoying in my book of OCD legends and myths. Next, I played with desktop wallpapers, but they mostly clashed with the bottom panel transparency. Go for dark colors, and you can’t see the volume icon, which, by the way, is not shown by default. Then, some shortcuts might also not be visible. Go for light colors or solid white, and the clock is hidden. I realized that LXDE requires simple wallpapers, with two-tone color gradients. Then, I fired up the the system look & feel applet and began customizing in earnest. The nice thing about LXDE is that it can use Gnome icon themes easily, much like Cinnamon. But what about the theme itself? And window borders? This is trickier, and I could not find any menu utility that matched my need. However, when I right-clicked on the pager, in order to adjust the number of virtual desktops, it actually fired up something called Openbox Configuration Manager, which lets you do just that. The changed theme still resides within the strict, somewhat squarish limits of the LXDE aesthetics. When you combine the icon set, fonts and the changed window border, you do get a decent package. Take a look at the PCMan File Manager; very minimalistic, displays items based on their date rather than name, but it does respect network-based shortcuts. And here we are: Looks ok, so what now?

Let me tell you a secret now

All right, here’s the punchline. The fact a lightweight desktop environment exists does not mean you are in any way restricted to running its own program set or not using it on high-end machines. The whole idea is for the desktop shell to be light on memory and CPU, thus responsive, allowing you more free resources for your software, which is what desktops are all about.

In my case, I used this test box, with a dual-core CPU, a generic Intel graphics card, 2GB RAM, 2GB swap, and two 40GB SSD. Not exactly the top end hardware, but surely not an old Pentium II or suchlike. Therefore, it is somewhat difficult to judge how flexible the environment really is on the very far end of the spectrum, but it sure offers some interesting comparisons to other desktops running on the same machine.

In that regard, LXDE did everything. First, it ran both Gnome and KDE programs without any hitches, sans some visual ugliness. Then, there were no problems with the hardware. The special laptop function buttons worked as expected, all of them. Suspend & resume was not harmed in any way. In that sense, LXDE merely enhances the existing set with its own visual layer. As you have noted, I did not tell you which distribution I was using, because it does not really matter. But for the sake of fun, it’s Ubuntu 12.04 Precise Pangolin.

My Ubuntu, now become sort of Lubuntu, behaved well. LXDE had no problem with the Cheese webcam, Kdenlive, GIMP 2.8, or even Skype, including the system tray integration. Likewise, none of the multimedia functionality was impacted in any way, which sometimes happens when you splat a new desktop interface onto your system. Now, what about the system resources, as advertised? Well, here’s the rub. I can’t say what happens when you only have a handful of MB of RAM, but the lightweight factor does not make that much of a difference on any decent hardware. True, my test machine is hard from being decrepit and weak, which sort of erases any advantage built into LXDE. On the other hand, it was fairly tame and calm with 330MB of RAM and little to no CPU background activity. Swap was not mounted and used at all, and I had to manually turn my swap partitions on. In this regard, LXDE offers performance and responsiveness that is comparable to most other desktop environments, with some small advantage over the big players, like Unity and KDE. However, when stacked against the likes of MATE or Gnome 2, there’s little to no noticeable difference. So it becomes the simple matter of taste.

If you ask me, does LXDE merit usage? The answer is, yes. It does not harm your productivity in any way, it merely slightly rearranges the way your desktop looks and behaves, but it’s a minor change. You are not hampered in the way you use your programs, which is the most important bit. You can still keep on using all your Gnome, KDE or other software, and they all blend in without any hassle. On top of that, you get decent looks after some minor home improvement, and reasonable performance that should scale well across the board of your devices.

LXDE is an interesting desktop environment, and probably unfairly neglected. The competition is indeed tough, and with Xfce, Gnome 2, MATE, and Cinnamon fighting the lightweight war so well, LXDE does have to look for innovative ways of staying sharp, beautiful and frugal. Perhaps it comes down to measuring the percentage of battery drainage or the total of wasted CPU cycles. But for most people, there’s quite a bit of leeway. Still, LXDE is decent, good-looking and fairly fast, plus it maintains a traditional approach to computing, so there’s no reason you should not take it for a spin and see what it can offer you. 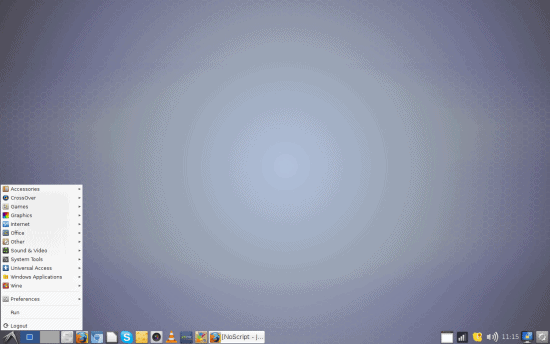