Let’s say you want to use an office suite on your favorite Linux distribution. All right, which one? This is an interesting question really, and often left without a good answer. Unlike most other categories, where friendly wars are most welcome, the office suite competition takes a back bench in the digital combat. So you know your way around browsers, media players or chat programs. What about office programs?

Today, we will evaluate several worthy and less worthy candidates. The only criterion is that they run on Linux. We will not focus too much on cross-platform compatibility or Windows functionality. However, we will examine the look & feel, the available tools and options, ease of use, as well as overall maturity, friendliness and quality. To wit, I present our contestants.

Ever since it’s been forked off OpenOffice following Oracle’s acquisition, this suite has become an instant champion in the name of the free software cause. It gained popularity and support almost overnight, and has taken the lead as the dominant open-source, free, cross-platform office productivity toolbox. LibreOffice is available in virtually all and any Linux distribution repository, and you can use it on other operating systems, too.

Development is quick and hot, and new versions are coming out all the time. The recent hallmark 4.0 release was a significant milestone in the project’s life, and it marks an almost complete departure from its ancestor. But that’s just technical details.

From the user perspective, LibreOffice is a mature, complete suite, with the major focus on word processing, spreadsheet work with data and graphs, and presentations, the bulk of the so-called office work for most people. The program does share its overall functionality with the earlier releases of Microsoft Office, with the classic, multi-functional toolbars at the top, and the work area below. Less knowledgeable users might not even notice the difference. LibreOffice programs are not easy to use, but they no more difficult than all others. Advanced functions are hidden in the system menu under curious names, and most people will never use them. That said, you have a powerful Styles editor, which allows you to create a meaningful separation between content and decorations. The use of art and rich media is slightly clunky, but it is still quite reasonable, once you get the hang of it. For example, if you’re trying to create a presentation with animated transition between slides, you will easily find your way around. The program is as intuitive as any rival out there, including Windows-only counterparts. Therein lies the rub, as this is the program’s greatest strength and weakness. In addition to the usual Writer, Calc and Impress, the LibreOffice suite also comes with a range of other programs, including drawing, database, formula editor, and more. You can export your work as PDF, or even save the files in Microsoft Office formats, with a fairly solid but incomplete degree of compatibility. Extensions are also available, which can enrich the basic functionality.

Officially, Calligra is a graphic art and office suite, created by the KDE team, and forked from KOffice in 2010. The program continues the legacy of the pure KDE software stack, with a colorful, powerful and mostly vast range of components, including the standard Words, Sheets and Stage, which are equivalent to the Microsoft Word, Excel and Powerpoint. You also have a visual database management frontend tool, a project management application, a vector graphics editor, and a flowchart drawing program. Then, you might be interested in the notes tool, a digital painting software, as well as an e-book authoring program.

This abundance translates into power and confusion, as most users will only be able to discover a fraction of the available tools. Moreover, the system menu differs significantly from the classic layout available in LibreOffice. The function menu has a relatively limited array of options, with most of the settings available in vertically tabbed tool panels.

Working with Calligra is different from other, similar programs. For example, while using the Sheets software, I tried creating a graph from my dummy set of data. The graph took almost five seconds loading, and once it was present, it showed wrong axis labels. Furthermore, I was unable to edit the data in the table. Another annoyance was the fact I could not advance between cells by using the cursor keys. I had to hit Enter each time to get out of a cell. In Words, the problems were similar. If you switch from the Text Editing tab, you will no longer be able to make changes to your content until you expand that tab back, which could explain the earlier quirk in the Sheets. The separation of functionality is commendable, but it is counterintuitive and not very efficient, as it introduces extra clicks to the workflow. Lastly, the interface is so cluttered it can intimidate less skilled users and first time testers. My experience shows a fidelity of file format conversions to be somewhat similar to LibreOffice. However, the general usage flow was slower, less smooth and much less familiar, especially if you have used Microsoft products in the past, which, let’s face it, will be a reality for most people out there. Overall, the Calligra Suite promises so much, but it fails to delivers by overachieving in what can be containing within a reasonably designed software interface.

Our third candidate is a somewhat lesser known Chinese product, which has marketed its work at the domenstic audience until recently. Kingsoft Office is a cross-platform suite, with the three standard components, and it is available in both free and pro flavors, the latter which costs money. Currently, both versions 2012 and 2013 are available, with a reduced price for the last year’s edition. Finding the Linux version is a little tricky, because it is not well advertised, and you will have to handle support and updates on your own, as the suite is not available in most Linux repositories. I can only think of one distro that offers this software out of the box, and that’s Linux Deepin.

However, once you get past the initial setup difficulties, which also includes the choice between English and Chinese for the user interface, you will discover a lithe, refreshing software that offers a curious blend of aesthetics and functionality. Kingsoft Office lets you skin your three individual programs any which you want, allowing to switch between the classic looks, ribbon and flat, in a nod toward Microsoft Office. I was pleasantly surprised by the speed of the program, as it responded much faster than the other two suites. Furthermore, it has the best overall workflow design, and the ability to change it is another strong bonus. If you’re looking for the most intuitive office suite around, this probably has to be the Kingsoft Office. But like any hero, it has its Achilles’ Heel. Namely, the file format support is quite limited. You do not get support for Office Open XML, or even ODF. This is a big issue for most people out there.

Here’s another payware solution, although earlier releases are available for free. I have first encountered SoftMaker in DreamLinux, where its older, lightweight 2008 edition was made available with the default distro set. On the official site, you can find and trial the latest 2012 version for 30 days or 30 launches, whichever runs out first.

In my test on top of Linux Mint Maya, the software installed without any problems. However, even if you download the 64-bit Debian installer, it still requires a whole bunch of 32-bit libraries to work. Then, once the program was fully sorted out, I hit an instant wall of disappointment. For some reason, SoftMaker decided to use only about one quarter of the total screen equity, around 680px in width at most, and no attempt to resize rf maximize the window would get it beyond these invisible, self-imposed borders. That made the user interface tiny and inaccessible, and virtually made my test attempt moot. The only thing I was able to discern was the classic layout, with multiple toolbars. Other than that, I was not really able to play with the software, which is kind of a shame. Still, it’s an indicator of its own, nevertheless. OpenOffice might also be a candidate for some, but if you try finding it in the official repositories, you will most likely be disappointed. The official website lists version 3.4 as the last release, and it hasn’t been updated in about a year, which probably shows where the OpenOffice is headed. LibreOffice has since reached its 4.X release, and offers numerous fixes and improvements, which eclipse pretty much anything and everything that OpenOffice can offer.

AbiWord is not an office suite. It’s a standalone Word processor, tiny yet powerful, including some really neat tricks, great fonts, and a very decent support of a wide range of file formats. Together with Gnumeric, it can be considered a poor man’s substitute to a fully fledged office suite, and a definite match for weak systems with few resources. If you’re not looking into a complete spectrum of functionality, these two programs can satisfy most of your needs. Perhaps not suprisingly, LibreOffice seems to offer the best overall balance and compromise among all the tested suites. Its biggest strength is growth and stability, tightly coupled with a well proven work record and overall compatibility. If you try to nominate the second and third place, it gets tricky. On one hand, Calligra is a better overall suite than Kingsoft Office, but for most people, the extras will not matter. Calligra comes with a very tricky interface. However, Kingsoft Office is hard to find and download, and offers only a small subset of file formats. Speed and elegance definitely count in its favor, though, but if you want simple, you will definitely want Abiword and Gnumeric. SoftMaker Office disappointed in this round of testing, so it’s really hard to say how it scales against the rest.

I wish the ranking would be eaiser, but it only exposes how complex the office suites really are, which makes them such an unlikely candidate for comparison tests. For people who want to get the most of their office suite, LibreOffice should provide the optimal set. If you don’t need a lot, you could get by with just the two standalone programs. Should LibreOffice not satisfy you, purists and professionals will prefer the new KDE suite, while those who need aesthetics first, functionality later will find KingSoft office a refreshing departure from the conventional lines. And that brings us to the end. 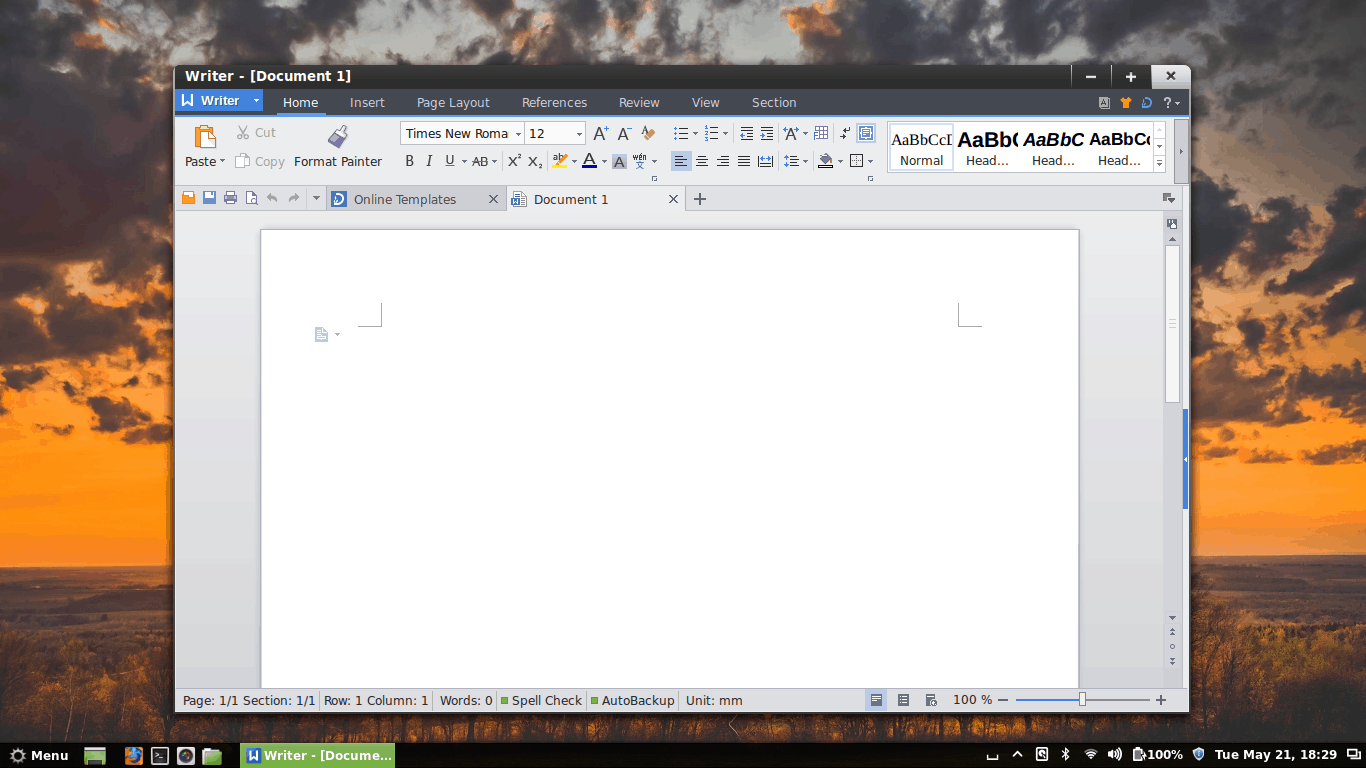