I’ve been using Linux for over 10 years now and I’ve managed to make more than a few user switch. My strategy is rather simple. I don’t rely on a checklist, because I don’t propose to them to switch to Linux entirely, I don’t even tell they switch to Linux. Here’s what I believe are the steps to success.

Windows is your best friend

Seriously. It will eventually drive your friends, family and acquaintances nuts. Since you’re likely the free tech support of all your inner circle, you don’t need to even pay attention to catch them in their darkest moments of hair pulling, they will “happily” inform you. The range of problems with Windows varies so much that I can’t even give you a recurring example. What I can offer you are a few of my latest anecdotes.

My last frustration was trying to try out Windows 8.1 and not being able to install it to an external drive, because it isn’t the right version. I just own Windows 8.1 Pro but it’s only available on Window 8.1 Enterprise. Sight. Every time I attempt to try Windows, Microsoft kindly reminds me of yet another reason I don’t use it in the first place.

From a third party, the last big frustration was Google Chrome simply refusing to uninstall. Then Windows refusing to install or uninstall anything because an installation was already on process. Then refusing to turn off his computer because a process was on-going. He had to every night force his computer to shutdown by holding the power button. Oh Windows. The solution? We tried uninstalling it on safe mode, we tried cleaning the registry, manually deleting the files. Nothing worked. He had to actually use his recovery partition (because God forbids Microsoft from providing a DVD, ISO image, licence key or a USB drive with Windows on it, no, no, no) and he lost most of his data in the process (he didn’t make a backup because he underestimated how much stuff he had).

Another hilarious one, downright pathetic one, happened to one of my best friends: His version of Windows doesn’t support changing the language from Spanish to English.

So you just need to wait almost silently in a corner while your loved ones cry out of despair. While their tears roll down their cheeks starring at the Window’s logo, that’s your time to strike with subtlety.

Never suggest them to switch

I guess many of the readers will feel identified with what I’m about to say: Free Software is part who I am. People who know me, know I’m into free software. I sometimes speak about the altruism, the social values, the ethics of the free software movement with them. Or related movements such as copyeft. I talk about what I like about Linux too and why I use it. But I don’t usually suggest they switch. I just make comments about something that is important to me and something I think is great, but I don’t try to get it down their throats.

So I casually comment how much has GNOME 3, a desktop I didn’t like at all at the beginning, improved in the last year and a half. How KDE is going about making its new visual design with direct feedback from the community. Or how SteamOS will run on Linux. Or how stable it is, how flexible it is, how I don’t have to worry about stuff I know they worry (Norton and friends come to mind). And they see how much I enjoy using Linux, testing new environments, writing about it, thinking about its future, coming up with ideas to fund development on societies without proprietary software.

They start realising those Linux and free software things must be up to something. In their darkest moments you only need to casually mention how happy you are with Linux.

They will ask you if they can try Linux

When Windows is getting the worst out of them, they will ask. They will have many questions. Be sincere about what is and is not available on Linux. I always recommend them to keep Windows alongside Linux. Why they ask and I tell them because maybe in the future they will need something Windows-only. “You just pick the one you want every time you turn on your computer”. This takes much of fear away. They don’t fear losing what they already know, they don’t fear not being able to do what they currently do. As an old Mac v. PC commercial put it: “Fear of switching is the foundation of customer loyalty to PCs [as in Windows]”. Of course, you’re not going to recommend a new users something like Arch Linux or Gentoo. You want to go with something simple that works out of the box. Usually an Ubuntu-derivative is the best choice simply because most people use it (and therefore there’s always a ppa to save you, support on the web, is well tested, among many other pluses). Distributions that include pretty much every codec, proprietary drivers, and other features to make his or her life easier, like Netrunner, obviously present an advantage. But don’t pick for them which flavour. Use this as an opportunity to show him/her or them just how many choices exist outside Microsoft’s jail. Show him KDE, Unity, GNOME 3, Pantheon, Cinnamon, Mate, and give him advice and your personal opinion on which is best for him (after all, you probably know him well). And let him choose which desktop environment he likes the most and help him install that one.

I can assure you that this is an effective way of making users test and eventually switch to Linux. Let them come to you and then let them choose what they want.

My friend who couldn’t change the language of Windows asked me. I showed him many (Ubuntu-based) distributions with their respective desktop environments. And he knew which one I personally use. But he liked Pantheon more than any other (Elementary OS) so we downloaded that one and installed it. A few days ago he confessed me he hasn’t boot into Windows for more than a month. It’s not about a checklist, you can give them the opportunity of trying both. If they ever encounter a situation in which Linux doesn’t offer an alternative or a solution they just hit reboot, boot into Windows, do that particular thing and go back to Linux. Most users probably won’t ever require to do so. 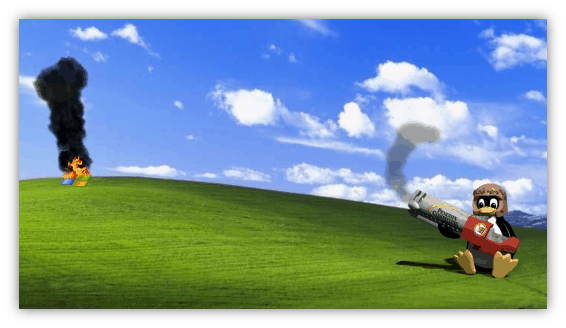