Vi Hart, the immensely entertaining mathematician/piano player and vlogger, has put out a video that, in classic Hartish fashion, explains the cause and the issues behind the attack on Net Neutrality in terms everybody can understand and without actually dumbing down the matter.

See her video on the subject below, or read the whole script at her website – there’s a lot of information packed into the 9 minutes and it deservers a read.

Vi Hart is something of a legend. In most of her videos she has takes upon herself the task of explaining complex math and its relation with the arts, especially classical music and poetry. This would seem like a guarantee for failure in a realm where videos of cats sitting in boxes and teenagers endangering their chances for future reproduction reign supreme.

But the number of views on her videos is often in the hundreds of thousands, sometimes millions, region; and her channel has over eight hundred thousand subscribers.

And so it should. I personally know next to nothing about either algebra, geometry, or playing the piano. Yet Hart manages to make her topics enjoyable, understandable and fun. Watching her channel is one of the few YouTube experiences that, when you finish bingeing on her clips for the day, you actually feel smarter.

Even the cleverest amongst us would be hard pushed to make high concepts, such as real numbers, infinity, and the endless digits of pi, mind-blowingly interesting, hilarious, and comprehensible, all at the same time. But Hart manages this and more. And all she needs to do so is a notebook, some coloured pens, and her own, hysterically deadpan monologues.

Hart is also kind enough to release all her videos and songs under generous CC By or CC By NC licenses, which make them ideal for their inclusion into school material. 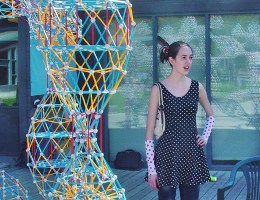