Synfig Studio is a program for creating animations and rendering them to film. It allows you to create anything, from animated banners (does anyone still use those? Wait a sec while switch off my ad-blocker… OK, they do.), to feature length films.

Synfig is different from Blender in that it does traditional 2D animation. Think “The Simpsons” or “South Park” (what Synfig does) versus “Up” or “Toy Story” (what Blender does).

Version 1.0 integrates all tools into one window.

The program uses vector graphics, so you can scale images and objects up or down and they won’t lose any of their original quality. You can tweak the nodes, and pull and push the handles on the nodes to change the shapes, but you can also import bitmap images and use them as cutouts in your animations. More about this later.

Synfig simplifies creating animations by calculating the intermediate position for each frame of an object’s nodes between keyframes. Using keyframes is a common technique in most animation programs. You set a keyframe as a frame where you decide a transformation on an object starts and you set another keyframe where the transformation ends.

Say you want to move a box across the stage from point A to point B in 25 frames (this is called a translation transform, by the way). You set the frame where the box is in position A as the first keyframe. You then move 25 frames along the timeline, pick up the box and move it to position B and set frame 25 as a new keyframe. Synfig Studio will then automatically interpolate all the intermediate frames, building the animation showing the box move.

You can render your animation to many video formats.

Synfig also allows you to apply effects, such as blurring, non-destructively to objects and change nearly every attribute of a shape (its colour, position, size, rotation, etc.). All these transformations are also keyframable, so, you could have an object gradually go from blurred to sharp, making it look like it is coming into focus. With Synfig Studio you can group objects together so that they can be manipulated as a single block, but with the advantage of still being able to work with objects within a block individually if you need to.

When you are done, you can export your animations to an animated GIF or to most video formats. Transforming an animation into a film (say, an WEBM or MP4 file) is called rendering. It can be done from the graphical interface, or, if you are creating a long and heavily animated clip, you can send the file off to the command line renderer (called simply synfig) that can generate your film on a headless server. This has the advantage of freeing up the CPU of your workstation so you can continue doing other stuff.

If you’ve used earlier versions of Synfig Studio, the first thing you’ll notice is that 1.0 comes with a brand new, integrated, one-screen interface. This is a vast improvement over the multiple window interface of yore. If you have a big wide screen (and if you’re doing animation, you should), all the tools, timelines, etc. are now integrated into docks on either side and below the work area. The GTK library also allows you to change the look and feel with themes.

The new Synfig Studio comes with a brand new skeleton system. When an animator talks about “skeletons“, “bones” and “joints“, she is usually talking about what is called cutout animation. Say you have a character made up from different pieces, as in you have different objects for the head, torso, legs, arms, etc. You can join each piece together to build the whole body with a skeleton and make the limbs pivot around joints using bones. The video below shows how this works.

Another thing that is new in version 1.0 is the Sound Layer. This allows you to synch your animation with audio files, be it dialogue, music or sound effects, directly within Synfig Studio. Before version 1.0, sound had to be added and synched in post, using a video editor like Kdenlive.

Synfig Studio may seem overwhelming to the non-initiated, but that’s because animation is in itself a complicated, labourious process. Despite the program’s complexity, Synfig Studio simplifies the task enormously. The Synfig community is also very good at producing decent documentation, tutorials and teaching videos. Check out their material on the Synfig site and you’ll soon be up to speed.

If you like Synfig and find it useful, you should consider donating to the project. The Synfig team operate on a very small budget and only have one paid part-time developer. However, the quality of the program is amazing considering the difficulties they face.

You can help Synfig using the PayPal or Pling buttons on the main page of their site. 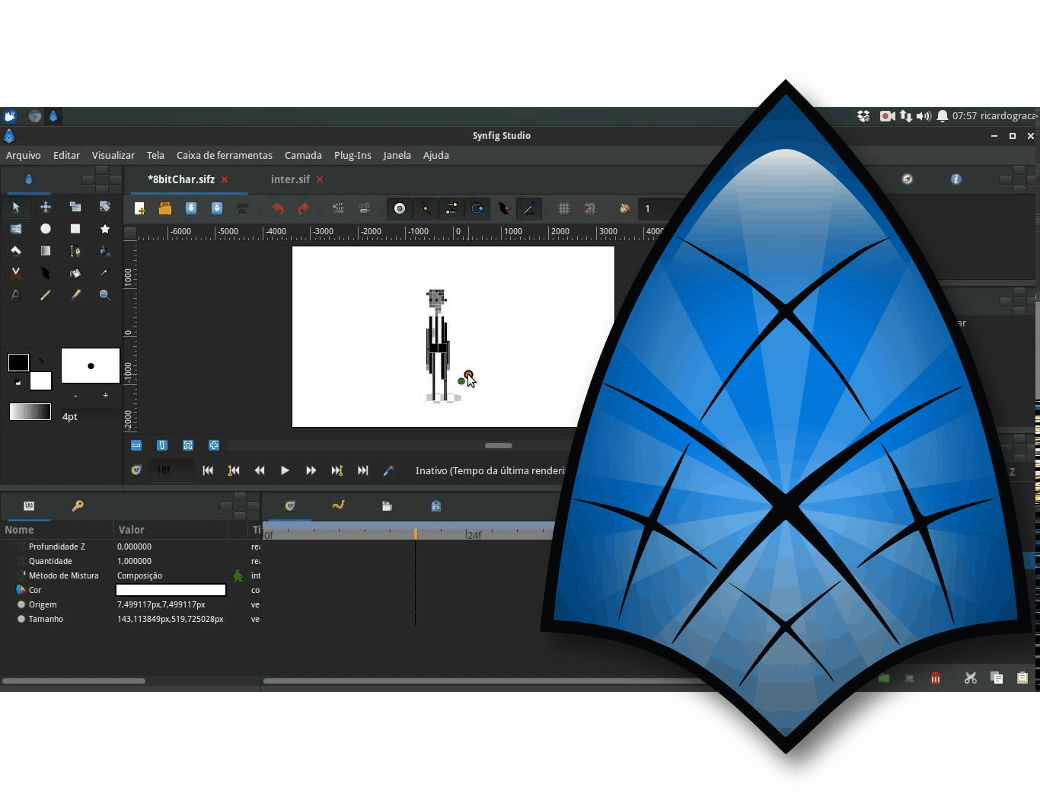