In the final installment of this series we shift our focus away from FLOSS applications for creating bitmap graphics (in Chapter 1 we talked about Krita and in Chapter 2 about GIMP) to Inkscape, a seriously cool application for creating vector graphics, and we do so by talking to Tom Carlos, an artist who uses Inkscape to create eye-catching portraits and landscapes. 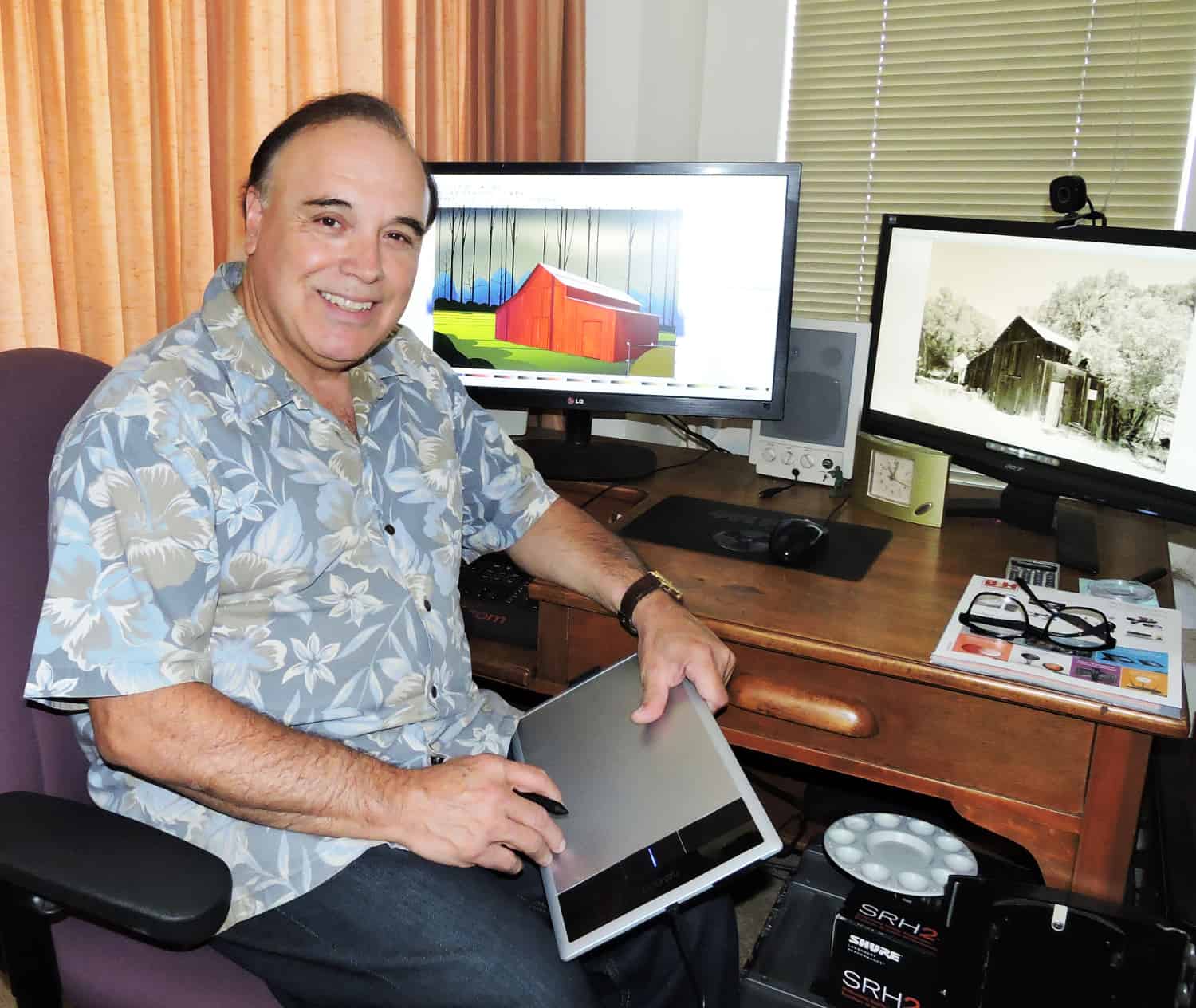 Tom Carlos uses Inkscape to create dreamy Californian landscapes and 80s-styles portraits. The complexity of many of his pictures not only make them aesthetically pleasing, but are also perfect to showcase what you can achieve with Inkscape, as well as exposing its weaknesses — developers may want to take note.

Tom agreed to talk with us about why and how he uses Inkscape and the source of the inspiration for his pictures.

Tom Carlos: Hi Paul, how’s sunny Spain today?
Paul Brown: Hah hah! I could ask you the same about sunny California! Today it’s a bit windy, but nice. It’s summer (kinda) already. People on the beach and so on.
Tom Carlos: The weather in California is great today. Sounds wonderful in Spain too. I would love to visit Spain one day.

Paul Brown: But, from your pictures, it seems you live in a very beautiful place anyway. Why did you choose Inkscape to portray your home? I mean, why not a more prevalent software package, like, I don’t know, Illustrator?
Tom Carlos: I chose Inkscape quite by accident, but after using it for a while, it worked out really great for the kind of artwork I wanted to do, especially for the landscapes in my area. 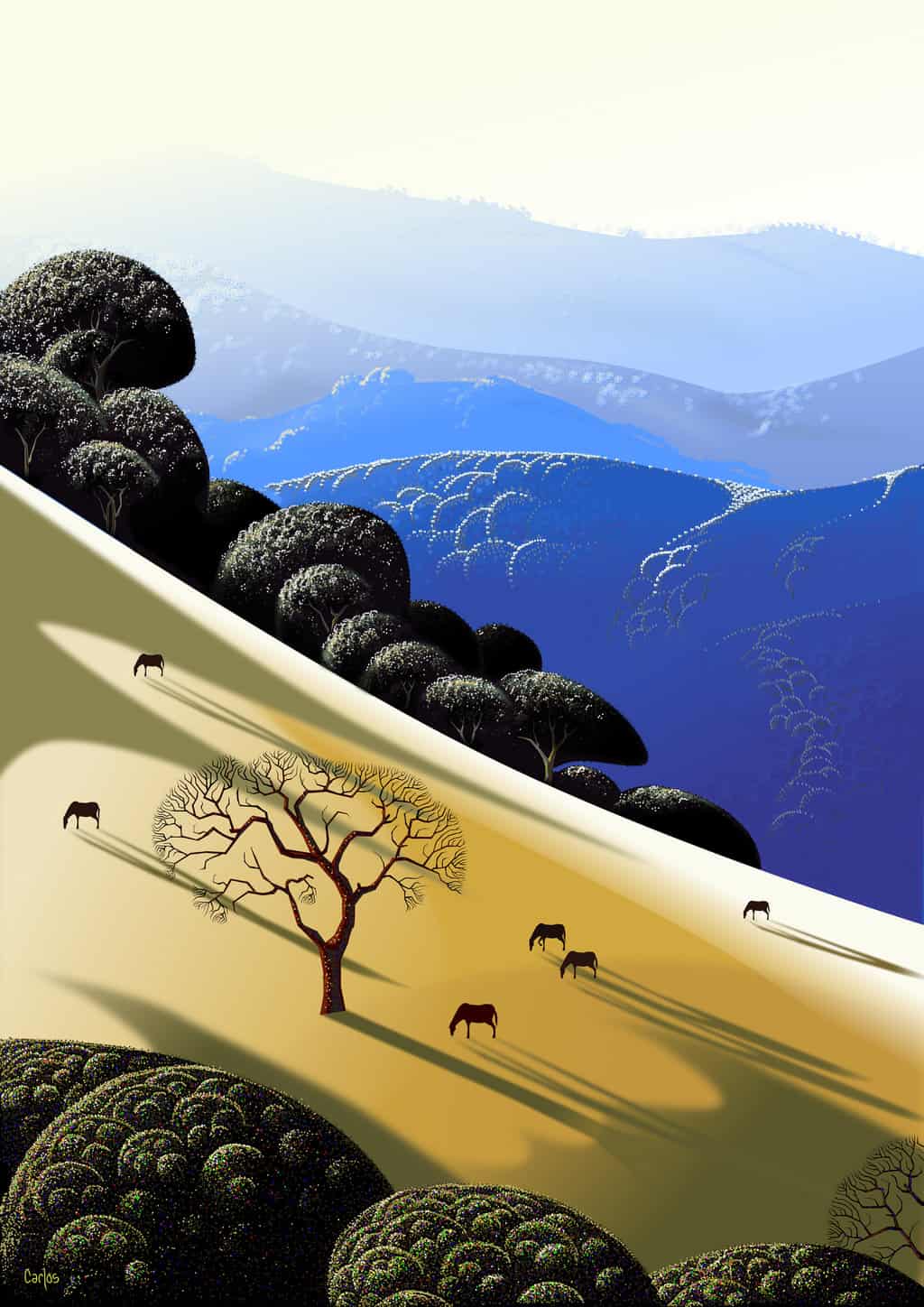 Paul Brown: How did this “accident” come about? Did someone install it for you? Did you read about it and you said: “I’ll try it”?
Tom Carlos: The reason I chose Inkscape over other software was not only because it was free but it was very similar in some ways to AutoCAD, a software I’ve been using for years. I was using another open source software program to create a virtual machine on my computer using Ubuntu.

Paul Brown: And you found Inkscape in the Ubuntu’s Software Center?
Tom Carlos: No. I found it just surfing the internet. I found the download for Inkscape and I gave it a try. I installed the software myself.

Paul Brown: So, are you using Inkscape on Ubuntu, another Linux, Windows or MacOS X?
Tom Carlos: I’m using Inkscape with Windows. I’m too tied into other programs that use Windows. That’s the reason.

Paul Brown: It sounds like a very specific search, I mean one that would lead you to Inkscape. Did you have any idea it existed before it popped in your search results?
Tom Carlos: I had no idea it existed until I started looking for free software to use on Ubuntu. Once I started using it I loved the program and knew I had to use it with Windows.

Paul Brown: Were you in any way surprised about its features, considering it is a community-developed program? Or were you already familiar with other similar open source projects?
Tom Carlos: Yes, I was very surprised that this community-based program was so well designed and had so many great features. That said, I am familiar with other open source projects. One of my favorites is Blender.

Paul Brown: I think you do have some niggles with Inkscape though. What would you ask the developers to change or correct?
Tom Carlos: Everything that I’ve found in the program so far in regards to features and functions are great for what I need. The main problem is with the performance. I tend to draw pictures that incorporate lots of details, causing the refresh rate on the screen to slow down.

Paul Brown: Ah, yes. Many of your painting have an insane amount of detail. It sometimes looks like parts of your pictures are generated from fractals.
Tom Carlos: I know this is something that is very common with lots of software. I also know that Inkscape was created for illustration type of work and not so much for fine art type of work. I know its not fair to criticize the developers, because they’ve done a wonderful job. I just need to figure out better ways to achieve the results I want, as the program improves in that area.

Other than social media, and the occasional feedback, most everyone is positive about using Inkscape. Currently, I have been experimenting with ways to help me make more complicated drawings with Inkscape. Eventually, I will have some sort of procedure I hope I can share with everyone. 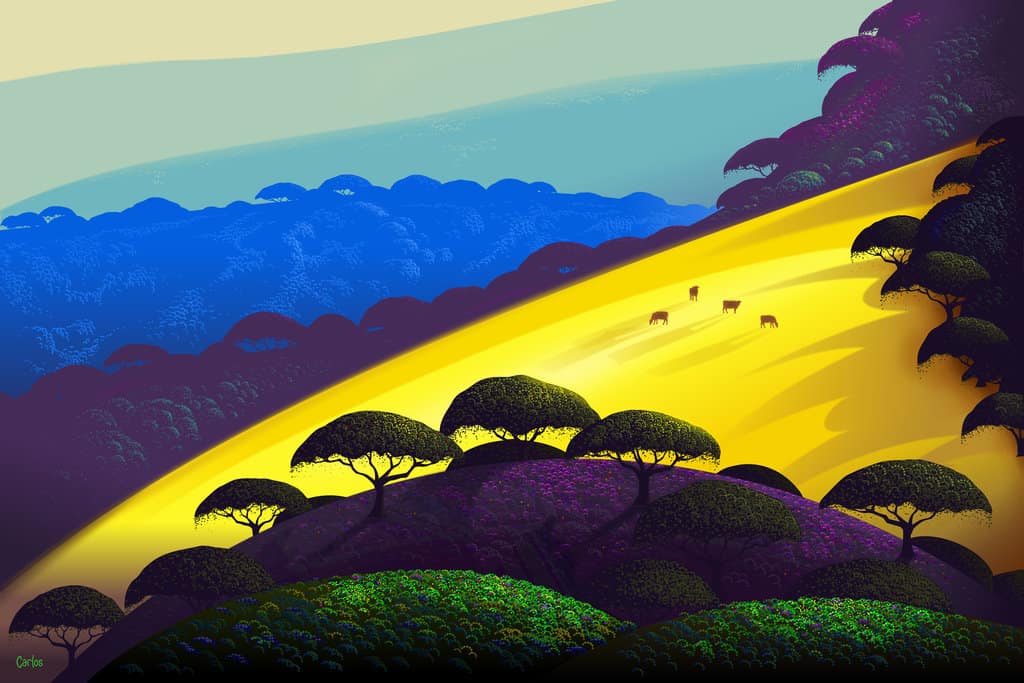 Paul Brown: That would be very interesting. Learning how to deal with a massive number of nodes would be very helpful. I believe the developers also welcome feedback.
Tom Carlos: That’s a good idea. I’m just hoping at some point to have something useful to contribute. 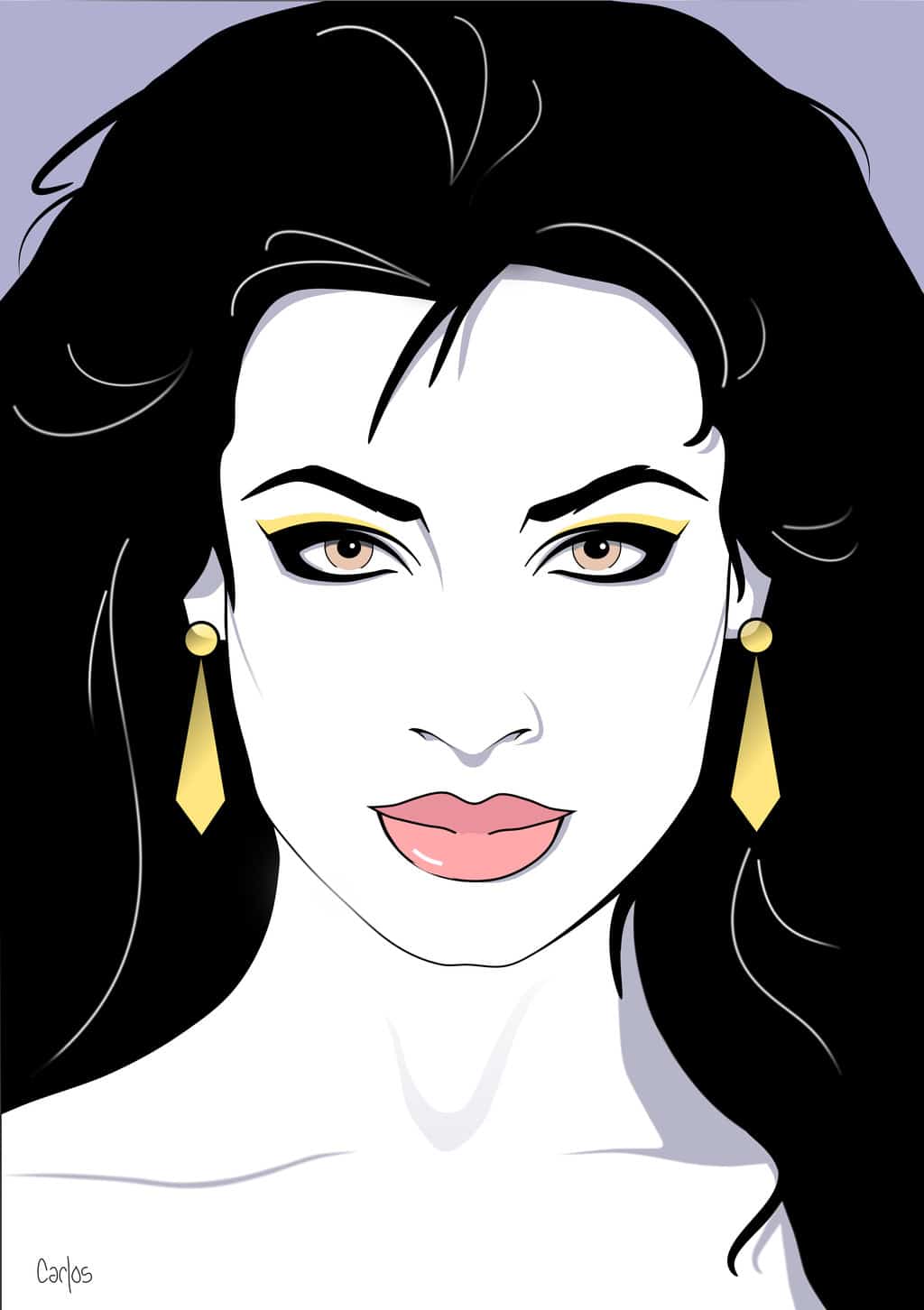 Paul Brown: Let’s talk about your art itself a little bit. It’s interesting how you have chosen a very simple, Nagel-like style for your portraits, but then your landscapes are super-overloaded. Where does the influence for the latter come from?
Tom Carlos: My artwork for landscapes was influenced by two things. The first is the environment I grew up in. My parents were migrant farm workers, so in my younger years I spent lots of time in the hills, orchards, and ranches which were surrounded by the beautiful hills of the Santa Clara Valley.

Second, the artist that most influenced my landscapes was Eyvind Earle. I was enchanted by the scenery and landscapes in Disney’s Sleeping Beauty. Eyvind Earle did many of the illustrations and scenery that was later used by the animators. When I was a little boy my mother took me to see that movie and, although at the time I didn’t know who Eyvind Earle was, the memories of those hills and trees remained with me probably because they reminded me of where I once lived

With regards to doing artwork similar to that of Patrick Nagel, Inkscape lends itself to that style beautifully.

Paul Brown: What is your process? Do you take photos, sketch by hand on site and then use Inkscape? What are the steps from concept to final work?
Tom Carlos: It varies. Sometimes I’m out and I will see a hillside with the shadows and highlights from the sun in a manner that inspires me to start a new project. If I have my camera handy I will take a few snapshots. Then, I will use the photos as reference. Occasionally, I will import an image into Inkscape and trace some of it. Usually, I’ll take several elements from several photos and use them in my art.

It’s not so much the images from the photos that I use as much as the lighting effect, mood, and the rest is just my imagination. I don’t really trace that often because I use dual screens when I create my drawings, one screen for Inkscape and the other for reference photos.

One of the great things about Inkscape is that it has a great layering system. I’ve been using CAD software for many years and I’ve learned to take great advantage of the layering system and it translates well over to how I use Inkscape. When I create landscapes in Inkscape the layering scheme I use is more than likely the same as I would imagine others would use: the closest objects are layered on top of the furthest ones.

I create all the basic layers first, then add the outlines of the large objects, sky, hills, foreground, etc… When I’m done with all that, I start adding all the vegetation, and then the final details. I adjust the gradients and colors as I go along.

Paul Brown: Apart from portraits and landscapes, you have that image of the rivets on the bridge tower. It reminded me of some of the work by Jean “Moebius” Giraud. And the picture of the leaves that looks like something M. C. Escher would have painted.
Tom Carlos: Ah yes, the drawing I did of one of the Golden Gate bridge towers, that was a fun one! It was fun but tedious. 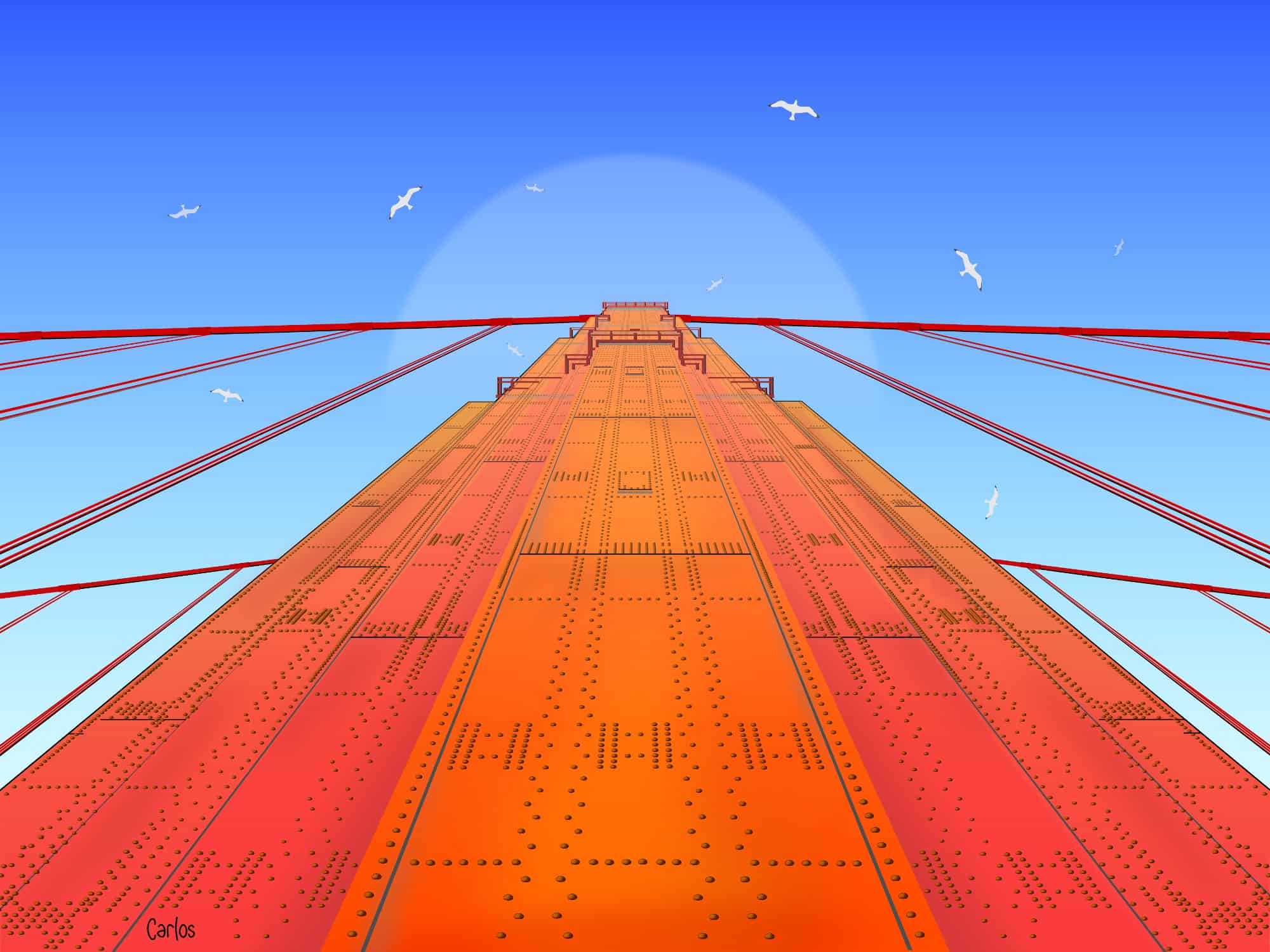 Paul Brown: Well, it looks incredible, tedious or not.
Tom Carlos: Thank you! I learned a lot from doing that one. I’m always learning, every time I make new artwork.

Paul Brown: What are you working on now?
Tom Carlos: I’m currently working on a new drawing of an old barn. I took a few photos a year ago while I was out driving around in the San Jose East foothills. I’m using the image of the barn as reference, but I’ll probably make up the rest of the scene.

Paul Brown: How long does it take you on average complete a picture? Or does it vary wildly?
Tom Carlos: Generally, with Inkscape, the landscape drawings will take from three weeks to a month to complete.

I tend to work slow, but part of the reason is I’m still working full time and, with the hours I work and commute times, I end up with little time to do art. So I have to spread the limited time over several days, most of it on the weekends.

The other factor which adds time to my drawings is the lag and occasional crashes with Inkscape. Again, that’s only because I usually have a large amount of nodes in my drawings.

Hopefully, I’ll be able to retire within the next 3-5 years. I hope to be able to do art full time, perhaps help supplement my income with it. What’s really important to me is to continue to create the art, get better at it, and share it with others. 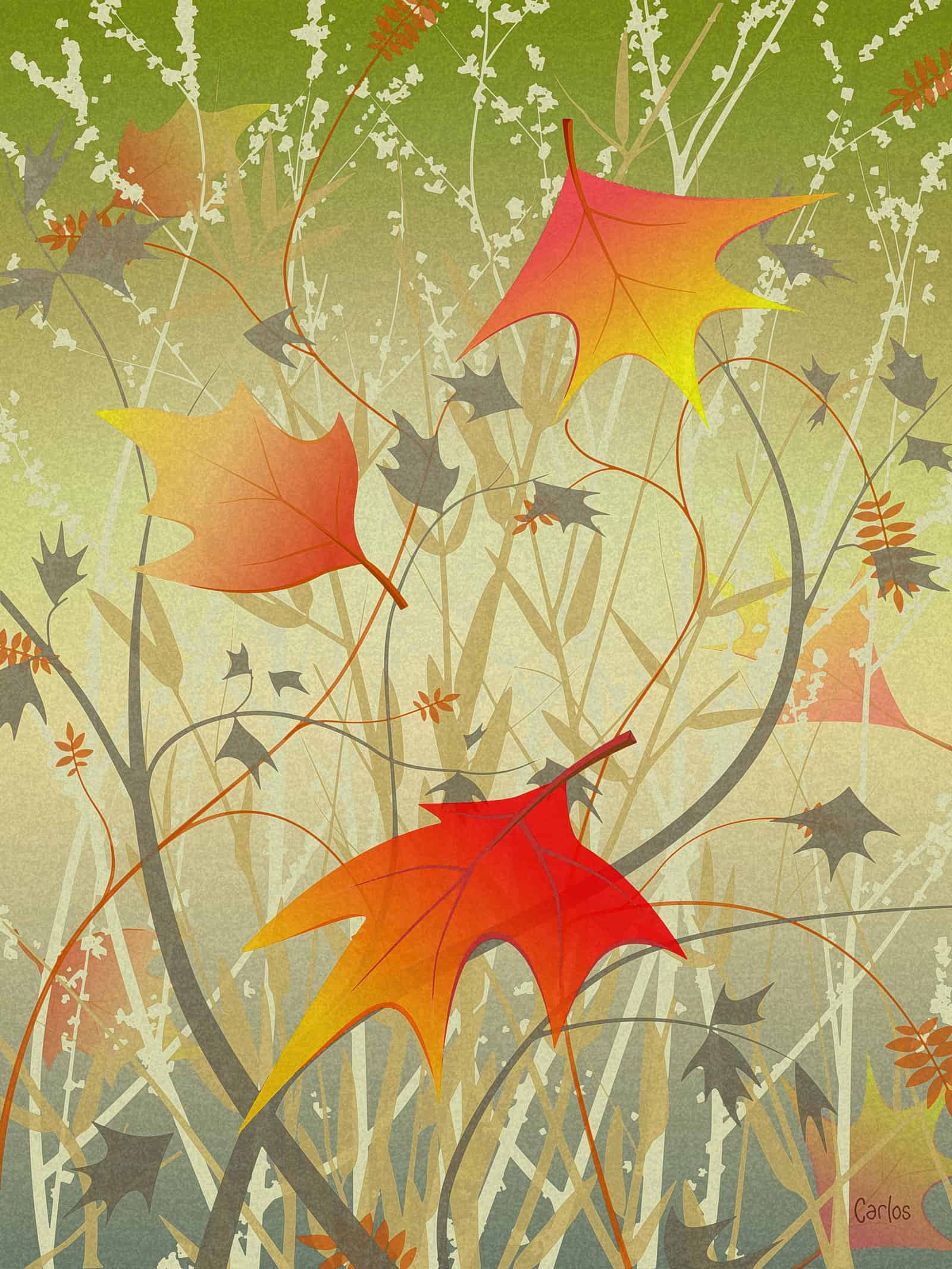 Paul Brown: How can readers support your work? Do you have a donation page, shop, or something like that?
Tom Carlos: I do have a web page where people can go to see my art. I’m not really taking donations from anyone. What’s more important for me is to get my art into the public eye, to get it distributed widely. Although I do post my art on some of those print to order sites, I do it mainly to get the search engines to pick up the images.

If some one wants one of my images for their own personal use, that’s perfectly fine with me. They can download them from DeviantArt and other web locations.

Read the second part of this series in which we talk with Evelyne Schulz, painter of fantastic realms, about GIMP. 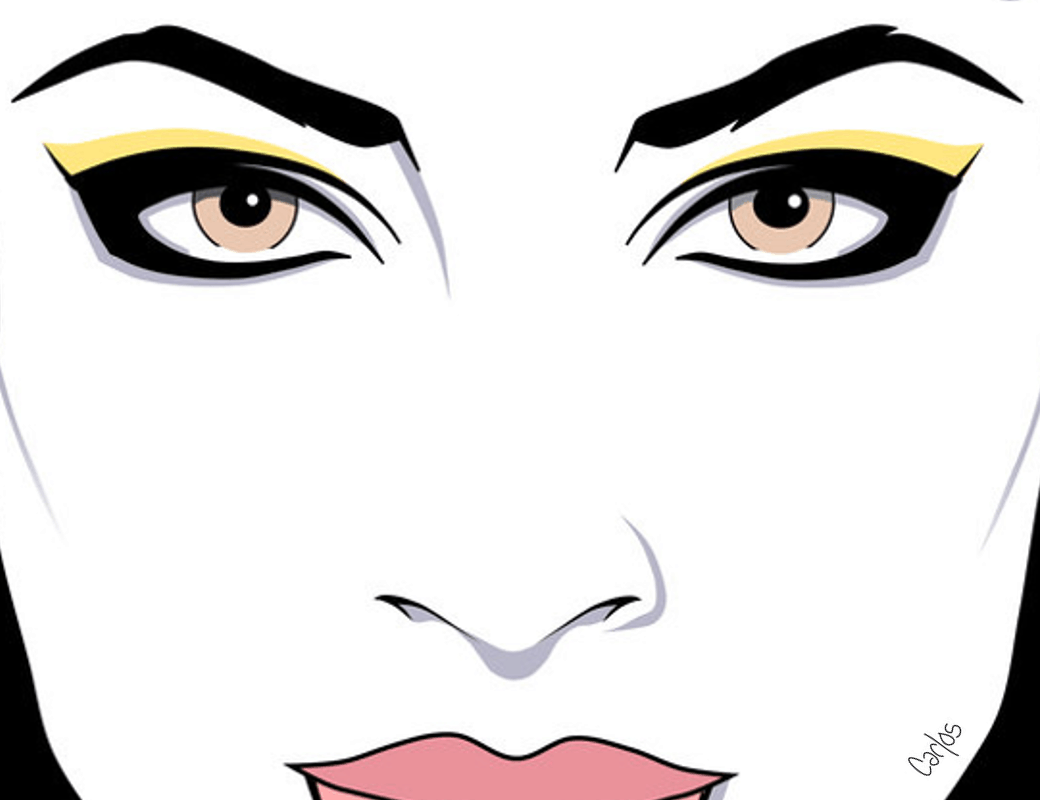