Documents, documents, documents. Didn’t Steve Ballmer shout that at some expo some time ago? No? Never mind. Let’s talk about Okular instead, then. This is a document viewer for Linux and THE document viewer available in the KDE/Plasma desktop environment. It’s been around for a long time, it’s survived quite a few seasons of ever-changing desktop versions and tool, and its name doesn’t even begin with the letter K, which tells you how robust it really is.

Having embarked on a journey of leaving no stone unturned in the Linux desktop world, it is time for me to take a deeper look at Okular. We started with the rather comprehensive State of Plasma report, we talked about Amarok and whether it will ever see revival, and now we will do this. After me.

Open your eyes, look up to the skies and test

So, my test bench is Kubuntu 17.04 Zesty Zaphod, which I found to be an extremely awesome distribution, and it has overtake the bulk of my overall Linux time, simply because it offers a superior user experience across many important facets of desktop usage. It also comes with Plasma 5.9.4, so you get all the latest goodies, and Okular is at this point at version 1.03. Not the latest, but it will give us a reasonable indication of what to expect. 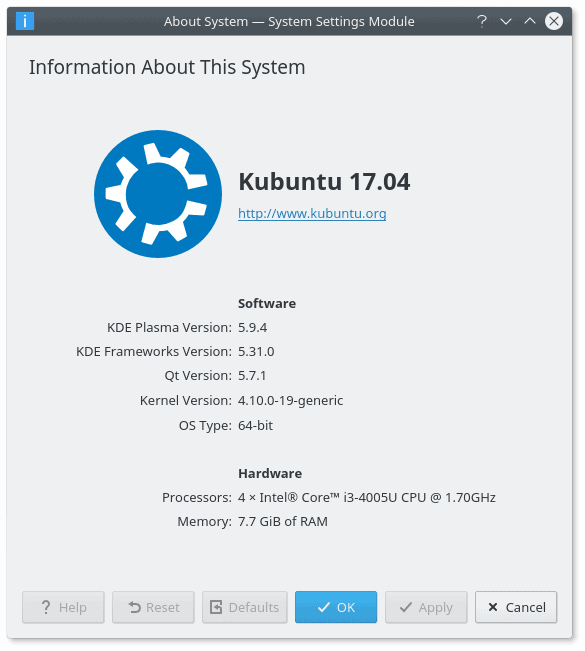 To see how useful the program is, I grabbed the following stuff: my kernel crash book, in PDF format, two separate copies of some of my fantasy books in Kindle and Mobi formats, one each, and an interactive PDF tax form off the US revenue website. 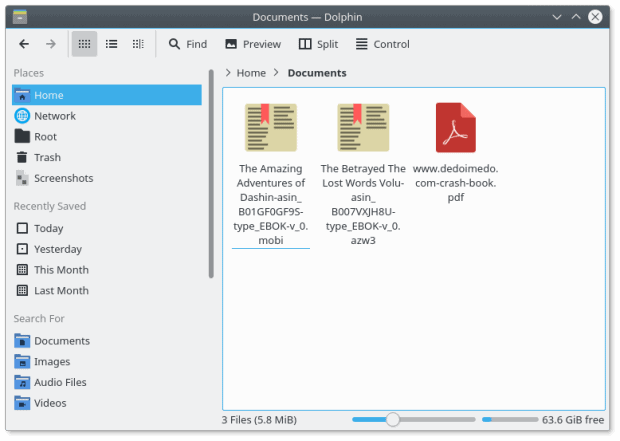 I started with the kernel book, a 182-page document. No problems. Okular displayed it just fine. The basic functionality is quite all right. The main window comes with a fairly clean interface, with several side panes and toolbars that can help you navigate and use your documents. You have a table of contents, adjustable-size thumbnail previews, bookmarks, and notes. You can also display the document on the right side in several view formats, with intuitive zoom and full-screen presentation features. 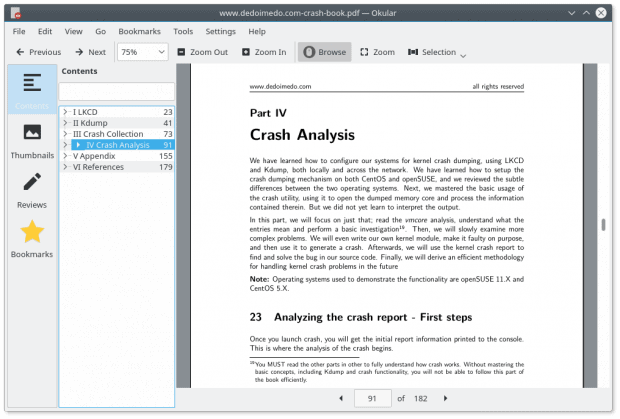 Okular also lets you mark your documents with notes, comments, funny shapes, text highlights, and several other tools. If you like to review your files aggressively, you will find the available set decent enough. However, I did struggle with the stamp thingie, and the strikethrough line tool did not look visible enough on my laptop’s screen. Once you’re done editing, you can see all your changes by clicking on the Review button on the left side, and then edit or delete them as necessary. 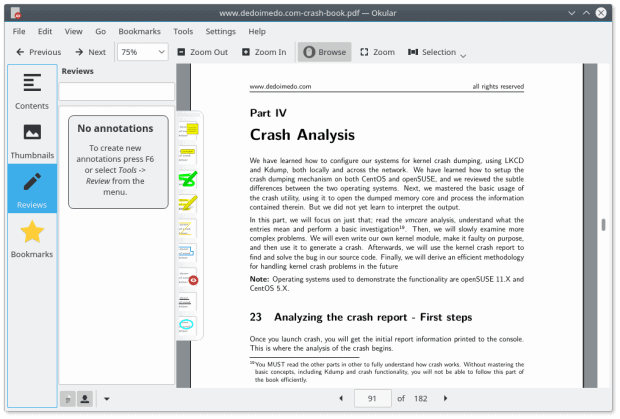 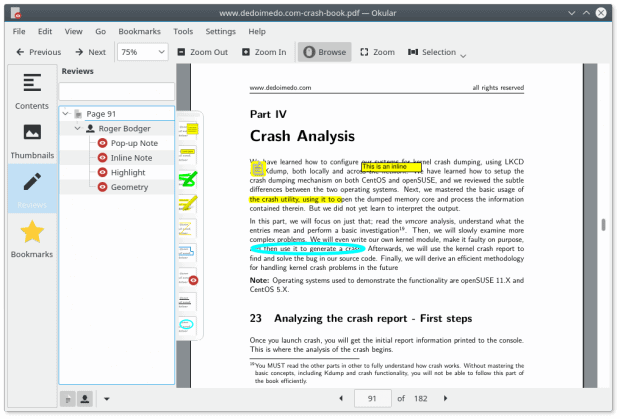 The same applies to bookmarks. You can mark pages, so if you need to go back to a specific part of a large, long document or a book, you can do that relatively easily. If files come with rich tables of contents, this becomes less of an issue, but the important thing is, the functionality is there, should you require it. 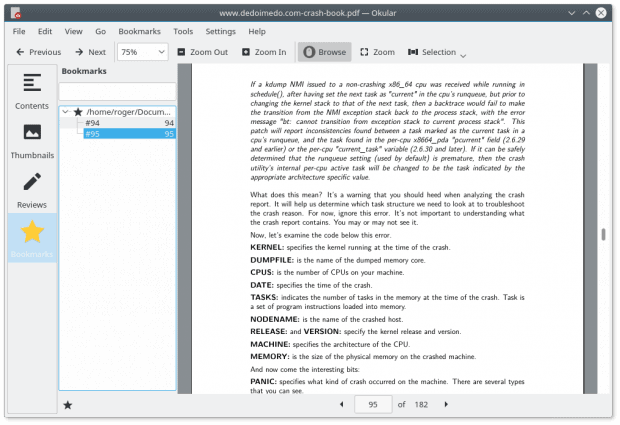 This was a puzzling one. On paper, it would appear that Okular supports both Mobi and ePub format, but when I tried to load a Mobi file, it showed as HTML source rather than a nicely formatted reading material. In other words, it seems that Okular either cannot parse e-books that well, or it’s so delicate that even tiny changes in expected format or headers throws it off balance. 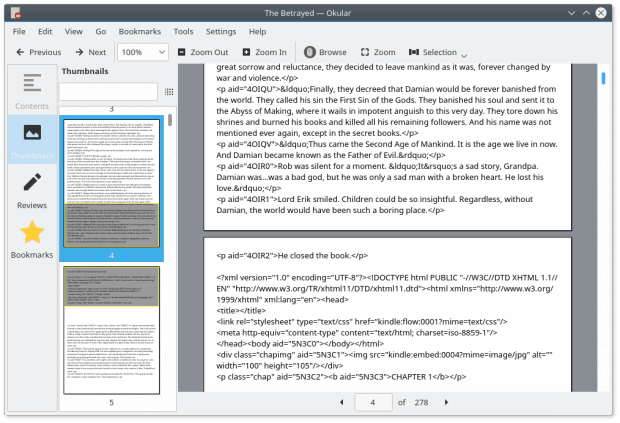 I even installed Calibre and converted my book to ePub, just to see whether this makes any difference. Indeed, it does, and I did make some progress, but some of the styling was off, which can cause issues or deter people from using Okular. In other words, if you need to read digital books in Okular, your best bet is ePub, but even then, you may not see the documents the way they are intended to be displayed. As you may have guessed, AZW3 format (Kindle) is not supported, at all. 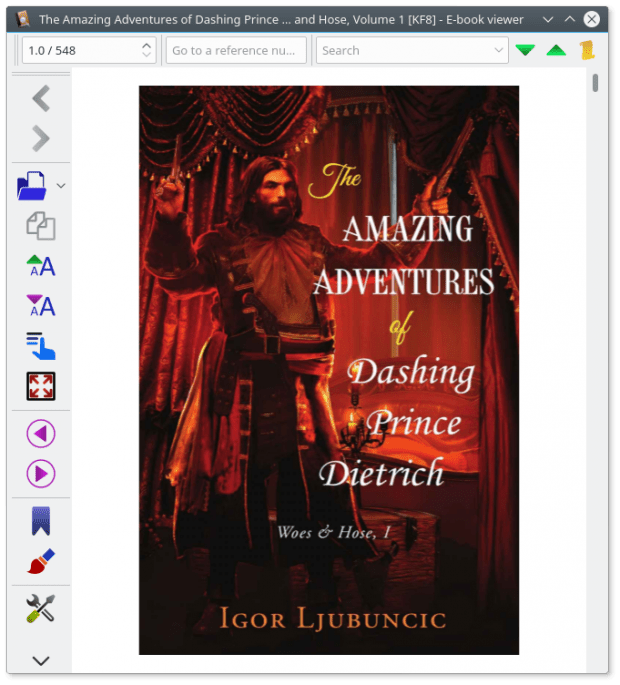 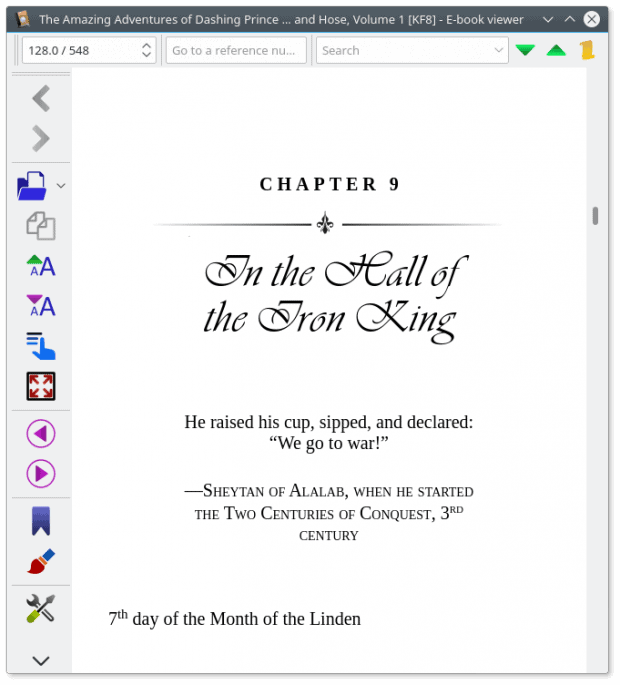 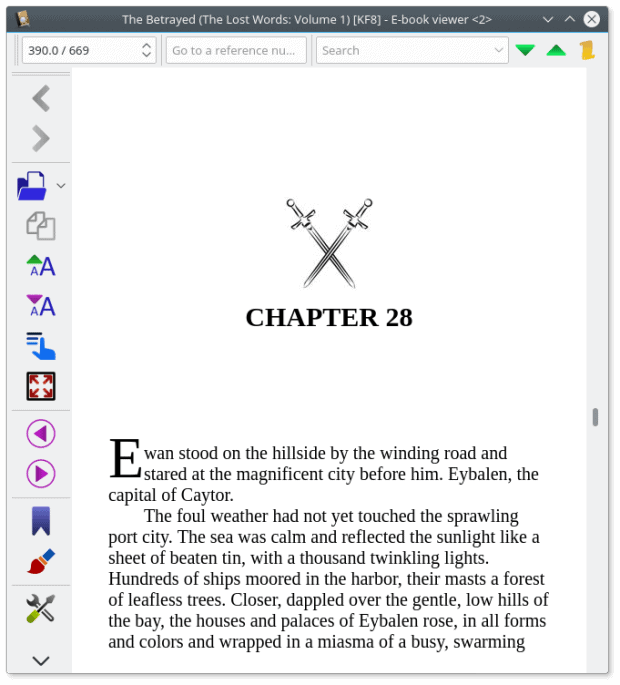 To make things worse, if you do have Calibre, it displays the e-books beautifully, in all formats. Even FBreader has some advantages over Okular, but there’s definitely a huge margin of quality and fidelity in file format support and display among these three programs, with Okular taking the bittersweet bronze medal. 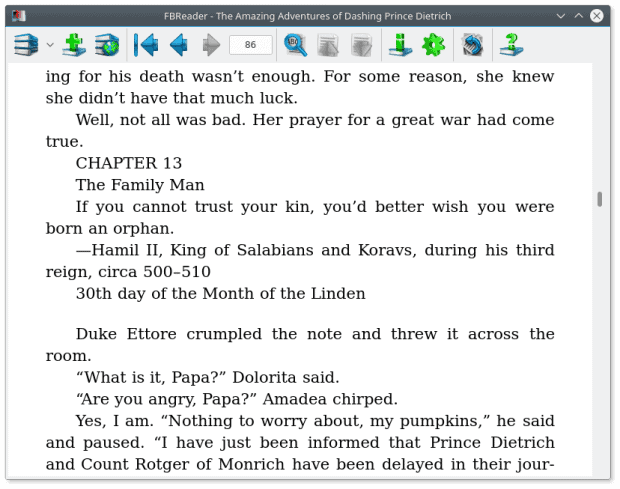 FBreader, Mobi, not as good as Calibre, but still better than Okular.

This seems to be the primary weakness of Okular. The moment I opened the file, it informed me that the document contains XFA forms, which are not supported. Indeed, the selection tool, as you’ve seen above, lets you mark and copy text or save images, but there isn’t a typewriter functionality. Annotations do not count, because they form an overlay, and there just isn’t a way to add plain, unframed text anywhere, forms or no forms. Basically, this means you will need to resort to Adobe Reader or maybe Foxit Reader for this kind of role, which sort of makes Okular redundant. 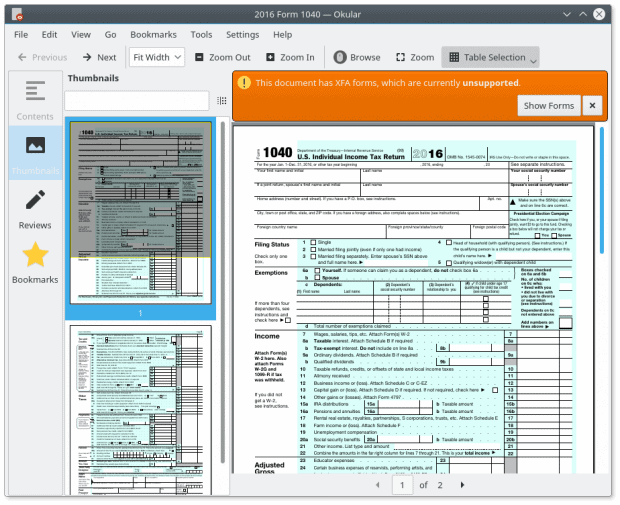 Okular comes with a hefty behind-the-sceen menu, allowing you to setup view ports for different document types. Sounds quite promising, but it turns out to be mostly font settings, and the actual support for different file types isn’t as glamorous as you’d expect.

You can make/ask Okular to obey DRM restrictions (I was not able to test this), use tabs, transparency and text anti-aliasing. The program also supports right-to-left reading, which sounds like an interesting feature. I don’t recall seeing (doesn’t mean it’s not there) this in some other Linux PDF software. 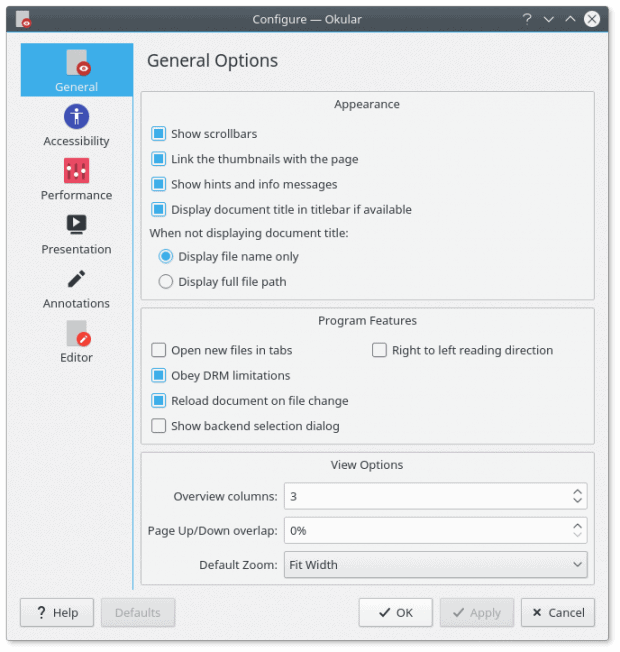 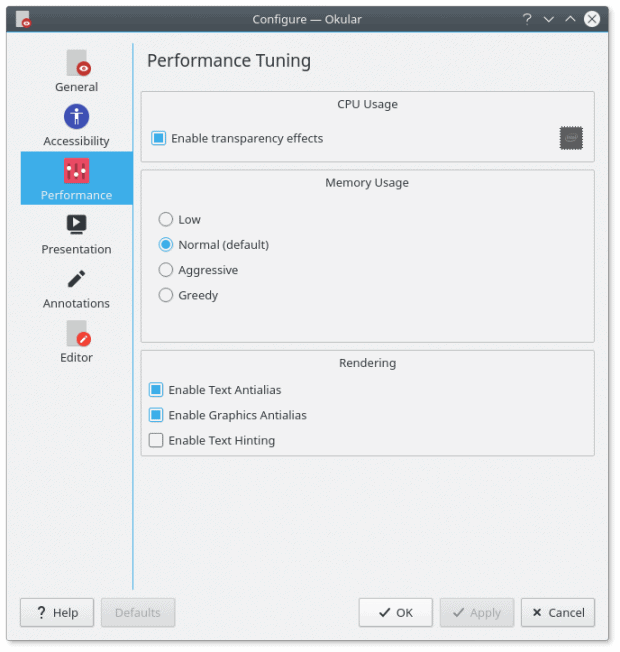 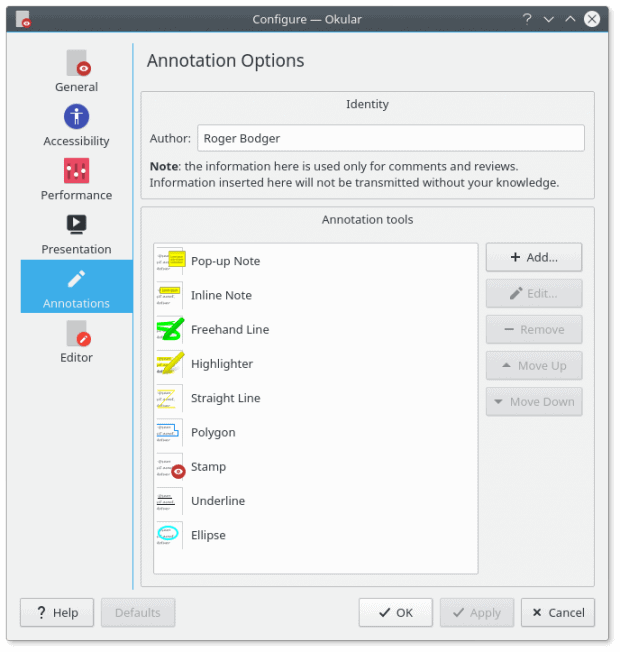 Well, a couple of times, I was unable to copy text to clipboard after selecting it. Once you do paste it, the block of text will have EOL characters based on your selection, so the sentences won’t actually be that, instead you will have a bunch of one-liners. This is true for pretty much any PDF program. And it’s wrong in every one of them. 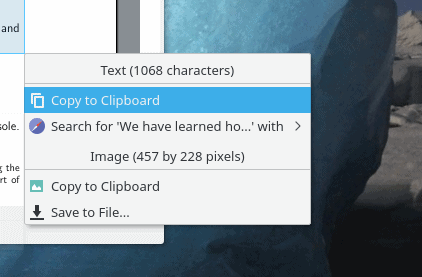 Each line is separate; the text does not wrap.

The table marker tool is another interesting, weird beast. It lets you select tables – and seemingly it did exactly that. I was able to copy the table into a text editor, and the entries were indeed tab-separated, which is probably the intended behavior. So you can actually export tables to spreadsheets, and such. However, I am not certain if this is what Okular should do. Some clarity is needed on this. 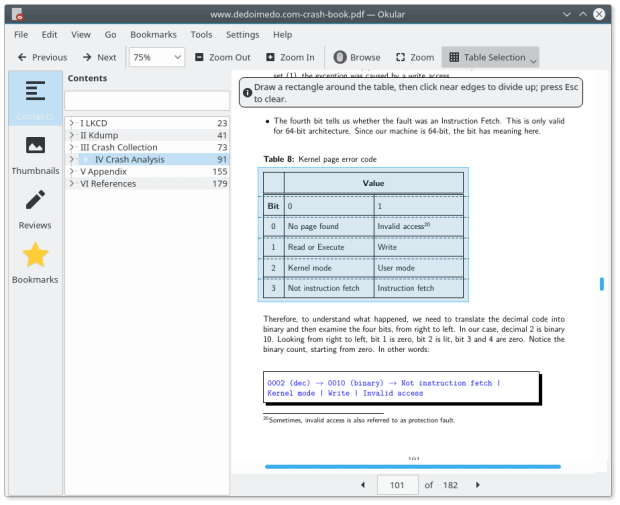 This is a little confusing; am I supported to mark lines so the program knows how to separate cells?

Well, if you ask me, the ideal, currently non-existent version of Okular would have not only the option to insert text, but it would also allow its users to convert files in a variety of popular formats. Perhaps asking for a full distiller is too much, but the notion of some kind Microsoft Office support definitely beckons. Or being able to export files (or print if you will) to some other portable formats.

I would also like to see Okular offer and support digital signatures as well as encryption, with KWallet and GPG/PGP integration, so that people can secure their documents natively. Again, there might be a whole tsunami of legal issues here, but there’s no harm in asking, now is there.

Last but not the least, cloud. Personally, I am not too keen on any online-software integration, but the world is bigger than me and my narrow-minded perception of what people requires, and some user may actually be interested, like or want to use this. For that matter, if a distro allows any kind of online account integration, Okular should be able to use this functionality, too. Dropbox, OneDrive, Google Drive, you name it. No need for any forced features, it can all be nice and friendly opt-in. It would definitely make Okular appeal to a wider range of users, and on a much more professional level.

Okular is an okay program. But it is first and foremost a basic reader for PDF documents, with some secondary support for e-book formats, quality not guaranteed. The rudimentary functionality is a little puzzling, since KDE tools are normally very rich. For example, digiKam has all the online integrations you can think of, but not Okular.

I also think it needs to step up its game, so it can participate on a more professional level with rival, mostly proprietary software. Annotations are fine, but we need cloud support, digital signatures, encryption, and text, text, text! What about Javascript? That’s another thing worth checking.

All in all, if you only occasionally need to read a PDF file or run a presentation, then you’re probably fine with Okular, and in this regard, it comes with a bit more functionality than most other Linux utilities of this type. But it’s severely lacking in the serious productivity space, and this is where future development focus should be. Okular and Linux as a whole. Anyway, I hope you liked this. See you around. 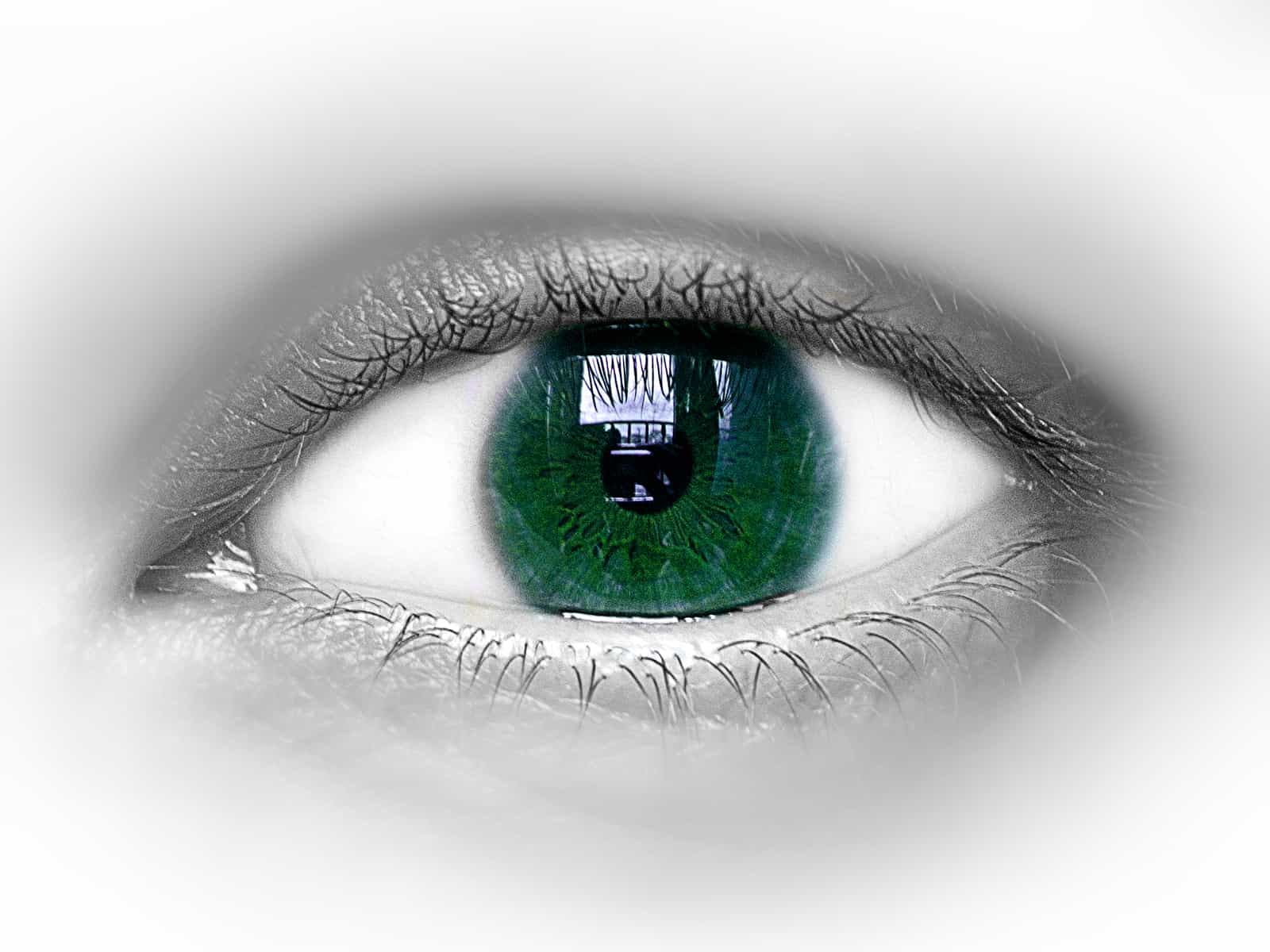