A bunch of days ago, the first stable version of Elisa, a new KDE-oriented music player, was released unto the wild. The program aims to be a simple, nice and flexible player, with good integration as well as cross-platform support. Sub-1.x releases of any which application are always tricky, but I still decided to give it a whirl.

Overall, the Linux world is over-saturated with music players, many of which offer only limited functionality, and just a few consistent programs that have survived the rite of time and steady use. In a way, this proliferation mimics the larger distro world, with hundreds of offerings, some with only minor differences among them, and usually something really cardinal missing. Which is what makes Elisa potentially interesting. Can it outplay the overplayed game?

To make sure I’m doing the best I can, I set Elisa up in KDE neon Stable Dev edition, which means lots of software with words like git and almost-current date version numbers. The program is available in the repos, so the configuration is trivial. Furthermore, once installed, Elisa features a separate configuration applet, which can be invoked directly from the system menu, or from within the program’s main interface once launched. The options are identical, and currently, extremely lean. You only get the option to configure new paths for your music auto-discovery or reset the program to defaults. Moreover, the settings menu comes with a rather 19th century adventure novel title – Elisa Local Files Indexer. 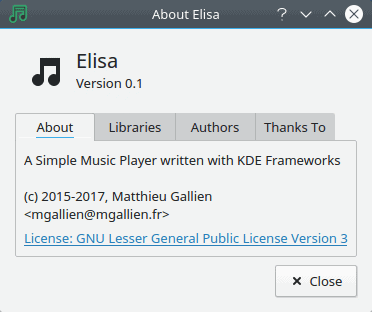 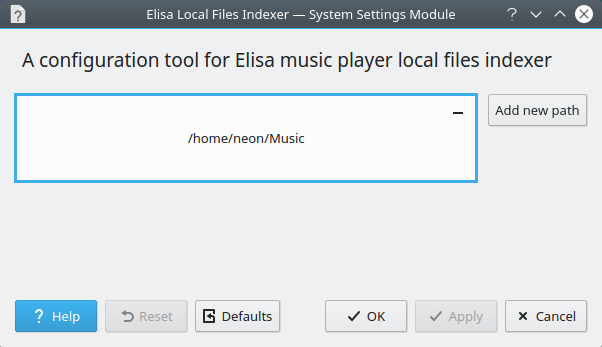 The main interface is simple, elegant and perhaps a bit sterile. It comes with the standard three-pane view that’s common for most music players, especially post-iTunes era, with a sidebar that lets you access different folders, views and such, the main area, and a playlist on the right. Somewhat like Amarok.

The interface does not allow you to resize the panes just yet – and in default mode, it cropped the text Now Playing on the left. This creates a jarring visual effect, and you need to resize the player horizontally by about 10-15% to get the text just right. The entire interface resizes proportionally, so this makes for an extra annoying visual setup. I do believe this will be rectified in future versions, but at the moment, it is what it is. 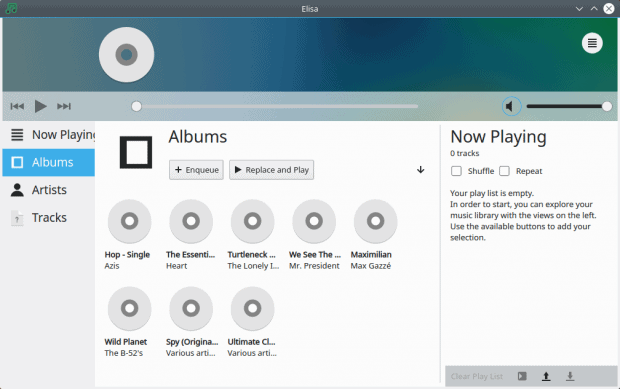 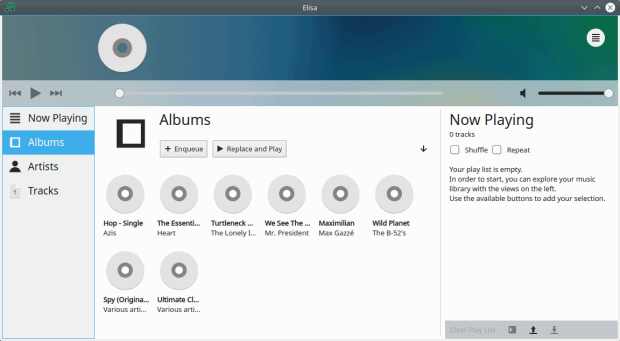 Looking at the official screenshots, the main interface shows with awesome album covers. No so with my own test. I do not know why the cover art was not shown or discovered, but I only had the generic CD art. I tried sorting the songs by album, name and whatnot, none of that made any difference. 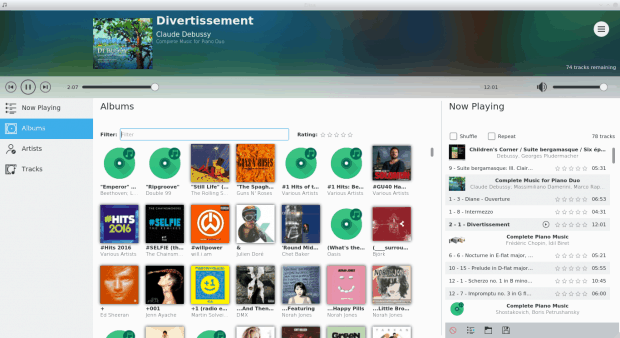 Official screenshot; why don’t I have all these lovely colors?

The usage is straightforward – select the songs you want to listen to, hit play. All good. You can shuffle and repeat. You can also upload and download playlists, or clear the existing one. Now what this will do is remove songs from the list – but also stop the playback, which is kind of unexpected. 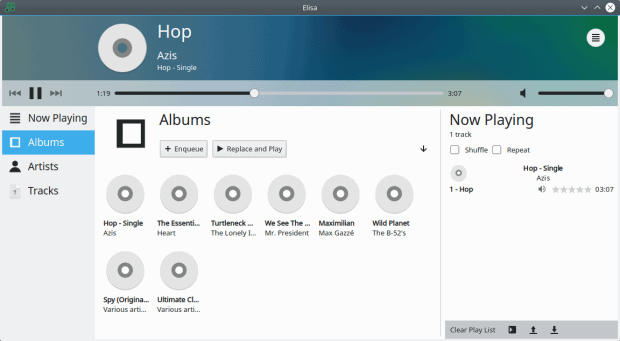 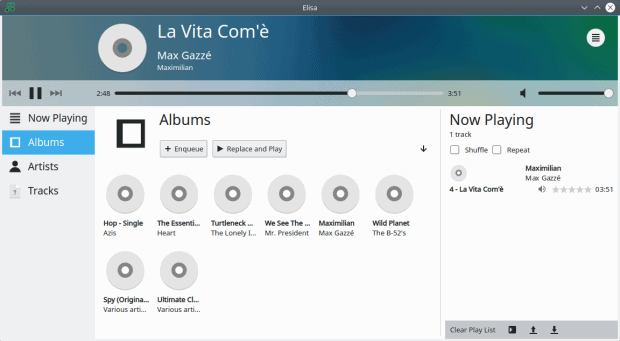 I was able to check the track metadata, but the star rating did not work – the interface did not respond to my click attempts to rate different songs. There’s no right-click, and no option to change or edit the tracks in any way, like say search for cover art, check lyrics or more. And herein I believe lies part of the problem with Elisa. It is trying to be unique, which means it should not replicate the settings and options available in other music players, but then it offers partial functionality. On the other hand, there’s really no point developing an application that will have the exact same set of options like all other players, because what’s the point. 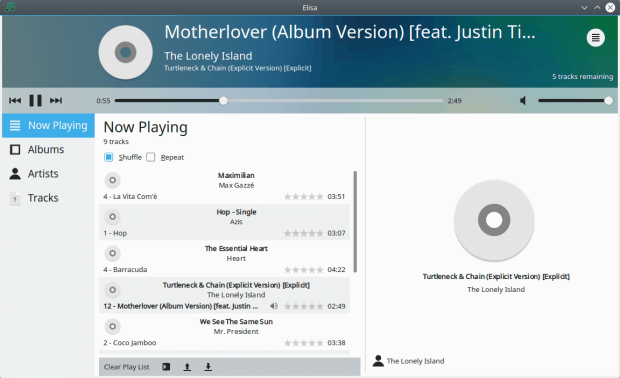 All in all, it did what it could, but it’s a far cry from what I’d expect from a music player. I’m definitely not an audiophile, but there are things that should be available in every multimedia program, even if you don’t always use them. 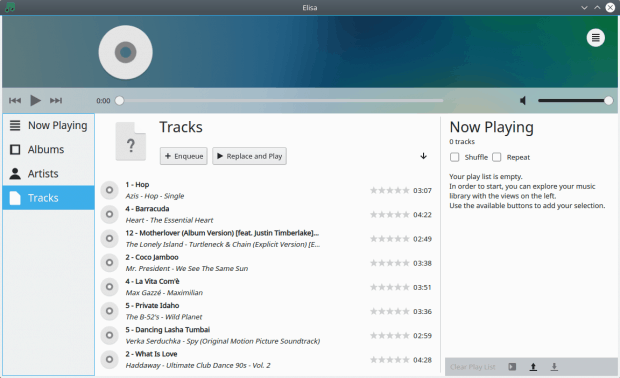 Well, cover art. Nothing that lets you source or sync music from remote shares, online services, or external devices, like perhaps smartphones or media players. I’d like to be able to check lyrics too. Not critical, but it’s a nice extra. The settings should also allow some level of customization, and the ability to minimize to system area on close, so that song can resume playing.

I also believe the overall layout isn’t pure KDE. It does feel Plasma, but it is different from most other programs available in the Plasma set, probably because it’s still new and missing lots of the features. It’s not a bad start, but then, first impressions are everything.

Do we need another media player?

So there’s a question for you. First, let’s start with a comparison. VLC, for instance, is a powerful workhorse, which can look and behave simple most of the time, but also do a whole lot of complex stuff when required. The other example that comes to mind is Clementine, a fork of the pre-2.0 Amarok, and it’s a very flexible, colorful and fun media player. It has all the bells and whistles, but you can also use it as nothing more than a shuffle deck of songs, without bothering with art, metadata or alike. The full spectrum of options and capabilities is there, and you can ignore it if you want to. 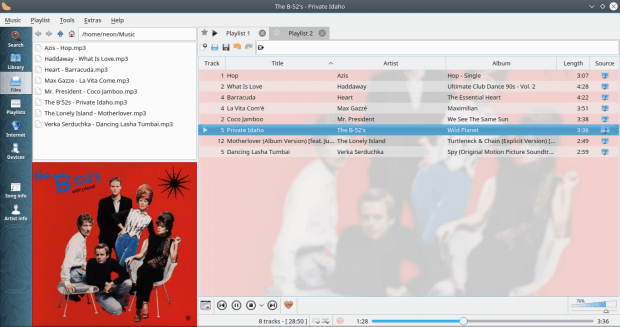 Then, even if we ignore these two – which pretty much satisfy 99% of all use cases out there – the question is, why does Plasma need a new media player? Is it currently missing one in its stack? Amarok is sort of stalled, true, but Clementine is alive and kicking if not fully Plasma in its spirit and nature. From that perspective, Plasma is missing a native player. But then, apart from the need to have things orderly, that’s not enough justification for adding yet another application of this nature into the Linux arena. The same can be said of other software, like browsers – QupZilla slash Falkon for instance.

I do think desktop environments should be fully and wholly self-contained, and that means a complete app stack. But such applications should be superior – because ultimately, no one will use them. Microsoft Edge on the desktop is a great example. Part of the stack all right, but most people will download and install Chrome or Firefox as their first Windows 10 activity.

Elisa may satisfy a commonality need – but it also needs to be awesome. Then, should the energy be invested in making a new player from scratch, or perhaps integrating or extending existing software so that it fits well into the KDE world. I believe 90% of all open-source projects are redundant, as they duplicate functionality without offering anything new, and that’s something that Elisa needs to avoid if it’s to grow and thrive. What is the actual need behind the development? Is it dev-oriented or user-oriented? Because I don’t think people are missing music players, or even good music players.

That’s something that the project needs to figure out while it’s still in its infancy. The changes will become much more difficult once it hits the 1.X release.

Elisa is an early beginning of something that might one day transpire into a good, meaningful, exciting project. Or become yet another pile of code created without a greater strategic imperative aimed at satisfying a primal need. At the moment, it’s a bit early to tell, but the initial showing is just okay. Reasonable looks, reasonable behavior, some bugs, and simple functionality that is neither here nor there. I would like to see more. Better yet, I’d like to see something new and unique.

In other words, think, what would make you switch? What would make you abandon your current music player and opt for Elisa as your primary choice? And what does it have that we haven’t already seen or tried in dozens of other players? At the moment, not much. True, another effort does not hurt anyone, and why not. But then, why not is not the foundation on which greatness is built. Plasma is taking off, and recently, it’s become more robust, more consistent, more professional. All and every future effort needs to align to this core mission, and Elisa should follow suit. This beginning ain’t bad, but I want more. Worth testing, just don’t expect any miracles. To be continued. 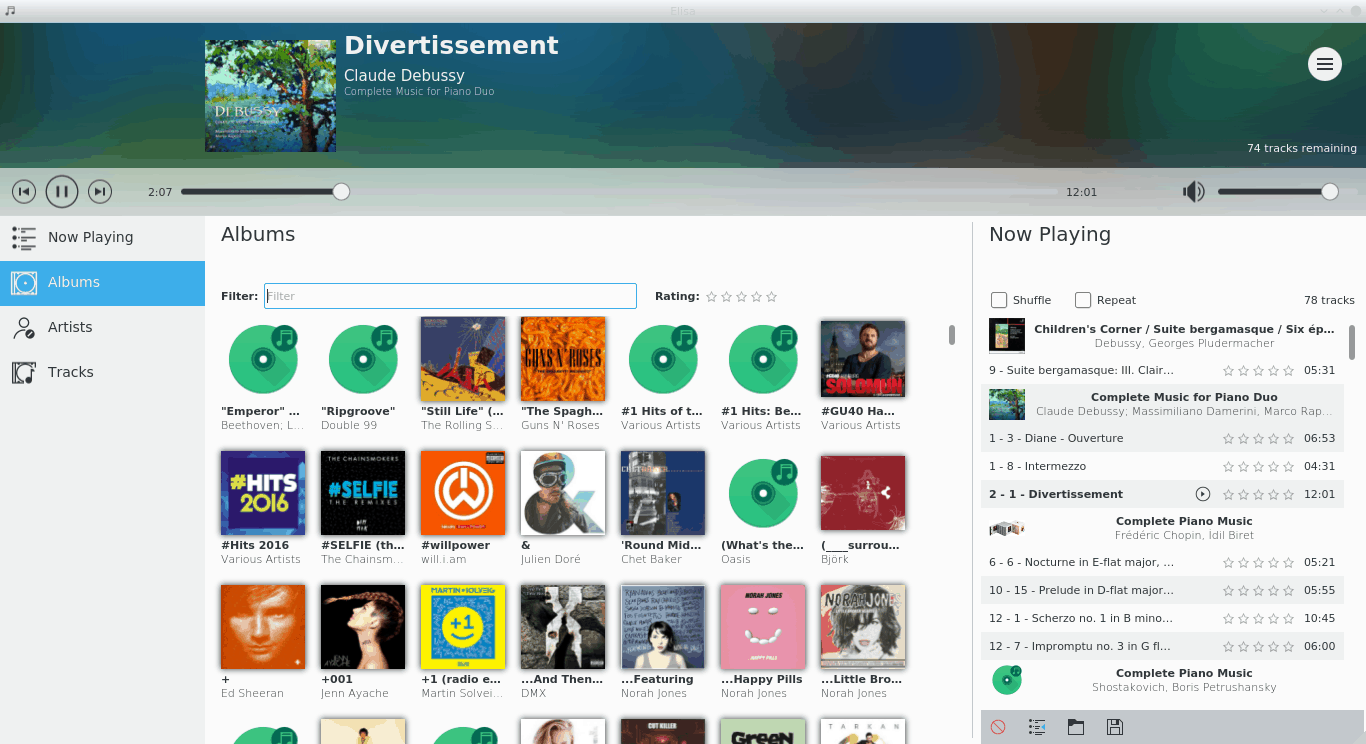