Last year, I decided to do a thorough analysis of the KDE and Gnome application stacks, separately, to figure out how complete these two desktop environments really are. I looked at the different application categories, weighed the major advantages and flaws in the popular software, examined some unique entries, and then also talked about what’s missing, the obstacles that keep these environments from being fully independent and 100% user ready, so to speak.

I’d like to examine Xfce next. After all, this is the third most popular Linux desktop environment, barring forks of the other two, and so it merits its own moment of spotlight. But at the same time, Xfce has never really deliberately prided itself at what it can do and offer. It’s always hung to the back, sort of shying away from publicity, being modest and frugal in all aspects. So when you think about Xfce, you don’t normally think about the application stack. You could say it’s a lightweight, simple desktop, but can you name five pure Xfce programs? Aha. Let’s see.

This is a horrible cliche, but it reflects, in a way, the confused state of truth about Xfce software. While anyone could reasonably quickly find a semi-definite list of KDE and Gnome applications on their respective portals, doing this with Xfce is more difficult. Doable, but just like the anti-promo angle the desktop has, the applications are also safely tucked away from the public eye.

I did manage to find the list of recommended apps on the Xfce wiki, I also stumbled across the Goodies page, which gives some more detail, plus a few relatively old articles from a few years back. The search engines also gave me my own analysis of non-KDE non-Gnome apps from a while back, so there’s that. In a way, this article may be incomplete even before I started writing it. Therefore, if you feel like it’s sorely missing, please tell me, because I’d love to be able to come with a nice, definitive, and, above all, practical list of Xfce programs. Now, let’s commence.

Midori is the name of the Xfce’s Web thingie. It’s WebKit-based, so it should be able to do all the modern things fast and true. Well, yes and no. Like most non-mainstream browsers, it has a somewhat weird look & feel. I’ve mentioned this when testing rekonq, I spotted this when using Falkon. There’s something in the UI design that feels … different.

I also noticed the UI font was grainy, as though it wasn’t using the system AA settings. I tested this in MX Linux Continuum, which was my guinea pig bed throughout this experiment. Then, on Youtube, there was a volume icon overlay artifact. It looked like some undefined blob or rectangle, but with the mouse over, it would go back to the normal state. I noticed a few other oddities like that here and there.

But it is quite nimble, it’s got a handful of built-in plugins and extensions, like adblocking, for instance. Only the list is nowhere near as colorful as what you get in Chrome and Firefox. So this is a neat little browser. However, I don’t know know how to pitch it. 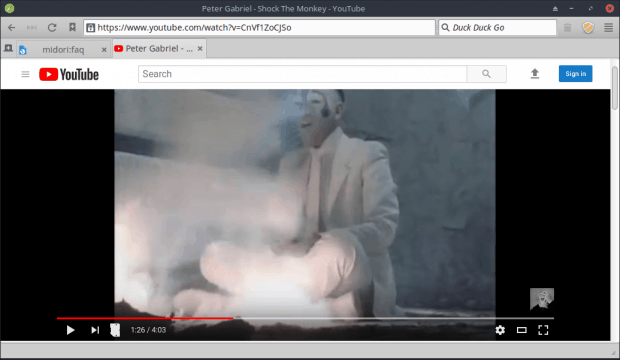 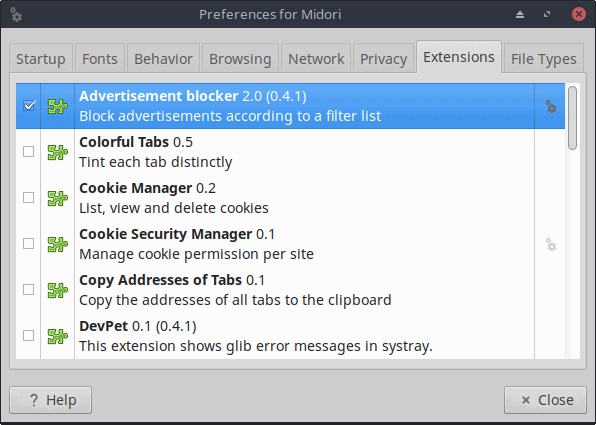 Another important application. Here, you get Parole. It’s a decent tool, and it handles audio and video all right – it does struggle with metadata and cover art from external media, like smartphones, though. However, it doesn’t get too many updates, and the feature set is a bit slim. Again, focusing on the Xfce philosophy, it works well, it’s restrained in its mission statement, and it’s not resource-gluttonous. The real difficulty is showing it to people and having them sold on to it. 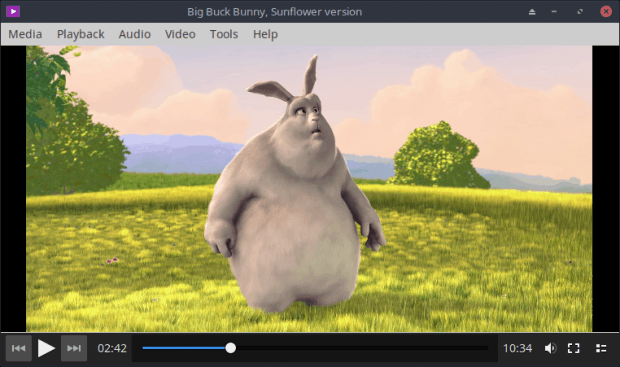 There’s a big gap here. Well, frankly, all desktop environments have the same issue. Nothing like a complete, fully featured suite. You do get Abiword as a lightweight alternative to LibreOffice and friends, but it’s not quite as powerful, nor has it seen much active development lately. You may also rush and say Gnumeric, but that’s a Gnome program, I’m afraid.

Orage is the calendar application, and it looks quite simple and rudimentary. You can sync the calendar, but this only works with offline calendar databases. There does not seem to be an option to actually sync up with any of the popular online services. Speaking of online, I’m not aware of any online accounts functionality equivalent in Xfce, so I’m really not sure how this would work. 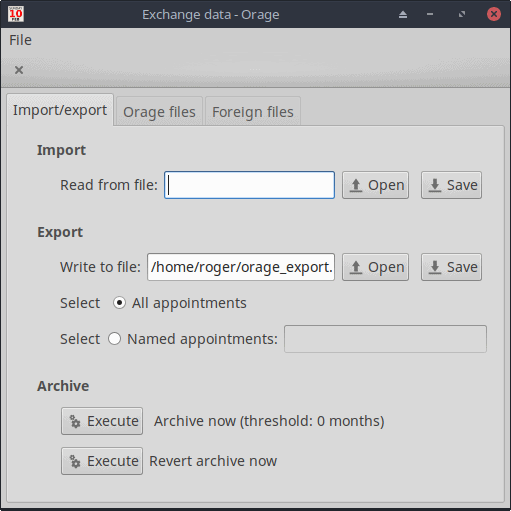 Mail wise, I’m drawing a blank. Help me out, if you know some.

This is where there’s some heat. Ristretto is an old name, and it’s one of the sturdier players in the Xfce arena. The program is simple, but it’s also one of the more complete and robust applications in this small stack. You have the large thumb preview scroll bar, you can perform basic functions with your images, and it’s reliable and handy. If you don’t require any massive changes to your images, this is a decent one. 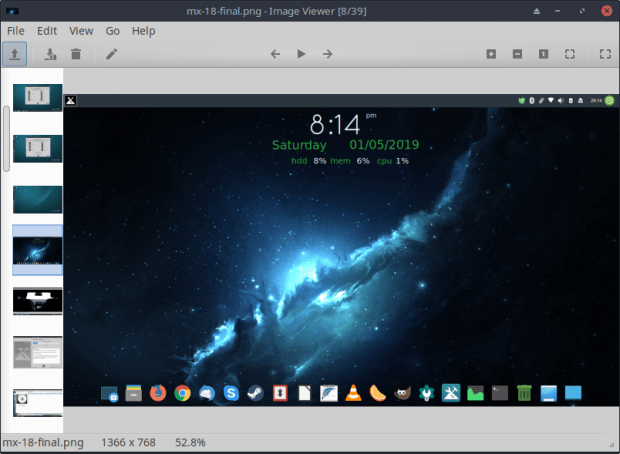 Thunar is a dope name for an application, and Thunar is a solid file manager. It comes with the modern stuff you expect – tabs, sidebar, bookmarks, bulk rename, version control, it can connect to remote shares, and then some. But it is not without foibles, mostly workspace customization. One of my pet peeves is the inability to shuffle the order of elements in the sidebar. The devices category is always located at the top, so your bookmarks and folders will be lower down. Trimming the list is a task of individually hiding each and every entry. Overall, though, it is one of the more mature and complete Xfce programs. 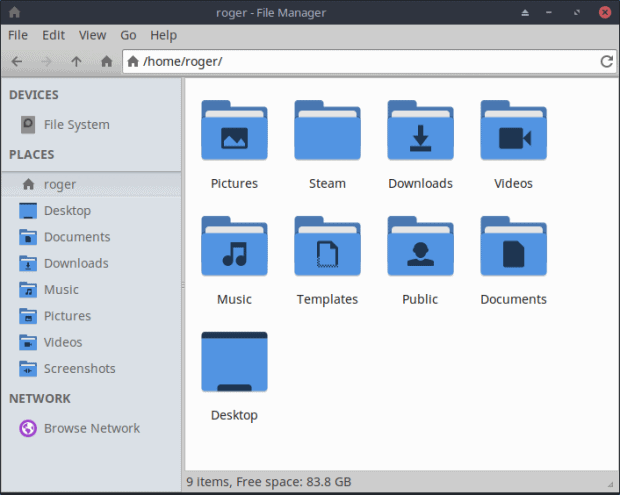 There be confusion here. Because I’m not sure which of the pads is the right pad. For many years, and probably still, Mousepad used to be the default text editor. In MX-18, a different lightweight editor, called Feather, was included. It’s the second part of the name that led me to believe this could be an improved fork slash successor.

For a small, simple tool, it comes with some rather clever tricks. You have tabs, of course, you can save and restore your document sessions, use a side pane for navigation, there’s syntax highlighting and then some. It looks and behaves well. The only thing that baffles me is where it fits in the larger scale of things vis-a-vis Xfce software. I’d like to believe it is indeed part of the arsenal, if only because of the name. 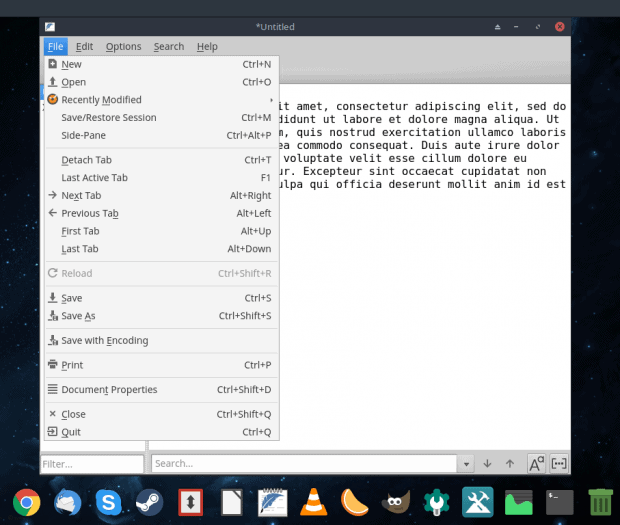 The Xfce terminal emulator is an okay program. Perfectly functional with a somewhat baffling workflow. You access the preferences via a right-click, and in there, you get all the expected bits and pieces you see in pretty much all the rival software. Hard to spoil this one, and indeed, it works well. 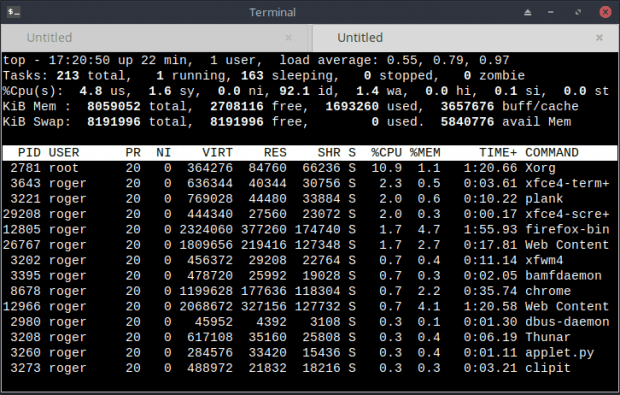 Aptly named Screenshooter, this Xfce app is a solid little surprise. You surely remember all my woes and complaints about the inadequacy of screenshot programs in Linux. Screenshooter is simple and does the job well, plus once you’re done capturing your screen, you can then even export the images. In a way, it straddles the area between the more fully featured Spectacle and the straightforward Gnome Screenshot. 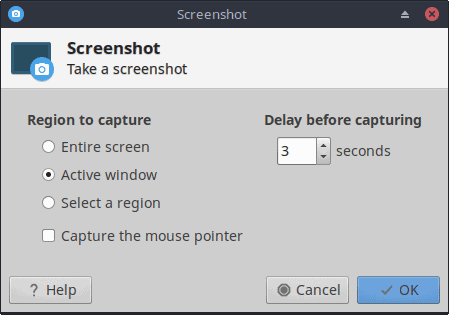 Some things are missing

The one thing that really baffled me is the lack of a dedicated software manager or package manager. This is true of most desktop environments. For example, MATE only recently got Boutique, and it is a splendid piece of software. But there’s no such Xfce tool.

I am also not aware of any Xfce-specific educational tools or instant messaging clients. There’s no virtualization or digital camera software, either. And that’s fine, there’s no need to reinvent the wheel. But then, this diminishes the core appeal of Xfce as a unique, standalone thing.

Then, just as I was about to mildly despair, I found some more software in the MX Linux arsenal, which could be potentially attributed to Xfce. One is ClipIt, a clipboard manager for GTK+ desktops, a category that also happen to include this environment. Nowhere near as cool as the clipboard in Plasma, but it works well. Qpdfview is also on the list. Simple and functional. 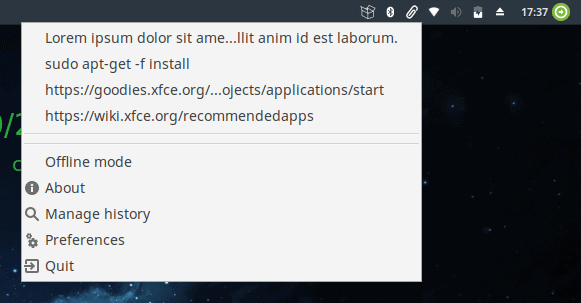 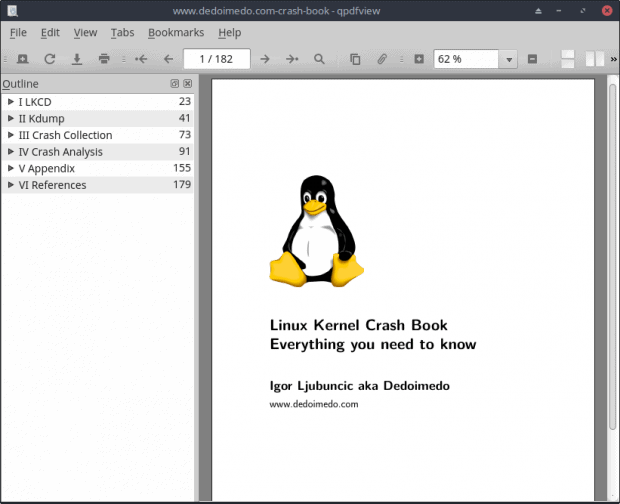 Lastly, and this one is definitely Xfce through and through, we have Xfburn, a CD/DVD burning software that truly does give the desktop environment its own twist. Alas, in this modern age, the necessity for optical media is dwindling, and with it, the appeal of a program like this.

But in essence, that’s it.

Now, you may be asking yourself, well, what’s the reason for this dearth of Xfce software? The answer is, it’s hard to actually classify software as such. Because if you use either Qt or Gtk, you might as well end up developing a KDE or a Gnome application. There isn’t such a thing as an Xfce framework, and therefore having an independent software stack makes no architectural sense. This also makes Xfce software, when it is developed to co-exist with the desktop, rather invisible.

The other problem is, there’s no cohesion. Plasma does this quite well, Gnome manages somewhat all right, despite a more simplified application stack, but it’s hard to pinpoint a unique theme to Xfce software. There is no set of guiding principles that can be described as quintessentially Xfce.

Thus, we end up with a short list of programs that feel like an attempt to make Xfce into a full ecosystem, but it never evolved beyond an initial idea (if there ever was one), and a small handful of programs that are mostly independently owned and developed, with very little integration.

If you think about it, Xfce is the closest thing to the Windows desktop. It’s a background onto which you stick your applications, any which way. The default set is fairly forgettable, just as it is in Windows. But then, it is also a product in between KDE and Gnome, as it has elements that you find in both. Maybe that’s the problem. If you want a Windows-like experience, KDE gives you the layout you expect plus some really nice software and a very consistent setup. If you want something more Mac-like (to a degree), Gnome has always aimed to be that solution, even though Gnome 3 is going in a completely different direction. But it still comes with its own software, and it’s more cohesive than Xfce.

This really puts Xfce in a difficult spot, when judged by its own merit. Sure, you can still install and use any software you like into this desktop environment, and then the defaults do not matter anymore. But the purpose of my article was to examine Xfce detached from the rest of the Linux world. On its own, it’s not a fully self-sufficient, independent entity. If you were to make your Linux experience Xfce only, you’d struggle. The same is true with the other two, but to a lesser degree.

Xfce isn’t a bad desktop. Far from it. But it could benefit from a more consistent UI across the software, much better integration with other programs and possibly online services, and a clear definition on how the stack should look like. At the moment, anything goes, and that de-focuses the message. I’d like to see Xfce flourish. It had a really good couple of years around 2015-2016, and then stalled a little recently. It would be nice to have another strong, vibrant, dominant desktop environment. It’s not that we need fragmentation, but that won’t go away, so we might as well enjoy high-quality stuff. Well, let’s see what happens. Once again, if you have Xfce recommendations, please fire away. 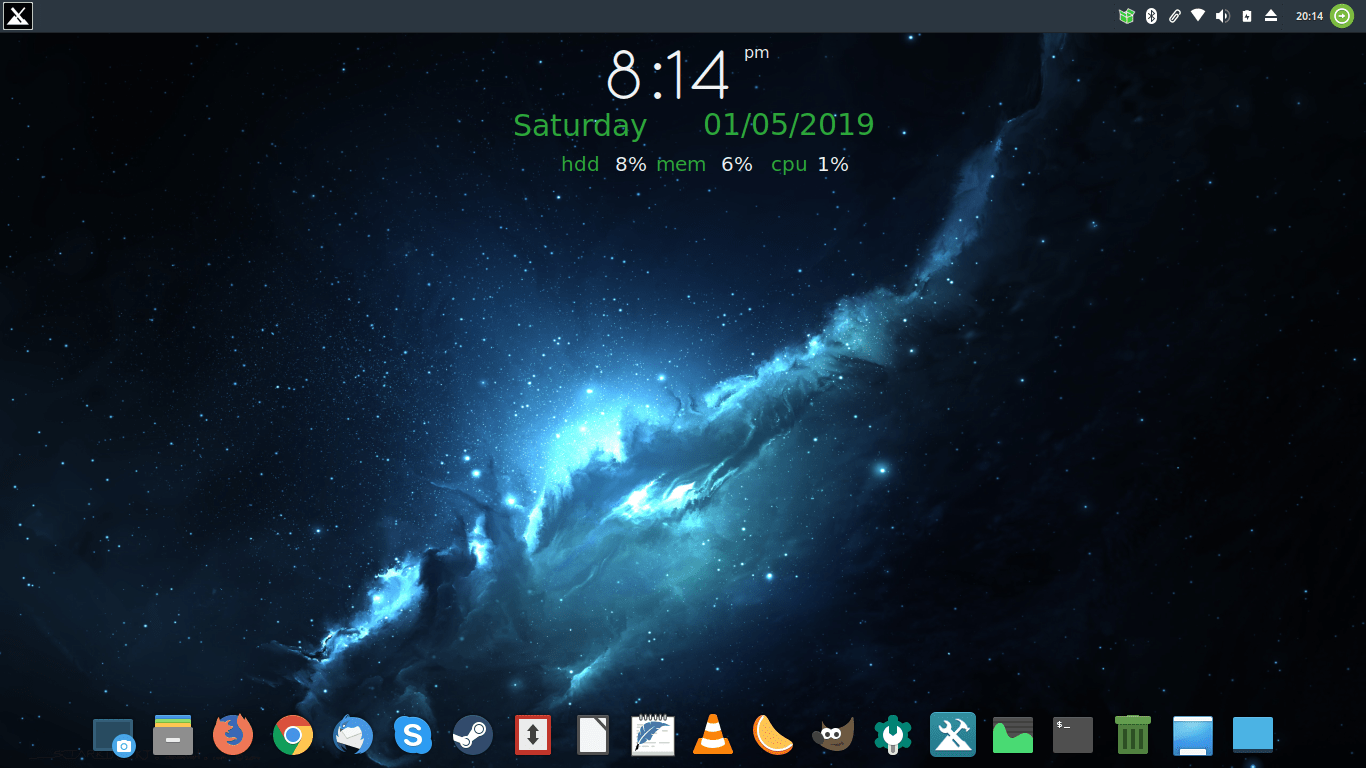