Regardless of the factual conclusion of this article, you are already sold on it just based on the title. Anyway. Humans are really good at solving problems, especially, or possibly only, if they are linear. It is not a coincidence that we have manuals that follow through a simple top-down logic or that navigation systems use turn-by-turn instructions. Square root of 7443 anyone? But this is not a biology lesson. And yet, it is.

Operating systems are designed to help users translate their linear thinking into instructions. When they do this successfully, we have what we call intuitive interfaces. When they don’t, we have nerdy things that no one wants to use. The system menu is probably the most important ingredient of any desktop, as it’s the gateway to all we do on a computer. Most of these solutions are linear. Things go bad otherwise. Just check my Fedora 18 review for a quick reminder. Windows 8 anyone? Now Linux wise, there’s also this thing called Gnome Pie. It’s a radical answer to the idea of a system menu, and a challenge to the whole linearity concept. Does it work?

It’s a Gnome tool, so I decided to test on the most proverbial of Gnomes – Fedora 24. This circular application launcher is available in the repositories, so you won’t have to do any special magic to get it installed.

Once I had it setup, I launched it – and then nothing happened. It turns out, the utility had started, but it was hidden from view, awaiting keystroke combos. However, I was not aware of this right away, and I spent a good nine second thinking what I should do next. So I decided to tweak the tool preferences first, which also coincidentally resolved my enigma. But it would be cool if Gnome Pie launched the first time in at least some kind of symbolic fashion, so that users can configure it and then follow the standard usage methods. Compounding my problem was the fact Gnome Pie did not have any icon.

The settings menu lets you define and customize pies. Each pie is a selection of application launchers or commands – think circular docks with widgets – which you can use to govern different aspects of your system. Start programs, manage multimedia, use it as a standard menu, and more. There are several pre-defined pies, and they were (mostly) showing with the right system icons. Some things look weird or like duplicates, though. 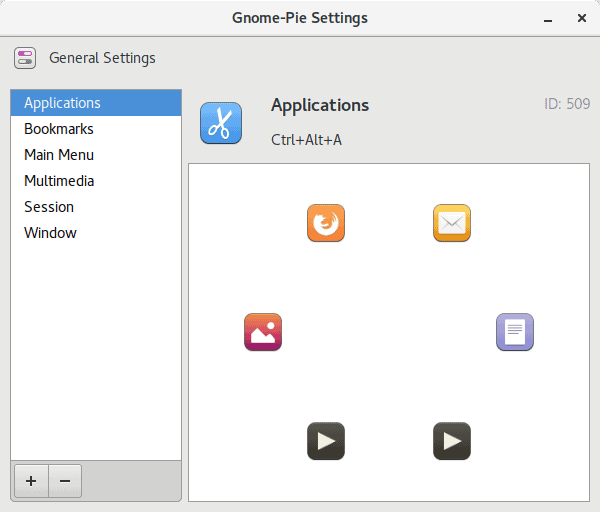 The general settings actually let you define the behavior of the entire tool, including the appearance. Strangely, the Unity theme is the one that is selected by default, so I changed it to Adwaita to match the Fedora defaults. Then, I started playing with Gnome Pie, getting it activated with the hotkeys. 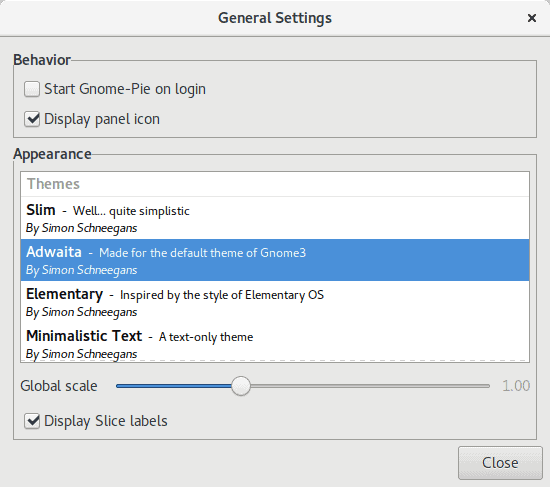 This proved out to be a somewhat frustrating experience. Normally, when you want to invoke a menu, you would either use your mouse to search, but then top left or bottom left corner is usually where the activity happens, or you would use the keyboard and type. Combining the invocation method with the keyboard and a subsequent mouse search is confusing. Gnome Pie renders wherever your mouse pointer is, and this goes against the linearity principle we discussed. The Fedora version of the tool did not have the option to customize the position or the shape of the pies. 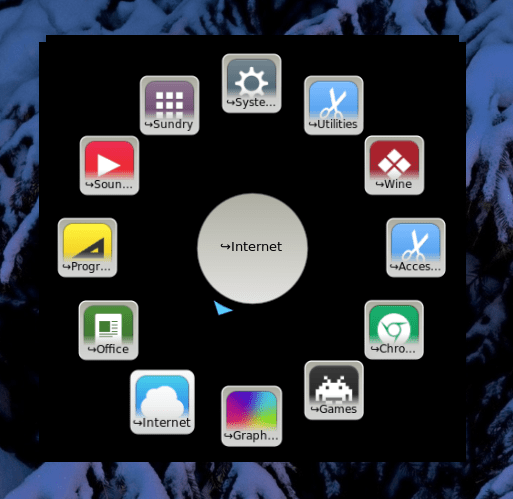 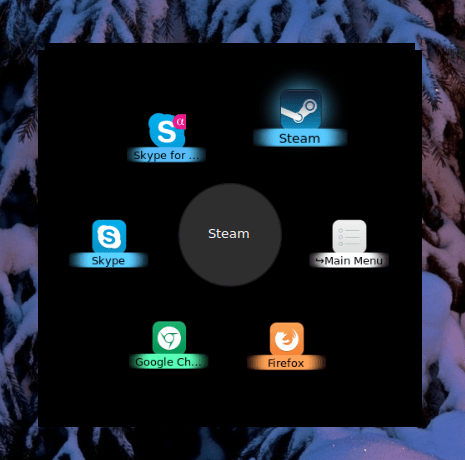 Gnome Pie also reacts to all subsequent clicks. Unlike some other popup menu methods, where the mouse click away from the menu cancels it, re: Openbox or even any standard Linux menu launcher, with Gnome Pie, even if you do click far from the rendered circle, something will be launched. Unless you hit the Escape button. Distracting. And definitely not as fast as expected. The whole flow is erratic.

I tested several pies and tried different themes, and the presentation layer was – weird at best. The pie did not have the necessary transparency, even though it should, and the black background rectangle had tiny chips in the top left and right corners, but not at the bottom. This feels like a bug. 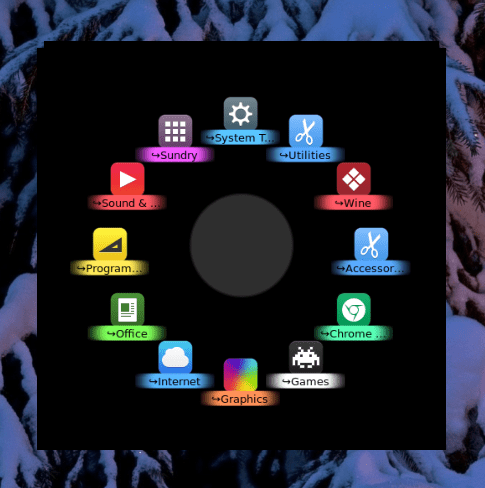 My next step was to try a different desktop environment – with some Gnome roots. I chose Ubuntu 16.10 for my experiment. The results were quite different from the Fedora escape. First, Gnome Pie did have a Launcher icon, and it also integrates into the system area. Second, it has more options, including the ability to customize the aforementioned position and shape of pies on the screen. There were simply more features available, and I am honestly not sure why there should be such a marked difference between the two. Last but not the least, the desktop transparency piece. With Ubuntu, the pies were transparent, and this made the whole thing look so much better on the desktop. The awkward invocation method and the disruptive work flow remained, though. 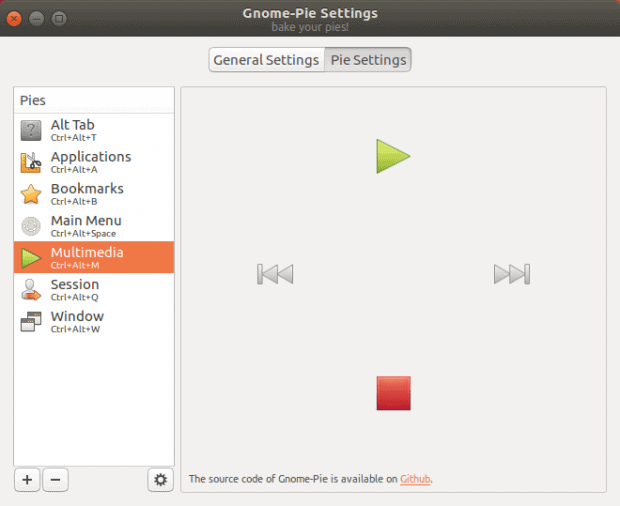 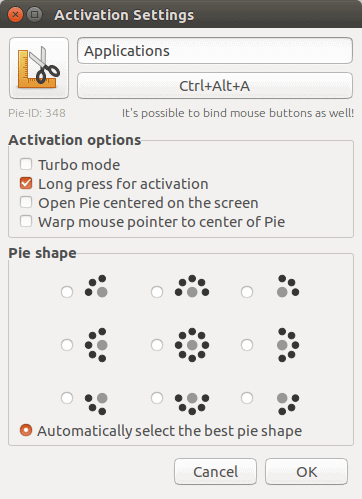 You can choose how and where to activate the particular pie, and decide how it will show on the screen.

The Ubuntu version also had a bigger selection of themes – and there’s a link to an online tutorial on how to create them, except it directs to a 404 page, which was probably last relevant about 18 months ago. I cannot escape the feeling, despite some recent media buzz, that this tool has not seen much fresh new development activity in the last year-and-half. 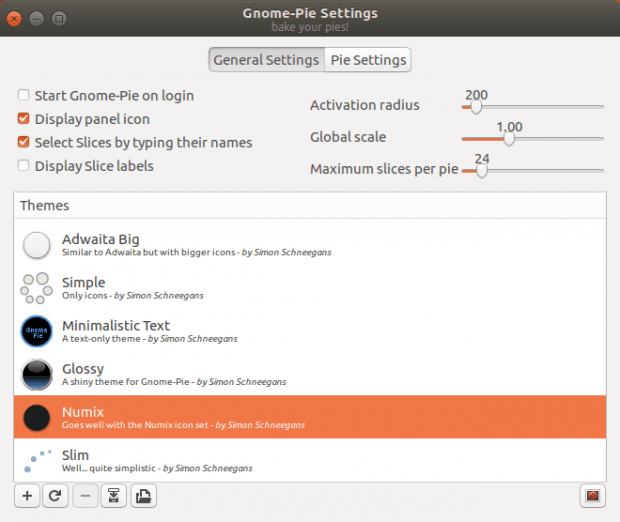 The Ubuntu version has more options.

I tried the different themes and they do provide for a little of colorful fun. I also tried using Gnome Pie for normal desktop activity, and found it lacking in speed, precision and accuracy of the standard methods, be it the popup text-and-icon menu or application shortcuts in the Launcher. The pie overlay was also extra distracting, as it covers whatever is underneath, and in some cases, the ability to see your work might be of critical importance. This also ties into the mouse capture and accidental clicks, all of which steal from your attention and patience.

Why them question marks?

The Unity theme is not quite as pretty as it should be. 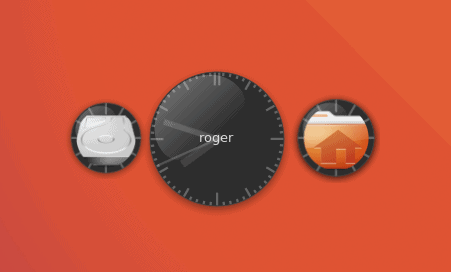 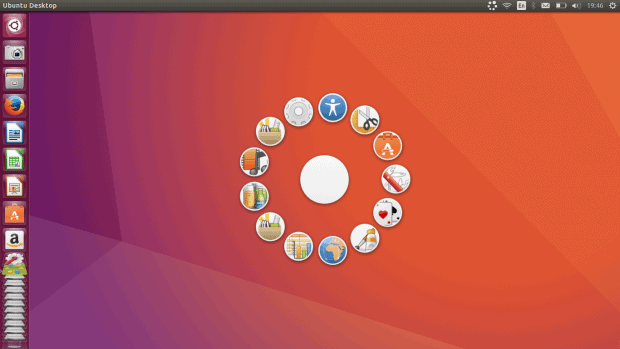 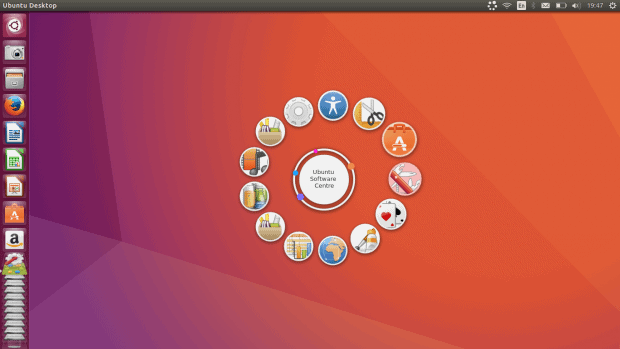 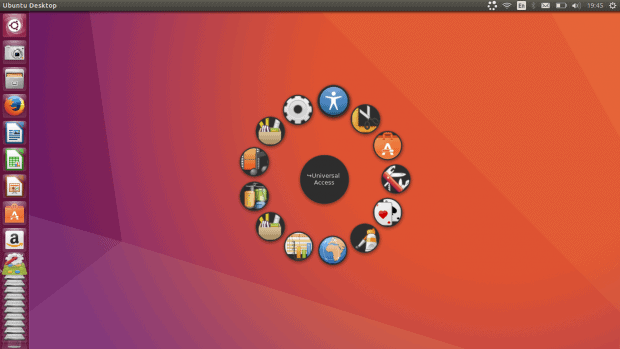 At the end of the day, I was asking myself, what was bothering me really? Was it the way the menu was presented? Was it the use of the keyboard and the mouse in a less-than-seamless way? Something else? My guess it, it’s a combination of both. I was seeing things the way I did not expect them. The circular fashion of pies creates a no-start no-end logic, and that is counter-intuitive in my book. Computer work must be deterministic. OCD wise, having things sprout on your desktop ever so randomly is another no-no. Especially if they do not conform to a specific aesthetic format. And then, there’s the question of pure speed and efficiency. Shortcuts are a single click deal, done. Menu is a single key or click deal, followed by a fast search. Gnome Pie is … well, multiple clicks or key combos, followed by some strict mouse cursor control. It just does not flow. It works, but you don’t have the same automatic fluidity like the existing system. Part of it is habit and muscle memory. Part of it the way our brains are wired.

Having spent a short yet significant amount of time with Gnome Pie, my immediate, intuitive conclusion, the one that works in subconscious patterns of human-universe linearity, is that this tool works against our brain. It allows us to achieve what we need, but the way it takes us there left me uncomfortable. Perhaps my brain needs evolution and fresh synaptic connections. Or perhaps I value my efficiency too much.

From a purely technical perspective, Gnome Pie has quite a few faults. The Fedora version is quite different from the Ubuntu one, and it seems to carries a handful of bugs. It is less fully featured, and the background is not transparent. Ironically, the non-Gnome setup worked better, but it comes down to playing with themes, which gets boring after a while, and then you’re left with a circular application launcher that is neither as fast nor as visually searchable as the classic alternatives. You cannot beat a standard menu and shortcuts. We have spent thousands of years reading text in a certain fashion, and regardless of the alphabet in question, it’s always horizontal or vertical lines. Never quite in circles.

So the concept works, it’s novel, it’s exciting, it’s also cautiously pretty, but it is dangerously alien to human thinking, and this is why I struggled with the puzzling implementation. I would also like to see the first-time configuration polished, those Fedora bugs nailed, and then, more in-depth study into the mechanisms behind human logic and thought processing. Otherwise, you end up with a design that does not quite meet the expectations. And a potentially superb projects gets killed by an evolutionary regression. To be followed.

4 thoughts on “I spy, with my little eye, Gnome Pie”