Why Leclerc? Because Houston sounds American, and Leclerc sounds more French, and Libre is sort of French, ergo title. The reason why we’ve gathered here today is to talk about a very crucial and yet very tricky part of the LibreOffice suite, and that’s its extensions.

Modular, community provided code is every company’s slash organization’s dream. To have a sustained flux of good ideas and high-quality input from its users and fans, to use the collective intelligence and ultimately free pool of resources to better their products. But that’s on paper. In reality, we paint a grim picture.

LibreOffice ships with several extensions in place, the default set. Then, you can install new stuff, and this means hitting the Internet and browsing the official extensions repo. This in itself represents a problem, because you’re not working within the integral set of the program itself.

The official site is quite unremarkable, with some rather badly rendered boxes and text, at least on CentOS 7 running Firefox. Moreover, even more alarmingly, if you filter the results to display only the relevant items for the latest version of LibreOffice, you get nothing. In other words, whatever I’m going to show you today classified as unsupported wing-it stuff. 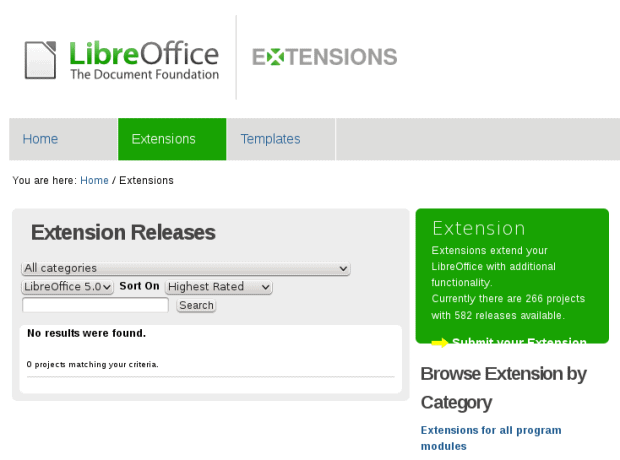 If you expand for all versions, then the total sum of available items counts in hundreds, with less than 100 upvotes for each of the most popular items. This, in contrast to say Firefox add-ons, some of which have tens of thousands of reviews. Another negative aspect of this first impression is that you may think LibreOffice is a hobbyist project with literally no engagement from the community. After all, you’d expect something used by millions to have more than say 64 upvotes or such. 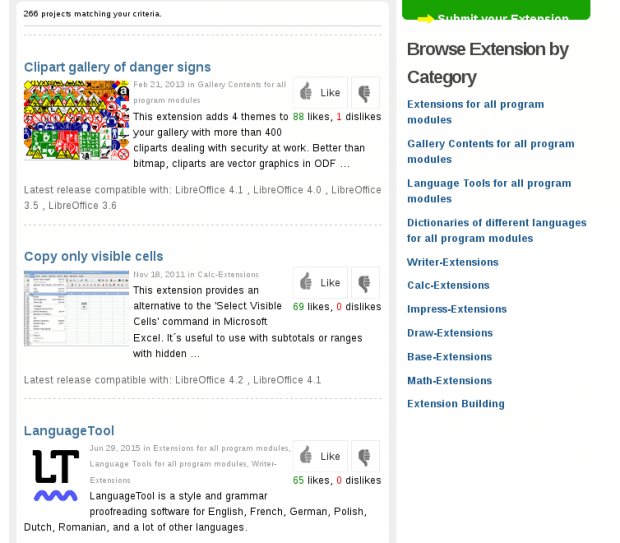 Things are only getting worse the more time you spend searching for content. Many, if not all of the available extensions have a warning message that they have not been maintained in more than a year, and are probably obsolete or abandoned. Some date back to 2011 or earlier. Very few are being actively developed for the latest 4.X branch. 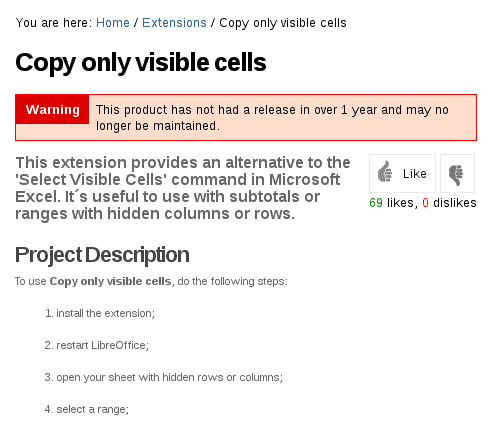 Using this extension could make your hamster go bald.

In the end, I clicked yes

I decided to test, anyway. Much like the Mint experiment from a few days ago, it’s about braving the rules of the game. With Rafaela, I was reluctant to break the desktop environment, but I had fewer qualms with the office suite. Surprisingly, even some of the outdated items installed without any problems. Others did throw some ambiguous popups, and there were a few Java exceptions.

After restarting the program, it was time to start exploring. Indeed, I could see new toolbars in the interface. My set included several extensions with a clearly scientific approach, for equations and chemical formulae, plus the multi-save feature, clipart, and a new, improved language tool. 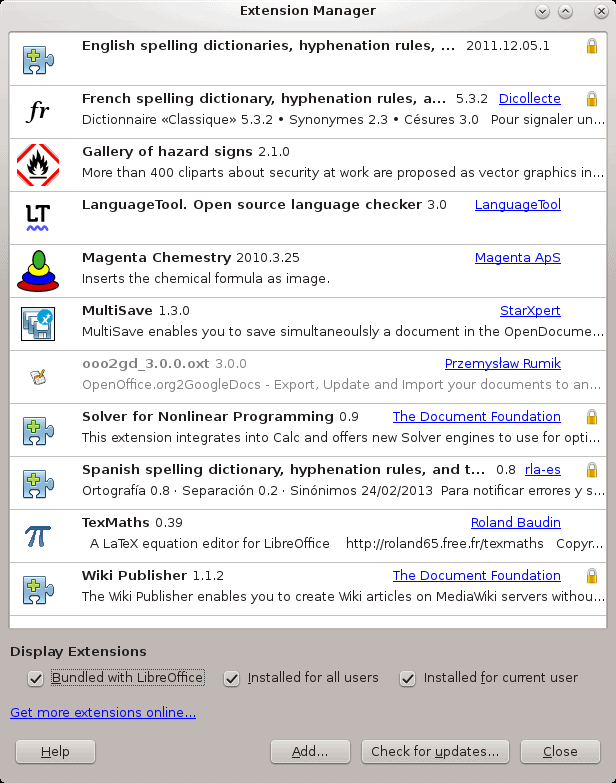 Currently installed extensions, including some of the new, experimental stuff.

I started on the wrong foot with the equation editor. It was asking for LaTeX, and since it wasn’t installed, the little extension didn’t do much. It did not complain or throw any errors, it just refused to do any meaningful work. 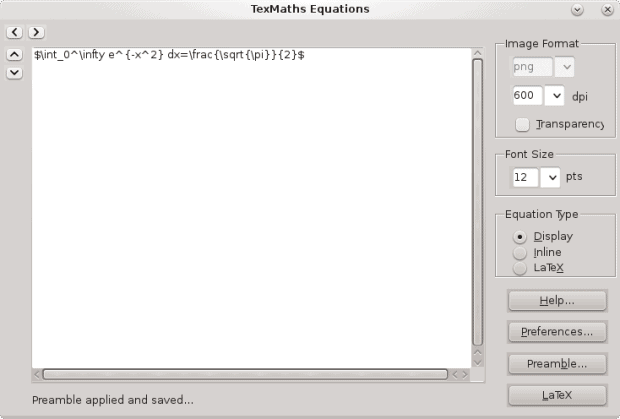 I had more luck with the chemistry utility, and after some rigorous number crunching, it was displaying some medium-quality GIF images that represented various molecules. Nice overall. 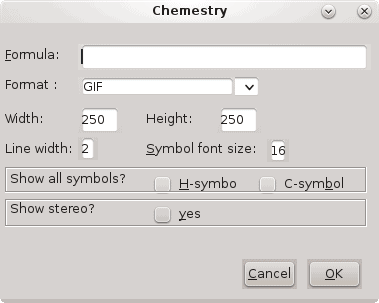 Do you know any fancy molecules? 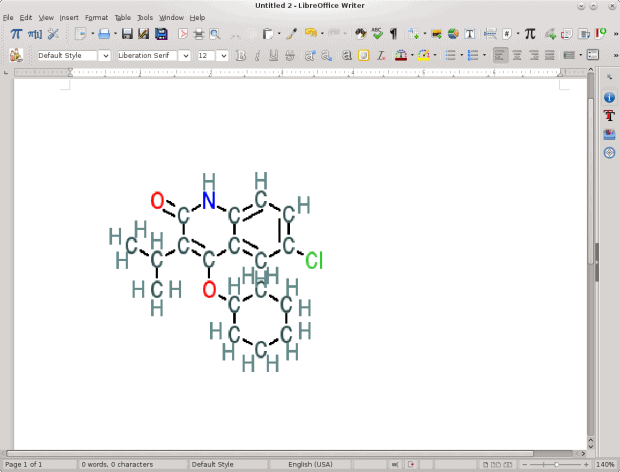 She blinded me with science!

The multi-save function didn’t really work. No files were saved or exported. While the original intent is nice, it’s clearly outdated, especially since the tool still reads OpenOffice. Clipart works just fine, and without any problems. Last but not the least, the Language Tool offers a lot of functionality, but it did not find anything useful in the text I provided. I could not find any difference compared to the standard, built-in spellchecker. 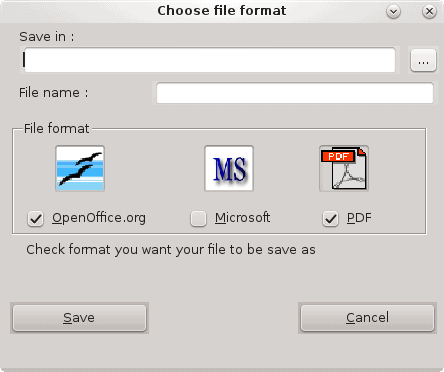 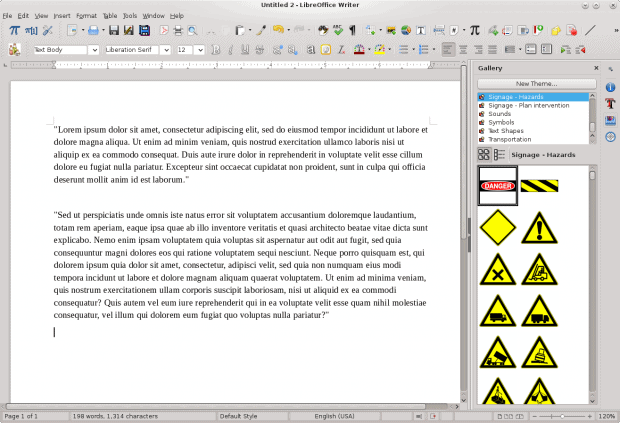 This one works fine. 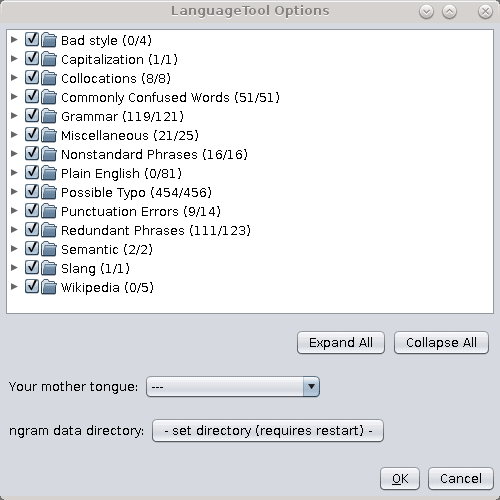 Words, don’t come easy to me.

After about two hours of fiddling with the extensions, a pattern was starting to emerge. One, they were more or less all working despite version incompatibility and age. Two, they were all displaying their individual layout and style with little regard to common practices or how the UI should look. Three, the quality and consistency of results were dubious. Four, the overall added value of these extra tools was virtually nil.

Yes, they did add a bit, but then, you can achieve pretty much the same results by using your own images and the built-in programs included in the office suite. There’s no reason jeopardize LibreOffice’s stability by adding untested, outdated code. But that’s not my question, of course, as none of these sentence have a question mark.

What I wanted to ask is, why does LibreOffice have extensions in the first place?

I understand the motivation. However, if the stated purpose of extensions has not been met, then there’s no reason for these extensions to exist. Libreoffice is a very solid, complete, self-contained product. It does not really need any extra functionality. The existing extensions deter from its quality and erode its brand as a professional rival to Microsoft Office.

On the other hand, if extensions are essential to the ecosystem and community engagement, then the direction of how they are added, handled, verified, tested, and ratified for use needs to be changed. Yes, strict rules can stifle and slow down innovation, but in the current state, even without any restrictions, there’s very little of it. Instead, chaos and randomness rule, and they do not help in creating a cohesive, united front of vibrant development.

LibreOffice extensions need to reflect the parent product. And this means they need to follow the release schedule, they need to be written to the same standard like the office suite, and they need to offer the extra capabilities that a) do not exist b) are really sought after by the users. Killer apps, some might want to call them.

Alternatively, LibreOffice could assimilate all the developers into the Borg collective, and they could work on developing native functionality. This would make LibreOffice even more successful, although frankly, it looks like LibreOffice doesn’t really need any extensions. It does a remarkably good job on its own, and that’s a sure sign of progress. After all, most of the time, extensions are there to fill in the gap left in the original product, deliberately or by accident. Having the framework in place is always a good idea, but if it’s left unused, collecting dust, then someone’s probably done a good job in the first place.

LibreOffice is one of the top free, open-source projects out there. It’s a great example of remarkable international cooperation and innovation. Alongside Firefox, VLC and a few other tools, it’s a top list item for when setting up a Linux distro, or even your Windows box. As such, all its bits and pieces need to shine. It has to radiate a spotless image, and everything must be tightly bolted down, waxed, polished, and shiny.

Its extensions set has a long way to go. Or a very short one, depending how you look at it. However, the current limbo is unacceptable. It does no one any good. While extensions do work, it’s a second-hand effort, far from spotlight, and there’s been little to no engagement in this area. Outdated, buggy, inconsistent content, weak functionality, problems, errors. Not the kind of thing you want associated with LibreOffice. Which is why this is a polite call to arms. LibreOffice will be only be as successful as its weakest link. So let’s make sure that everything works. On the trouble-of-today agenda: extensions. See you around.

3 thoughts on “LibreOffice extensions – Leclerc, we have a problem”