KWave has been developed since 1998, yet few have heard of it. I only recently heard of it myself from  writer and podcaster Marcel Gagné while I was setting up to do how-to-videos. Part of the reason for its obscurity might be that, despite its name, it only recently become an official KDE project in the last release. However, the major reason for its obscurity is probably that it has been overshadowed by the better-known Audacity — which is a pity, because in most ways, KWave is every bit as useful as an audio editor.

Why would anyone want an Audacity substitute? For one thing, while Audacity is cross-platform, it is not well-integrated into Linux. Audacity handles its own resources, as you can tell by its lengthy load time. Often, Audacity frequently gives confusing options for input and playback sources, giving several names to the same device and offering irrelevant front and back options for mono devices, so that users can only find the one they need through trial and error. Sometimes, the necessary option for a particular source can change for no apparent each time Audacity starts.

Moreover, Audacity only supports PulseAudio, the main sound system on modern distributions, through a complicated workaround. Instead, it shows only ALSA as a choice on its toolbar, which many users believe is the only choice.

By contrast, KWave is designed for KDE’s Plasma 5, relying on system resources rather than its own. That means that it loads in about half the time of Audacity, although it takes about the same amount of time to open a file. In addition, running natively means that KWave lists input and output devices under the names that are used by the rest of the system, making them much easier to identify, and does not shift the available choices when restarted.

Still another  issue of Audacity’s self-containment is that it opens new files in its own format. To save a file in a common video format, a file has to be deliberately exported. This problem does not exist in KWave, because it works directly with common audio formats, including .wav, .flac, ,mp3, and .ogg. True, Audacity supports more file formats, but KWave does support enough common formats that sharing files should not be a problem.

In these ways, Audacity has a flakiness that can cause problems during routine work, and can freeze for no obvious reason. In comparison, KWave is more straightforward and, in my experience, more stable.

Kwave is an audio editor that runs natively in KDE Plasma.

Both applications display audio files in tracks and have similar editing features, including drop and drag selection, and the ability to select portions of tracks before and after the cursor position. These similarities probably reflect the fact that Audacity and KWave have similar purposes, although perhaps KWave deliberately borrows from Audacity for compatibility and ease of use, just as LibreOffice borrows from Microsoft Office.

The main difference between Audacity and KWave is their work-flow. The two applications place features in different positions in the menu, and actions that are automatically offered by one must be deliberately selected in the other.

For example, Audacity opens a file using the settings it used last. Any changes in the setting must be made before beginning to work. However, like many applications for KDE, KWave opens with a dialog window in which the new files’ format, length and file size can be set. In some cases, users might want to click through, but the dialog window is a reminder to adjust the settings — which can either be a nuisance or important if a microphone, for example, has a limited range of settings, such as being limited to a resolution if 8 or 16 bits. 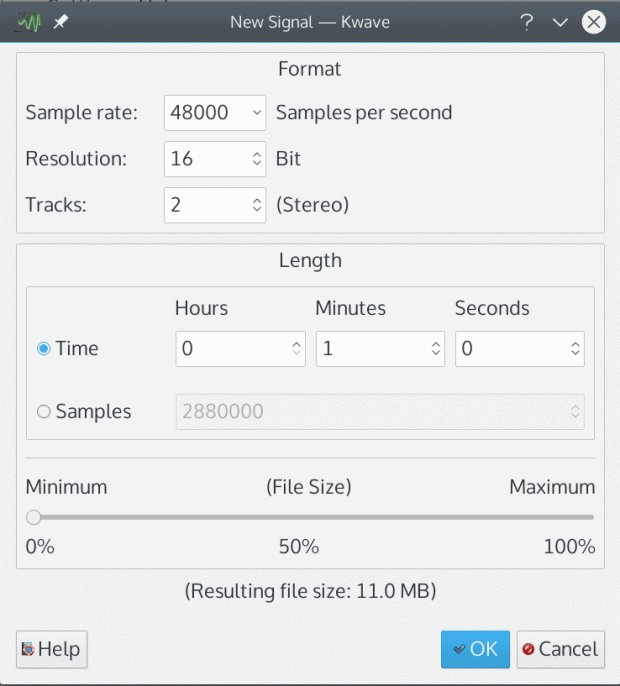 Another example is the preparation for recording. If the same microphone is always being used, recording in Audacity only requires users to click the record button in the tool bar. By contrast, clicking the record button in KWave opens the Record dialog. The dialog contains useful features like setting a sound level at which recording begins, but in many cases, users may only want to click the Done button. Even then, they need to click Record | Start Now! to begin the actual recording. Like the new file dialog, the one for recording can either be a nuisance or a useful presentation of the options that users might want to adjust. 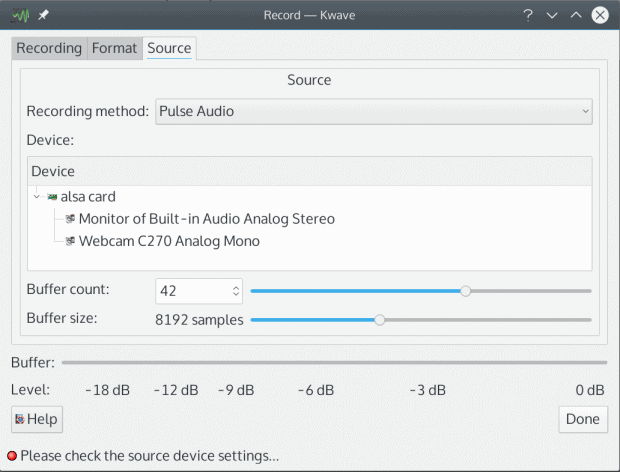 Before you can record in KWave, you have to pass through the Record dialog window.

Yet another difference in work-flow comes when users save a file. In Audacity, a file is saved as a project file, in Audacity’s own format. If you want to output to a common audio format, the menu item you want is usually File | Export Audio or else File | Export Selected Audio, which saves the section highlighted on the tracks. Making either selection opens a file saving dialog, which is followed by a second dialog for adding tags to the file — a feature that allows the selection of tracks by such criteria as artists, title, genre, or year on a music player. Although you can also add tags in Audacity from File | Edit Metadata, the reminder while saving is useful, all the more so since Audacity retains the tags from the last saved file, so that if tracks are being created from one continuous file, you may need to change only a couple of tags, such as the title and track number. The tag dialog displays with each save. 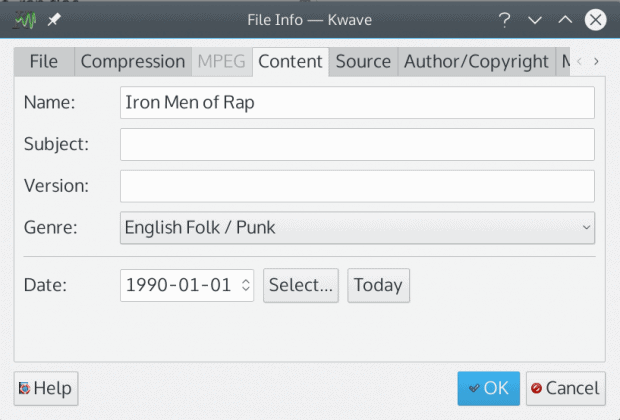 KWave offers much the same features while saving a file. However, the file saving and tag dialogs are combined, and the file saving options divided into three tabs and the tag options into four tabs. Nor are tags remembered from save to save. And if you want to edit tags and save features before saving, the menu item you want is Edit | File Properties.

I suspect that which work-flow you prefer depends mainly on the one with which you are most familiar. For myself, I prefer KWave’s cautious approach to new files and recording, and Audacity’s to adding tags. Dividing the tags into tabs makes missing some easier, and, although KWave offers more tags, many, such as copyright, license, engineers or technicians are only likely to appeal to hardcore audiophiles. Still, the point is that all the basic features most users expect are available in both. The main difference is where and when you access them.

Limitations and an Annoyance

KWave also features a useful array of settings. While settings sometimes require a careful search in Audacity, KWave places them all in the setting menus. Among the settings are the choice of whether to display new files in tabs or windows, the sound architecture for playback, and the ability to re-enable “Do Not Ask Again” windows. The only setting that I miss is enough theming to change the monochrome track display and the garish default yellow and blue used in selections.

Users more advanced than I am may miss some of Audacity’s Effects, which number more than twice as many as the ones listed in KWave’s Fx menu. Then again, maybe not, considering that many commonly used effects, such as Fade In and Fade Out are available in KWave. KWave also lacks the tools of Audacity’s Analyze menu that are useful for fine-tuning files and subtle applications of effects.

All the same, for basic to mid-level audio editing, KWave is more than sufficient. The differences in its work-flow soon become familiar, and most tools are easier to find than in Audacity. Switching to KWave takes very little adjustment, and its relative stability and less cluttered interface are more than enough reasons to consider making it your audio editor of choice.