Six years ago, I reviewed Stellarium for the first time, and I was quite impressed with the program. This educational piece of software is a free, cross-platform planetarium, offering fans of science and the Universe the unique ability to explore the sky without buying expensive equipment or lurking in and around observatories through long, cold, lonely nights.

Six years is infinity in technical terms, and just about the distance in light years to our nearest neighboring star, give or take a few odd trillion km here and there. And so, I’ve decided to review Stellarium once again, and see how it behaves and what it can do. WARP speed, engage!

I installed the program on my G50 laptop with its onboard Intel HD graphics, good enough to render objects at a reasonable 45-50 FPS, without any stutters or delays. Indeed, Stellarium uses OpenGL to create realistic atmosphere, sunrise and sunset, planet and moon motion, and render the Milky Way in a precise, breathtaking detail, and this makes the whole experience even more enjoyable. 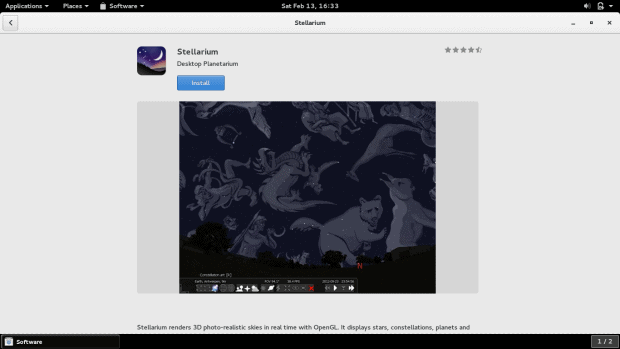 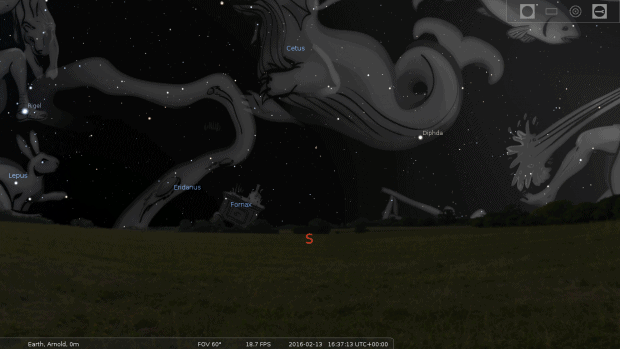 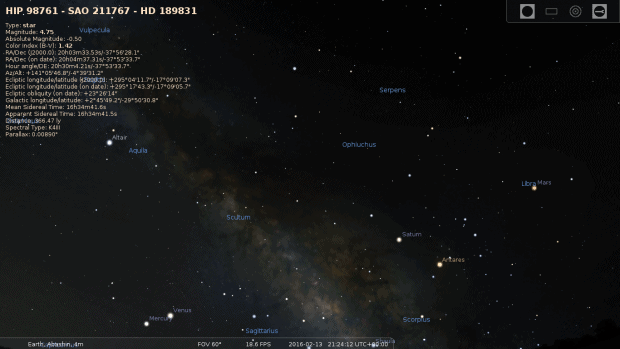 The UI is very simple. There are several buttons left and bottom and to the top right, which you can use to change the software’s viewport. In general, you can add celestial name objects, draw constellations, display accurate information about selected stars and planets, rotate the camera, change the angle, as well as speed up time. 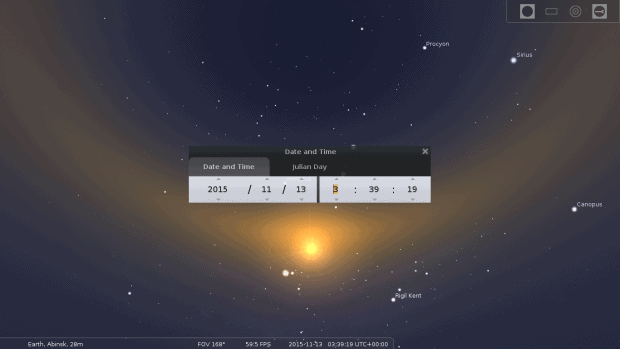 Let’s do the time warp again! 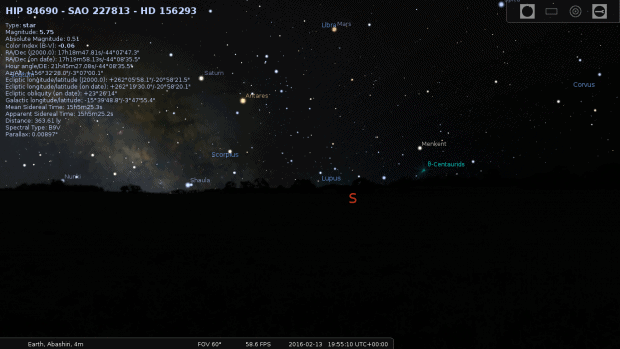 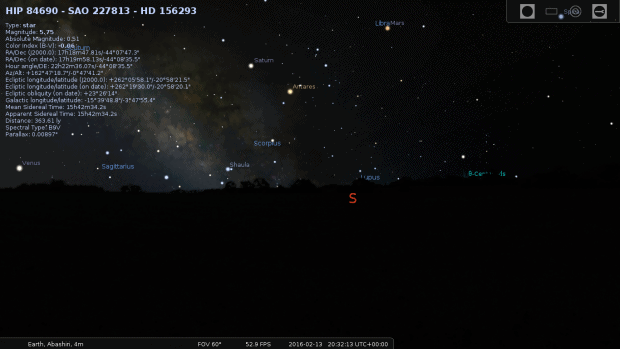 You can also jump locations around the world, and experience the sky from different places, including atmospheric disturbances. Except you have the luxury to do as you feel like, as opposed to scientists who sometimes have to spend months and years in eager anticipation of amazing sightings. 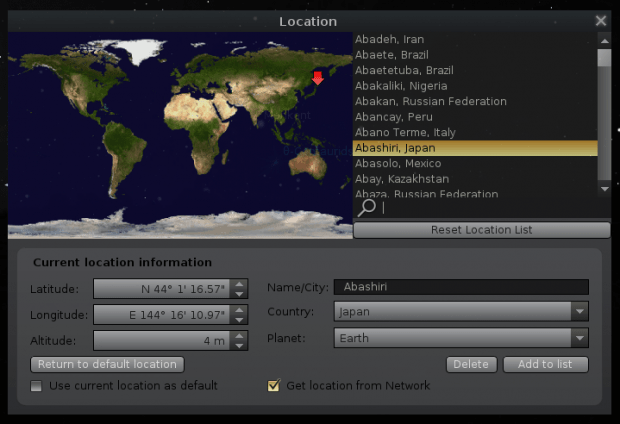 If you’re not interested in just wildly exploring the galaxy, you can pretend you’re using a telescope and explore only a narrow band of the night sky. You can use different telescopes, change lenses, and configure magnification, but overall, don’t expect miraculous quality and detail. It is very difficult to fathom how huge the space really is. As someone who has actually been to a planetarium and seen Jupiter and Saturn using some pretty decent telescopes, I can tell you the feeling is both majestic and underwhelming at the same time. Planets and stars look more like stickers on a dark ceiling than physical objects. And they are so far, far away. Immensely so. 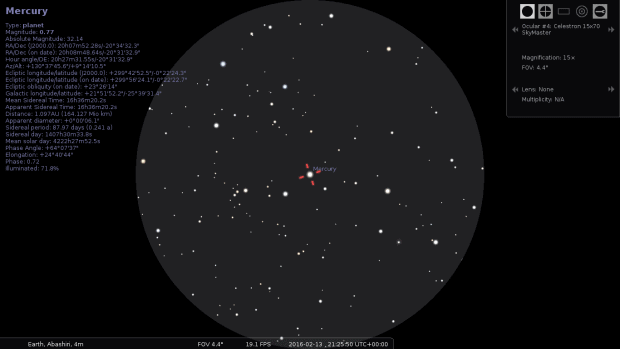 But then, you can also just use the mouse wheel and zoom in. Far, far into the sky. Again, this is a privilege that scientists do not often have. But Stellarium relies on years and years of accurate sky mapping, and you have some 600,000 objects at your disposal, with another 200 million stars available in extra catalogs.

I have to say I was engrossed with this feature, and I spent a while observing our own Solar System, the planets and their satellites, enjoying the cold, brutal scope of it. I know it sounds quaint saying I felt lonely and tiny, but that feeling did transpire, even through the limited medium of a pixelated laptop screen. If there’s a moment when it’s appropriate to listen to Also sprach Zarathustra full volume, it is now. 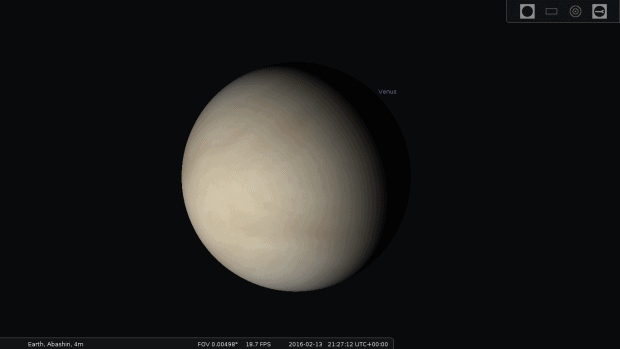 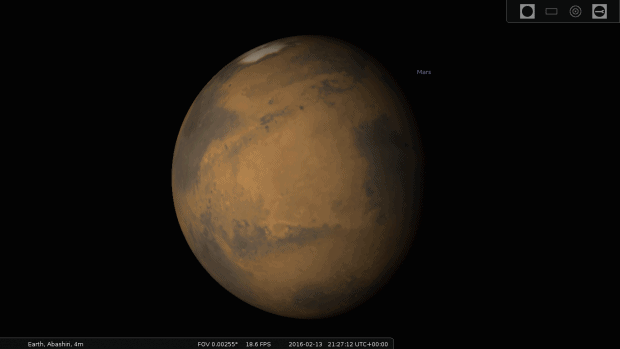 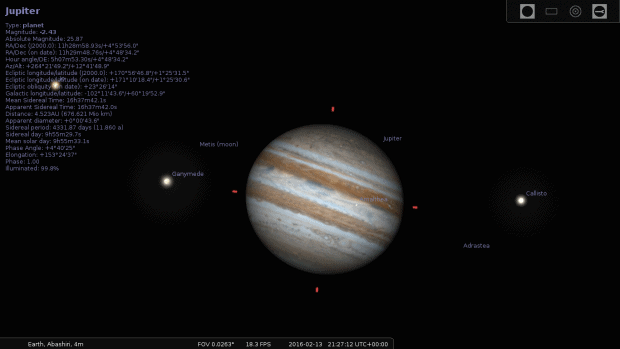 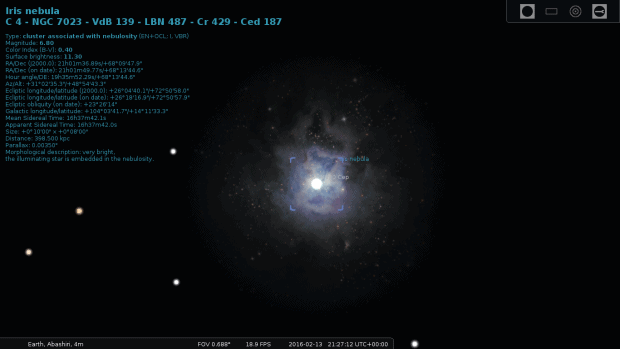 So impossibly far away.

Stellarium is not just for amateurs and space enthusiasts. It can be used for serious things, including demonstrations. The fisheye interface allows the program to be projected onto domes, which makes it ideal for study, or use in planetariums and schools. You can also tweak telescope settings and configure custom locations, but these tasks were a little beyond me at this stage.

Plugins are also quite powerful. You can configure and change how they run and behave, and basically customize your entire Stellarium experience. But it takes time and patience, and your first few attempts will probably just revolve around curiosity and awe, and satisfying that inner Star Trek TNG child in you. Now, if you do happen to hear Picard’s voice telling you make it so, it might be a good moment to pause for the day.

Other stars and planets

You are not limited in your ability to look at the sky from just Earth. You can teleport yourself to other planets and remote star, but while this feature did work for me back in 2009, it did not really work for me in 2016. I’m not sure what I did wrong, but changing the planet left me with the friendly, grassy fish lens view of Earth rather than cold, remote, forbidding rocky landscape from elsewhere in the Solar System. 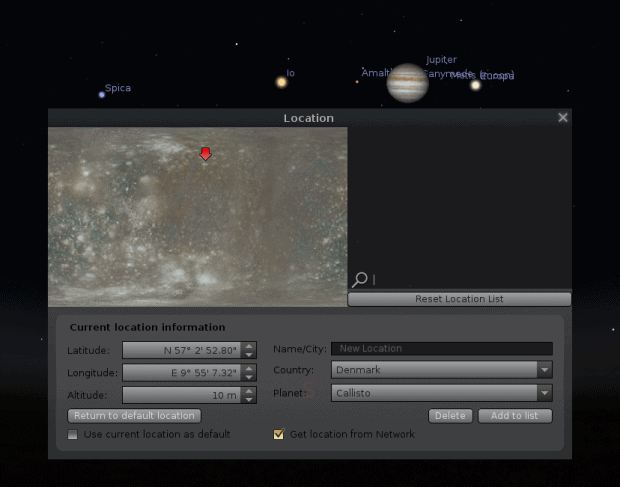 Hopping over to other planets did not quite work for me.

Stellarium has not changed much in the past six and a half years, but then, neither has the sky. In software terms, this is infinity. On the Universe’s scale, this is less than heartbeat. But the program has changed, and I’m quite pleased with the small, incremental improvements. The basic feel of solidity remains, and it’s the little extras that make the experience all the more enjoyable.

Shame about the extraterrestrial trip ‘n’ selfie, but this might be a bug, or I may have not really figured out how to use the feature, but then, I didn’t struggle back then, so I will leave this as an open question to the developers.

All in all, if you have the science pixies coursing through your blood, Stellarium is an awesome day to spend a few hours getting your humility back. And thoroughly enjoy yourself, of course, as there’s a deep satisfying feel of all that great power at the tip of your fingers. In a way, it’s a reflection of how privileged we are that we can explore so much without leaving the safety of our homes. Space, the final frontier.