Krita? GIMP? Darmok and Jelad at Tanagra. So, if you are into any kind of image manipulation, you probably have heard of GIMP, a free would-be (!) alternative to Adobe Photoshop, and in its own right a very reasonable and powerful image manipulation and processing suite, hence its acronymy name. But there’s less of a chance that you have heard of Krita, a digital painting program with secondary focus on image work.

I decided to test Krita, to see what it can offer a semi-casual user, both as a plug-in for GIMP and its own art creation software. To that end, I had it installed in KDE neon with Plasma 5.12.3, the latest edition currently available on the market. And before we begin, do remember that genuine art takes talent, skill and patience, and that’s not achievable in the span of a single review. Let’s roll then.

Getting used to the surroundings

I launched the program and immediately felt assailed by the dark theme used in the program. Not to worry, you can easily change the theme, and there are many available options. Then, I decided to start working without looking up any tutorial or help, just to see how intuitive the things are. And they are. If you’ve used other image-manipulation programs, GIMP in particular, you will feel rather comfortable with Krita. Even the visual layout is similar. Tools on the left, brushes and layers on the right. You start playing, and it works just fine. Effects, transparency, color grading, and whatnot. 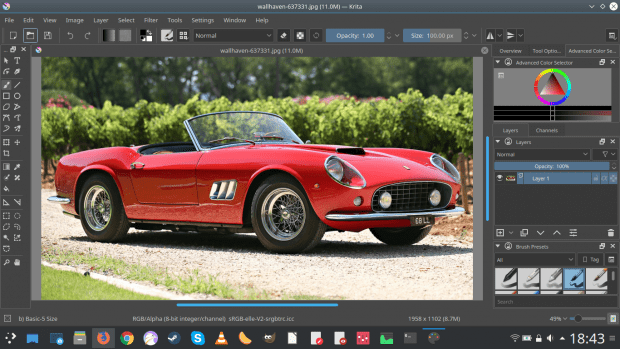 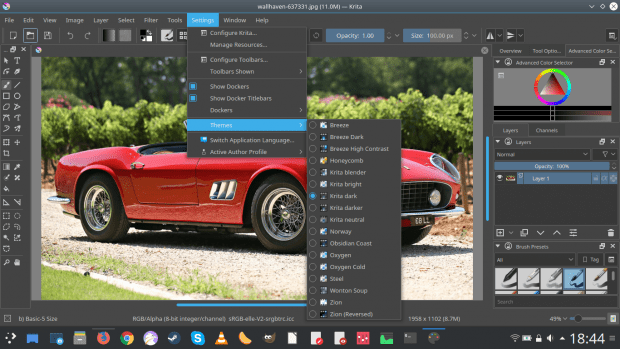 Some of the stuff can be a little intimidating, but again, unless you’re a professional, the defaults are okay. You can open multiple documents and control them using a horizontal tab bar, the same feature that was finally added in GIMP 2.8 and the single-window interface. 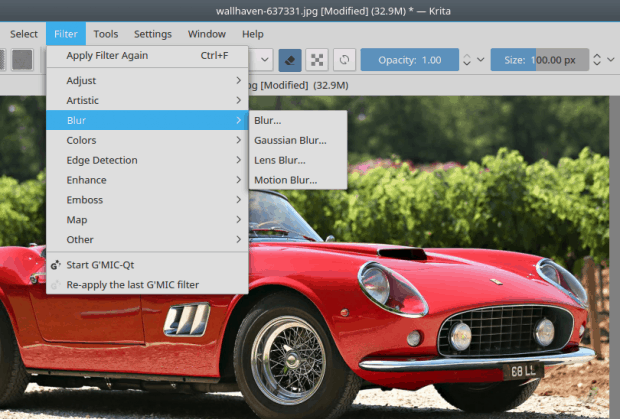 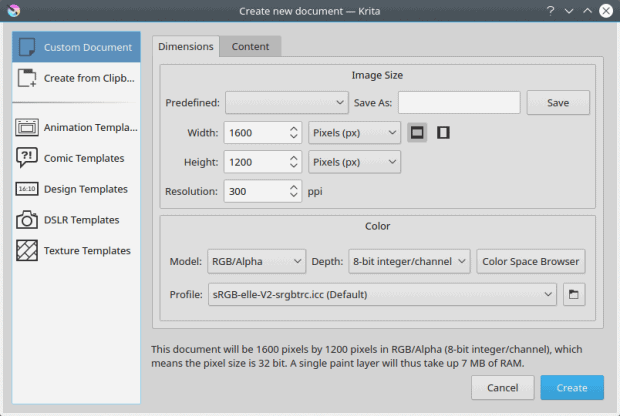 Layer manipulation options are almost identical to GIMP, with the ability to duplicate, merge and flatten layers, convert selections and masks to layers, use layer masks (and they are important indeed), or apply layer modes, like screen, burn, dodge, addition, and others. There are several other features that you don’t see in GIMP. 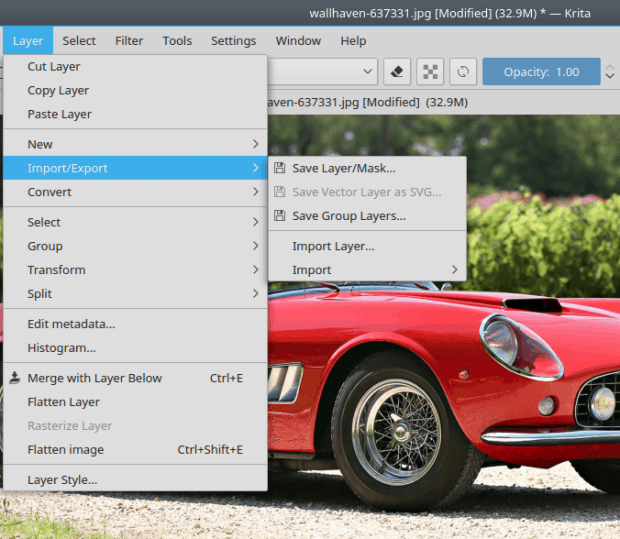 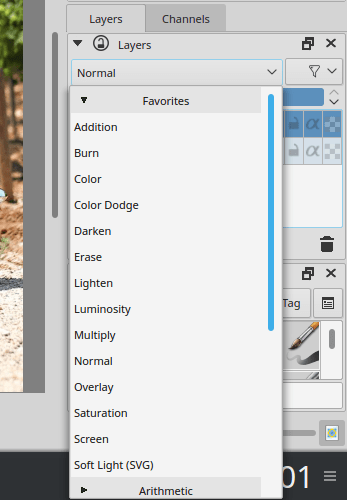 There was a small visual bug with the layer settings once I changed the theme, and it took a full program restart to get everything in order. Notice that the color palette is missing in the first screenshot, but then I got it back, and everything was happy thereafter. 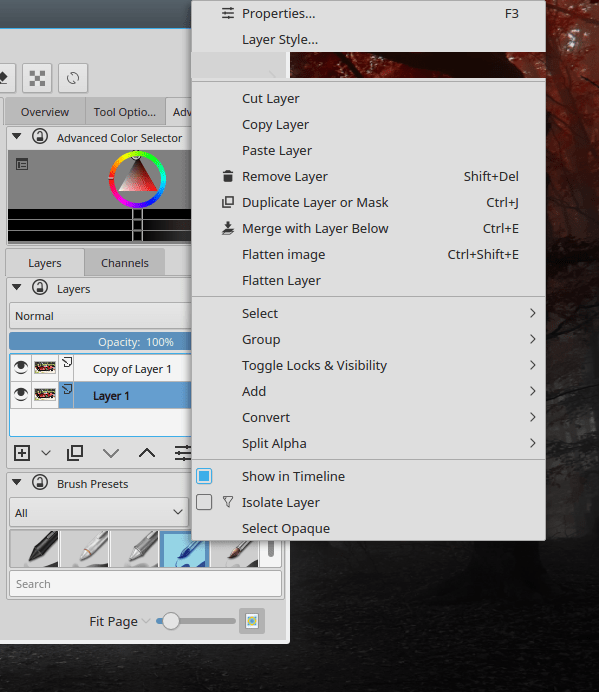 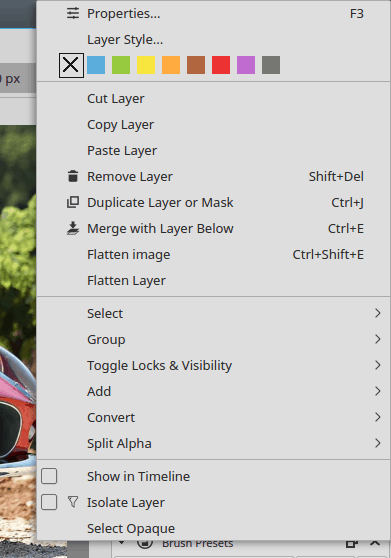 So far, I’ve mostly focused on the IMP size of things, less so on art creation. Now, the second part of Krita’s mission statement comes in several forms. One, all sorts of shapes and brushes, which do allow for some fancy art work. Two, additional bundles (from previous versions of the program) with their own brushes, gradients and palettes. 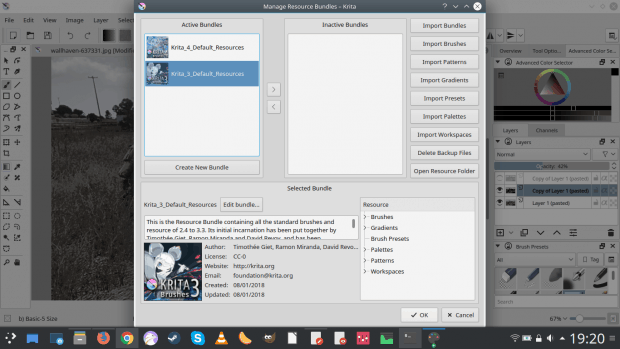 Then, I also played a little with these extras, like for instance the caligraphy brush. Very neat. Now, to be fair, you can create brushes in GIMP also very easily, using even existing images as patterns, and there’s a fairly large and colorful repository of additional art work available, some of which is also accessible through the standard distro repositories (for Linux users). This is less obvious with Krita, maybe because it’s designed to be standalone. 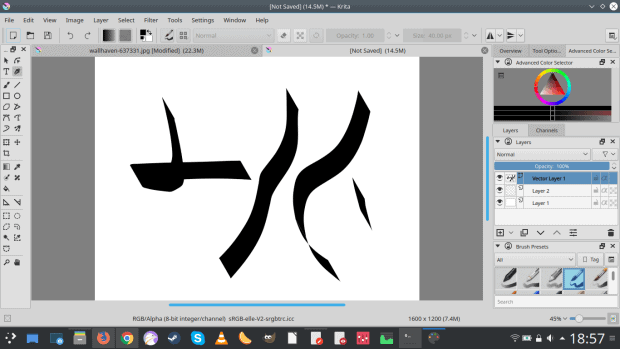 Then, there’s also the GIMC plugin – which is another powerful tool, and you should definitely have it, as it significantly expands the available range of filters and effects you can apply to images. Indeed, GIMP feels nude without it – plus a few other useful extras. I wanted to see how it works in Krita, and got a sad message that gimc-qt plugin was missing. And worse yet, it’s NOT available in the distro repos. You have to manually download and setup the plugin, whereas GIMP has its own version in the standard channels. Why.

I also noticed that several other useful effects – which I believe are part of the standard GIMP offering, like Generic, Artistic, Decor, Distorts, and some more – are missing, and they would definitely make Krita more accessible. I know that the focus is on art creation, but these effects and filters are tiny in essence from the application footprint perspective, and adding them should be trivial.

I was really enthused about the macros. Essentially, you record your actions and then replay them. Makes perfect sense. You do not want to waste time re-doing the same dozen effects on your layer in each different picture, again and again. Well, easier said than done.

I noticed the functionality to be flaky at best. First, when recording, some effects simply didn’t take, eh, effect. The progress percentage remained at either 0% or stuck forever at some random number, but not so with the macros off. Also, the performance of applied effects was also much faster without any macro recording. Then, after recording a macro and saving it, the actual file was not there.

On another occasion, the macro was correctly saved, but when I tried to run it, it didn’t do anything. I opened the macro file in a text editor, and it had an empty and unclosed <RecordedActions/> declaration, and nothing else besides. For some reason, my experiment did not work.

It wasn’t as smooth as I’d hoped. I decided to try to edit a few images – a random wallpaper featuring a classic car, and an in-game screenshot. I wanted to make the latter realistic, which I usually do in GIMP by creating several layers from the original, applying unsharpen mask, video/newspaper effect, grayscale noise, and a bit more. 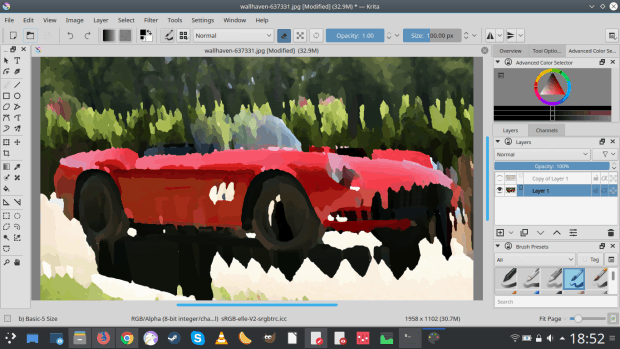 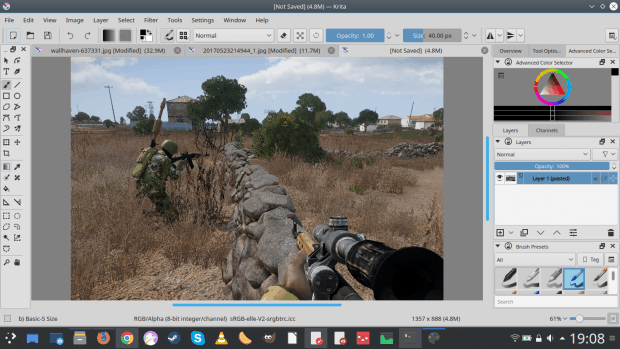 In Krita, this was decidedly more difficult, and not just because of some subtle interface differences. For example, you don’t have the option to control individual color changes when setting up noise, and there’s no resize on selected rectangle area. I also struggled with editing the color balance to make the image look more kind of grayscale and faded. No fancy effects as I mentioned earlier. Sure, for art creation, this is not the main idea, but then, there’s really no technical reason why Krita ought not to have these little extras. 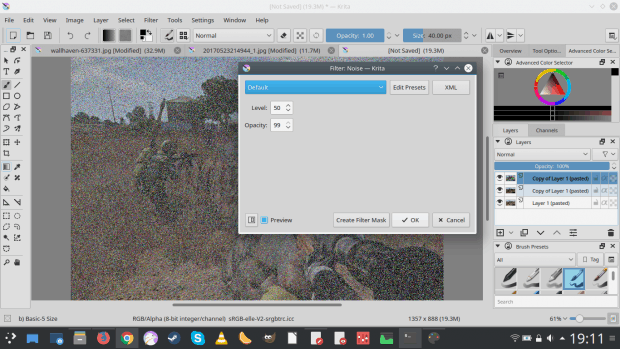 The preview functionality for applied effects did not work consistently for me – often, the preview would actually flicker, so you only see it “applied” for about one second and then nothing. This is frustrating, as you’re not sure what you’re going to get. Other times, it worked perfectly. Go figure. 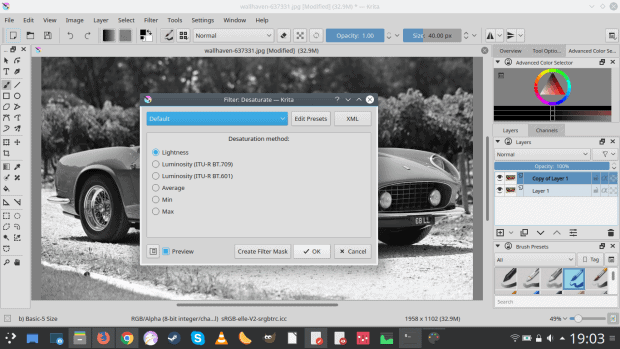 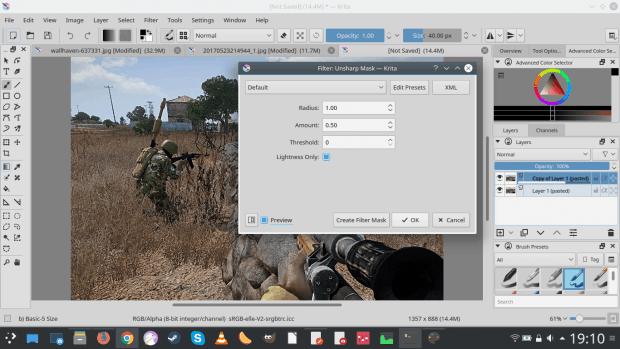 In the end, instead of having a decent faux-realistic game screenshot, it looked more like a cheesy poster with the DOS color scheme, and I’m not saying this to disparage Krita. I tried to do the same thing I do in GIMP, and here, I failed to achieve the desired results. 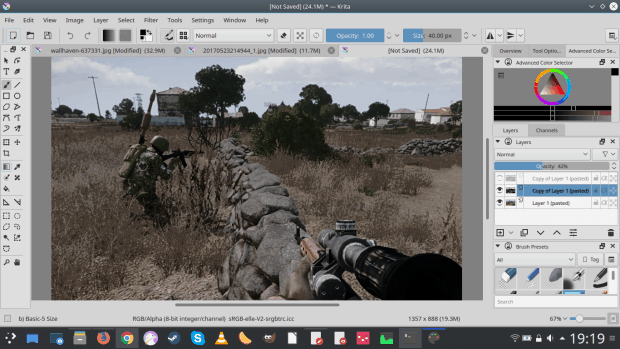 What about actual art?

Well, this is a long-term project, so we will see. But then, there’s the cartoon speech bubble test. This is impossibly difficult to do in GIMP. You need a lot of patience and non-intuitive effort to create a simple balloon and then add the little arrow pointing at the (comic strip) character, to indicate it is speaking. I didn’t find Krita any easier in this regard. You still need to free-draw lines and bend them, and then cut your wrists, because this tasks saps life.

Again, like GIMP, you have an almost infinite range of possibilities when it comes to the layout of the main interface. You can dock, undock and float a bewildering range of tools, and this is best done on a huge monitor with lots of pixels to let Krita spread its wings. 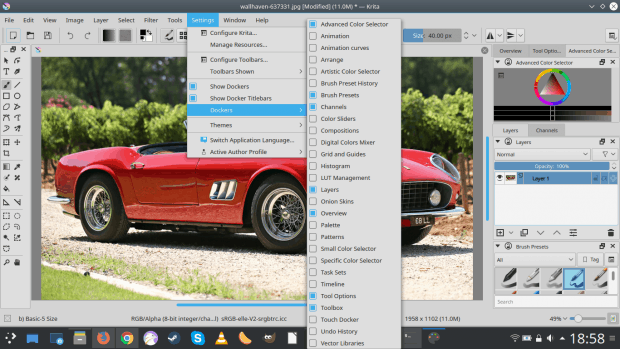 My first encounter with Krita has been interesting so far. On one hand, without any tutorial and only my prior knowledge of GIMP, I was able to do about 80% of the stuff that I wanted, and that’s pretty good. Add to that some extra features that GIMP does not have, and you have yourself a reasonable IMP.

But then, on the other hand, there were a lot of frustrations – and that’s even before I got a chance to sit down for a few hours and paint. Macros didn’t work as well as they should, GIMC is missing, and some of the effects and options are clunky. Maybe all of it comes down to habit, but I doubt it. I have a fairly good natural affinity toward software, and if it’s not intuitive, it means it’s not designed right. Krita has some decent features, but then it also has some (let’s call them GIMP-like) quirks that simply make no sense from the workflow perspective. The UI show work with you, not against you.

All in all, Krita is better than what I’d expected. Things also become slightly more complicated when you take into account Karbon, which is another KDE application and part of the Calligra suite, but it also does vector graphics, and perhaps competes or complements Krita. The duality between GIMP and Krita is also intriguing, but also an indication of forking and wasted energy, because there’s 70% common base in both programs that could have been invested making dope effects, like, I don’t know, a comic strip speech bubble, rather than replicating what’s already there. In a way.

Bottom line, I like Krita, and I will explore it some more, trying to master its interface and options, and perhaps even render some original art without shouting at the computer. For me, GIMP is a no-go in this regard, so this will be an interesting comparison experiment. Lastly, I’d like to see more effects, GIMC seamlessly integrated, and the macros must work. Well, there you go. Take care.