You must test this new dock for KDE/Plasma, my friends told me the other day. I’m kidding. I do not have any friends. But I did get to see more and more references to Latte Dock recently, and not just beverage at the local coffee shop, so it got me thinking. Is this program as good as they say? Or just good? Or?

‘Tis a curious question, because among the many varied desktop environments out there, Plasma comes with a solid, traditional bottom-panel-plus-menu recipe, which has remained unchanged throughout the KDE history since ever. Windows still uses this formula, twenty plus years and counting. A few other desktops, as well. So is there really a place for a dock in the Plasma world?

I ventured about getting the latest and greatest for this test. First, KDE neon as a live image, so we get the best Plasma can offer. Then, I downloaded Latte 0.6.0 from Github, as it comes with a few improvements and bug fixes that aren’t available in the repos. I also wanted to see how simple it is to compile and install this program from sources.

Well, it was okay. You sure do need a whole bunch of dependencies. If you do not install them, you will struggle with various cmake compilation errors, hunting around the Web for half-answers. Instead, just get the right packages installed first. For Ubuntu, i.e. neon, the list reads as follows:

Once this step was complete, the install script completed without problems, and I could start playing with Latte. Shall we begin?

By default, Latte will open centered, at the bottom of your screen, which means it will obscure the panel. Therefore, while testing, you may want to consider auto-hiding the panel, or moving Latte to either the left or right corner of the screen, or both. However, to see how well it works with the default options, I left it where it was for the time being.

You do need to add icons to the dock – this can be done by dragging them from the system application menu, otherwise, when you close them, they will disappear from Latte. However, once added, they are persistent. There’s no correlation between whatever you may have added to the panel at the bottom, or pinned to the taskbar, and what Latte does. It’s a fresh new configuration from scratch.

The settings menu can be accessed via right-click anywhere on the dock, and you have a popup window, with four categories. You can tweak behavior, appearance, tasks, and … tweaks. The first category defines placement and visibility. More about this later. The second one lets you define the vertical size of the dock, the spacing between icons, hover action, and such. Tasks is similar, but it expands the hover and zoom actions with appearance, interaction and filters. Basically, you can define whether you have full-window previews or small thumbnails of active applications, whether to see applications from your current screen or the entire space (for multi-screen setups), glow, indicators, and other settings. The last category allows you to define additional appearance and behavior traits. 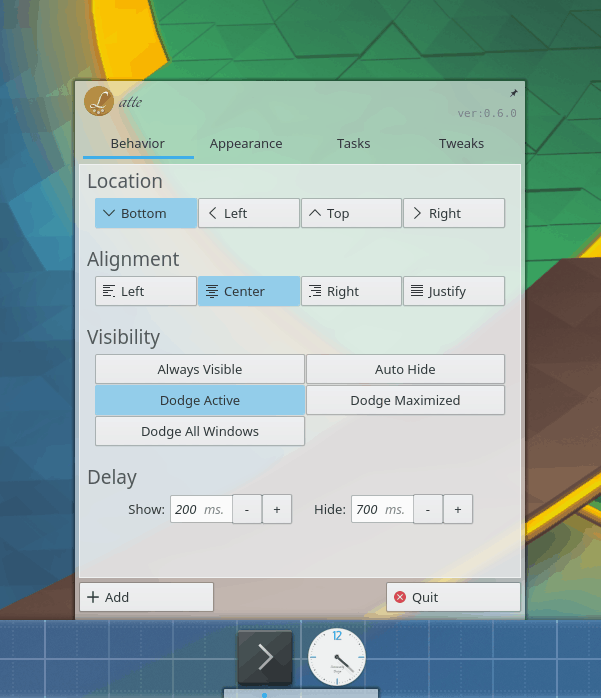 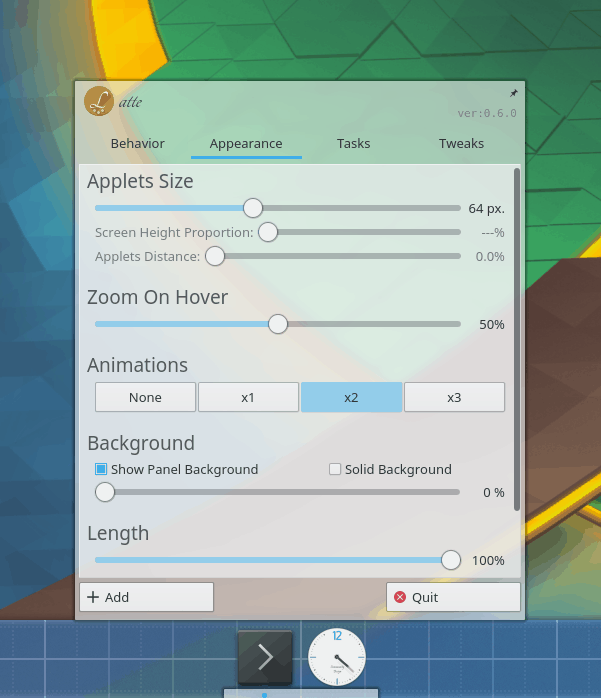 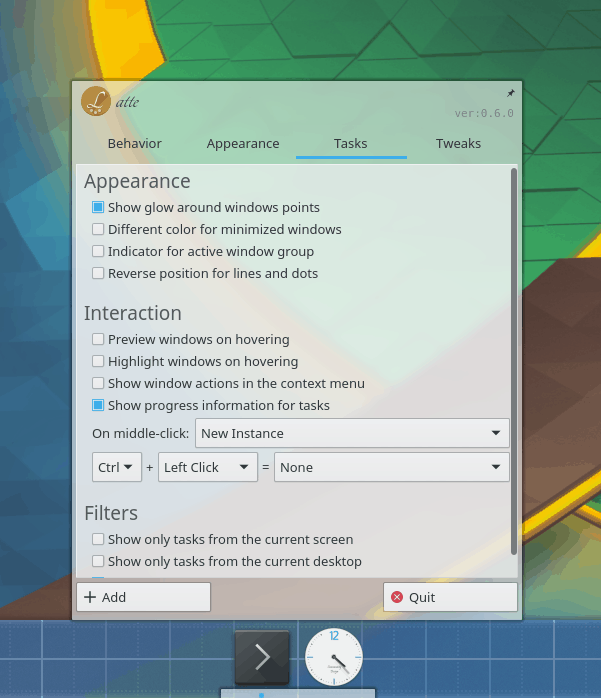 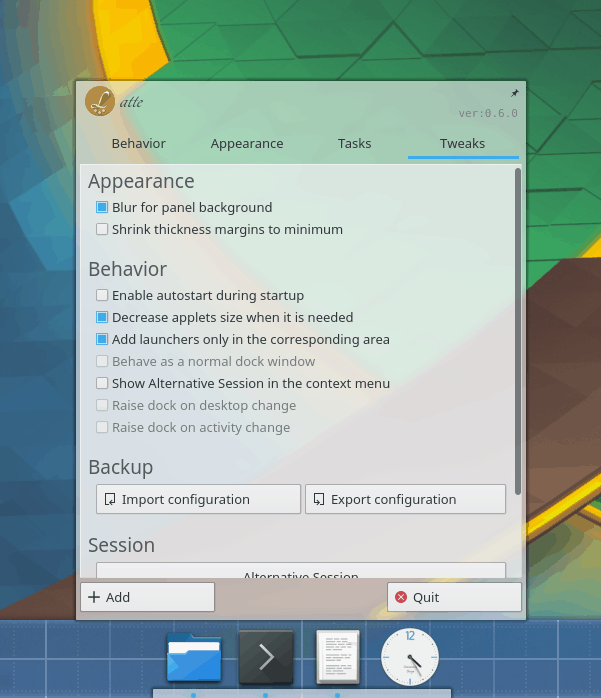 I spent a little while playing with Latte, and the overall experience was decent. Once configured, the dock behaves as expected, and it lets you have a separate, other-than-panel application launcher. Latte respects different icons themes, and it does offer (for some applications) a rich, contextual right-click menu, similar to Ubuntu. You can thus use one of the application functions directly from Latte, without having to launch the program first and then dig into the options. 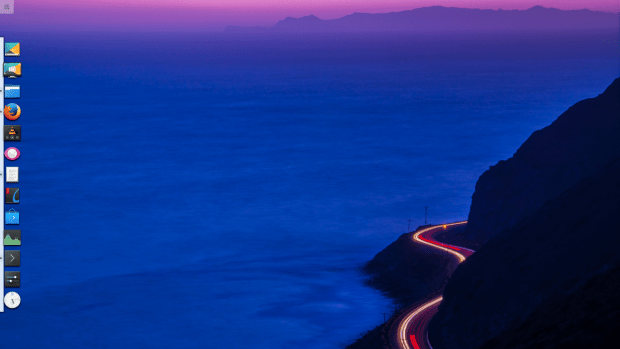 Oppa Borat style. Now, let’s discuss the less bright sides of this little app. First, it was slow. The animations were visibly laggy, and I had to disable them completely to enjoy some semblance of speed in interaction, which is quite important for desktop use. However, this did not yield 100% satisfactory results, as a perception of goo remains. Shuffling icons is a tedious process, for example. You’re not quite sure if you’re going to place them right, and sometimes there’s a full-second lag before you see where your icon is going to land. Even then, it looks like it’s brutally, forcibly displacing an existing one, rather than making it move.

In comparison, Unity Launcher in Ubuntu or perhaps the Dash to Dock extension panel in Gnome 3 respond much faster, with an elegant, fluid motion of icons, allowing for a more pleasant experience sorting out the aesthetic side of things. They are also more easily customizable in terms of placement.

Speaking of rival software – and I’m deliberately not going into a full-blown dock discussion, we’ve already talked about that, they also have a simpler, more logical configuration flow. Latte has four categories, but in essence, there are just two major tweak types – look and behavior. They are probably grouped the way they are because additional tweaks were added over time, enhancing the initial dock implementation, but now they make less sense from the UI perspective.

On the aesthetics front, there were a lot of woes, mostly small ones, niggles really, but we cannot ignore them. In the bottom placement, if always visible, the dock appropriates a fairly decent chunk of the vertical screen equity. If you place it sideways, similar to Unity Launcher, it may at first obscure the bottom panel, which can be tricky. You need to carefully decide what kind of visibility you want, in addition to orientation. 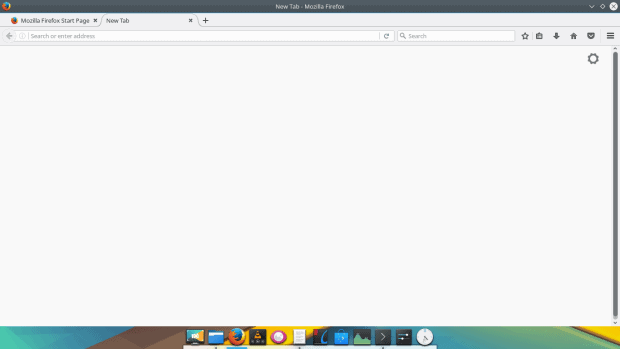 Problem 1: When using horizontal placement, a big chunk of screen equity is appropriated by the dock; no different than a panel, but then, this dock is meant to be better than a panel, right? 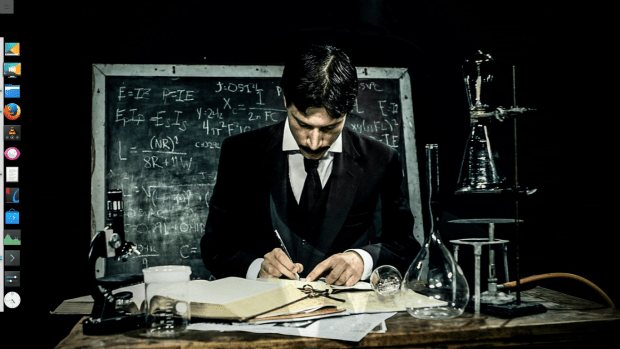 Moving the dock to a vertical placement helps, but there are other problems with this workaround. 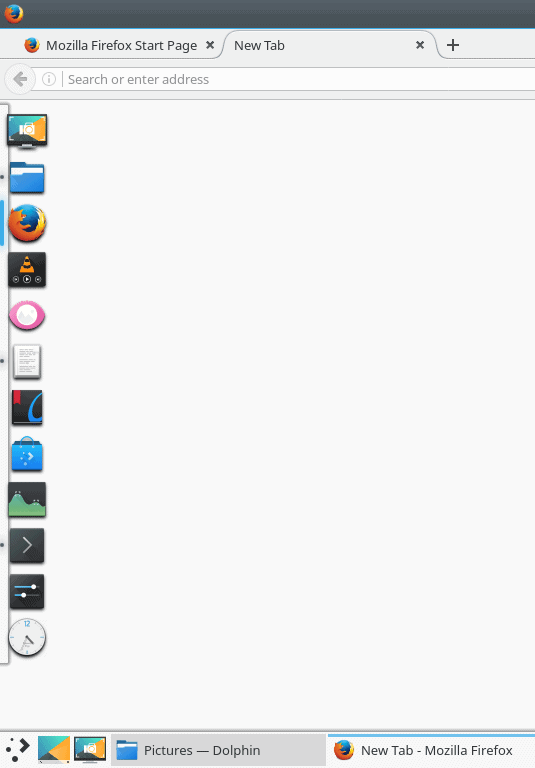 You need to carefully choose the visibility setting. 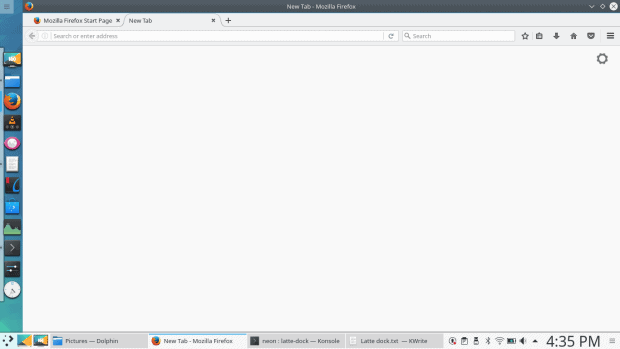 Regardless of how you do it, I still had issues with icon sizes, icon overlap and shadows. Some icons were bulging below (or over) the dock border stripe, but they also did it in a rather inconsistent way. At first I thought it had to do with windows being minimized or maximized, or maybe the activity inside them, but no. It seems purely arbitrary. This also applies to the overlap.

Problem 2: Hover information touches the Spectacle icon; since Breeze icons have irregular sizes, depending on what programs you have arranged in your Latte Dock, this can create a rather rough effect. 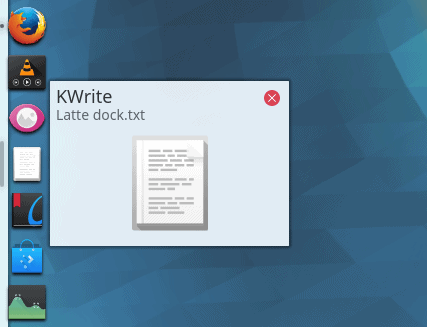 Problem 2a: In vertical placement, some open applications do have a preview, while others do not; when using a horizontal placement, this problem does not occur.

Problem 3: Observe the Steam icon, it’s protruding to the left for some odd reason; at different times, Firefox, Konsole and other icons would do the same, but then, they would not; perhaps there’s a pattern, but I have not found it, and it’s driving me crazy.

Lastly, there’s the matter of consistency. Latte does not feel like a pure Plasma product. Yes, it looks the part, and yes, it works well, but it doesn’t have that inherent KDE-ness about it. To begin with, it should have been called KLatte or something. But then, it’s quite vivid and 3D. Breeze is very flat, very monochrome. These two clash.

Why? Yes, Latte Dock works well, but what is the higher purpose of a dock in KDE? After all, the bottom panel has it all – menu icon, shortcuts (if you want them), taskbar with active windows and/or pinned applications (if you want them), and a shrinkable, highly flexible system area. You can also add new panels, and sprinkle them with whatever you like, including widgets. 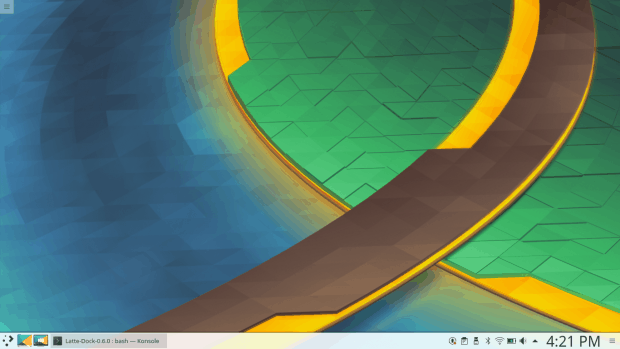 Proven desktop formula; all the ingredients are there, in a single bar.

Latte (or any dock for that matter) allow for a subset of this functionality, at this point. While the dock was nice and elegant, and forgiving some of its speed bumps and visual glitches, it only offered shortcuts and taskbar functionality in one combined view. No menu and no system icons, which means that I did have to use the panel after all, to control volume, Wi-Fi, eject volumes, and whatever. So a replacement it is not. A supplement then? If so, in that case, the added value margin is very very thin, because docks are nothing more than slightly livelier and possibly more beautiful panels.

Calling Latte Dock a replacement for traditional panels in Plasma is like calling scooters a replacement for the car. Each has its own merits, and by such it shalt be judged. Specifically, Latte Dock comes with a lot of interesting features, plus a slew of bugs, which are expected for something in the sub-1.0 version era. Luckily, there do not seem to be any cardinal problem. Aesthetic, intuitive, no deal breakers.

No deal sweeteners either. That is THE problem. Overall, Latte works, but it does not have any real advantage over the classic panel, or even other dock solutions out there. Not enough to oust the old guard. After all, there’s a reason why the menu + bar formula has been around for so long. It’s simple and it works. Latte needs an extra shot of awesome if it wants to succeed. To be followed and re-tested.

6 thoughts on “Latte Dock – An anchor for your Plasma stuff?”