I have to admit, I wasn’t too pleased with my experience with Ubuntu MATE 18.04 so far. I mean, it was all right and all that, but there were too many bugs, too many problems, and even a few application crashes, which are a big no-no for an LTS release. But at the same time, I was quite intrigued by all the features and options that MATE offers. And this is why we’re here.

I want to explore the innovative side of things in the reincarnated Gnome 2 desktop. We touched on some of these things in my MATE 1.20 review, and then in more detail in my article on Mutiny, a Unity-like desktop layout for MATE users, designed to fill in the gap left by the unfortunate demise of Ubuntu’s flagship environment. But that’s only the tip of the iceberg. So with the dichotomy of dissatisfaction and amazement, let’s see what this old-new desktop can do for us.

We start nice and slow like. Back in the day, before software development was all about agile and such, there was more focus on creating complete products. And the Control Center in Gnome 2 – now MATE – was (is) such a product. It’s a one-stop tools & utilities shop, allowing the user to quickly and easily access all and every system maintenance and customization function, with an intuitive interface and clearly legible categories. The looks are less fancy than what you get in various desktop environments, but the functionality is top-notch. While there’s nothing wrong with other tools of this nature, like say the Plasma settings or perhaps Mageia Control Center, MATE’s solution to the problem is this simple and elegant element in the desktop environment. Warming up. 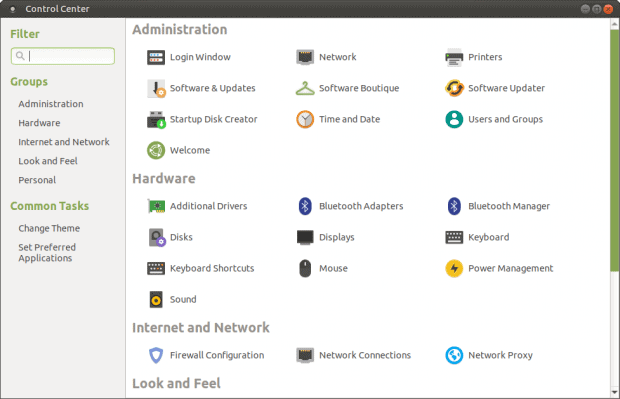 MATE comes with a very high level of granularity – you can play and tweak every little thing. When it comes to panel applets, there’s a whole load of them, a colorful set, and they allow you to enhance your desktop experience.

There are a lot of available items. For instance, the copy dialog is a seemingly innocent but powerful one, with the ability to pause and revert actions. Then, you can add a system monitor, notes, timer, Trash, weather, monitors for your disk, CPU and memory activity, and a lot more. 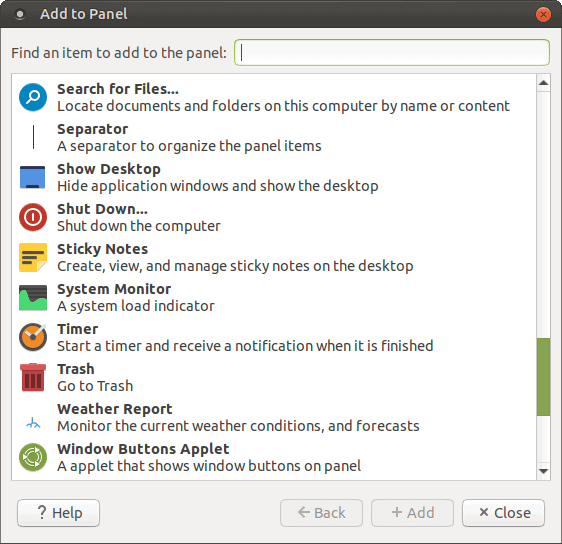 MATE’s lock screen is fairly simple and straightforward – but it also comes with an option to leave a message. Which means if someone comes by your computer, and you don’t mind other people’s greasy fingers touching your keyboard, they can let you know they were there. I can only imagine the prosaic quality of such messages in an office-like environment. 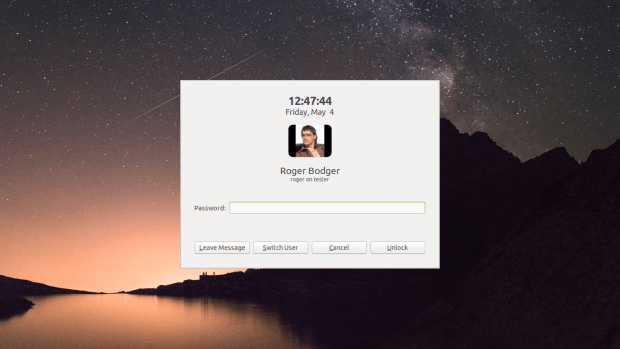 One of the most underdeveloped parts of every Linux desktop is the screenshot facility. In Plasma, Spectacle is clunky and adds unnecessary shadows. Gnome’s tool is simple, but it closes every time you complete an action. Xfce’s one also closes once you’re done, plus it mandates an extra click, as it has sharing options in addition to local save. And there’s still more variety around.

Ubuntu MATE comes with the old, proven Gnome 2 tool – with a nice addition. There’s a new [sic] New button, which allows you to take fresh screenshots without having to close the program. Moreover, if you take a screenshot and you don’t like it (the timer was too short, or you didn’t position the elements as you like), you can now quickly remedy this without starting the utility again and again. Sometimes, little things make so much difference.

Plasma has always been the king (or queen) of power management, and this is still true in 2018. Other desktops do not offer that much freedom or customization when it comes to power and battery settings. But recently, Xfce and MATE have been making progress, the latter in particular. The power manager in MATE is both more flexible and more powerful than before, and also more aggressive. It will actually modulate the screen brightness as soon as you plug the charger in and out. This is more like Microsoft Windows, more like Plasma, and more like what most people expect from their laptops. 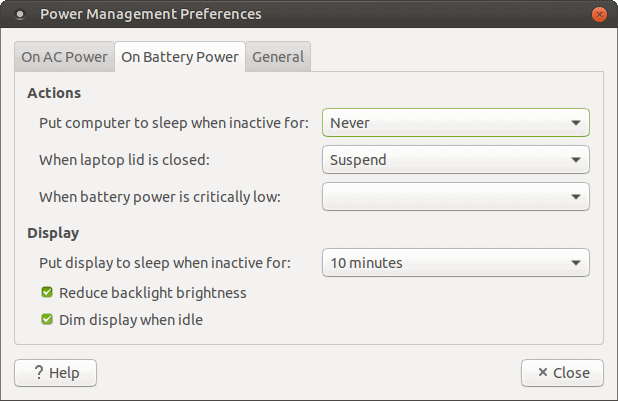 You touch my MATE, you touch my mouse control. Non-Plasma desktops had often had a very rudimentary Touchpad tool. It was effective, but it was quite basic. MATE now offers a fairly mature tool, which allows you to fine-tune the tapping, multi-finger scrolling and mouse emulation actions. If you’re a laptop user, you know how critical (or annoying) Touchpad settings can be, so having the right tool to handle is vital. Ubuntu MATE 18.04 nails it. 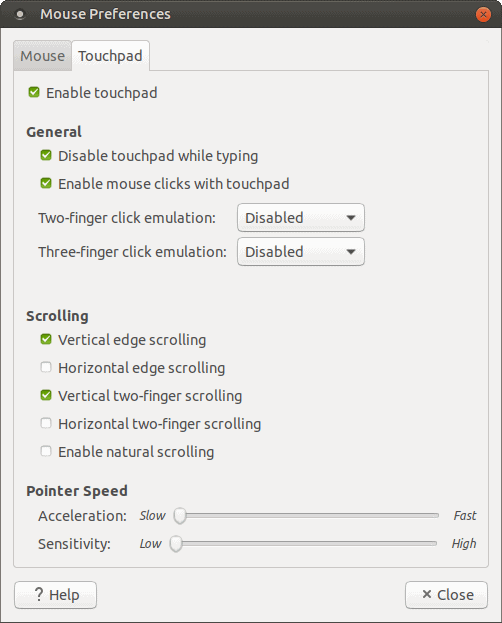 Software Boutique is the new GUI package manager. It’s been around Ubuntu MATE since 17.10, but it’s also here, to serve your LTS needs. Without using too many superlatives, this program is currently the most complete and practical package manager frontend in the Linux market, hands down – if we exclude the slowly dying (old) USC.

Boutique’s got everything. It looks pretty, and it’s easy to use. You can browse for applications by category and use a powerful filter mechanism to narrow down your searches. It supports bulk installations, you can toggle proprietary software on/off, and by default, it will handle not just the usual suspects from the standard repos, but you also get the stuff from the Partner channel (like Steam) as well as Skype and Chrome, which have recently been excluded from most (but not all) non-snap Linux repos.

The program also comes with notification, news, you can edit your software sources and repos, repair a broken package manager index, and still more. The displayed application information is clear, precise, and you also get screenshots. Very neat. A complete article to follow. 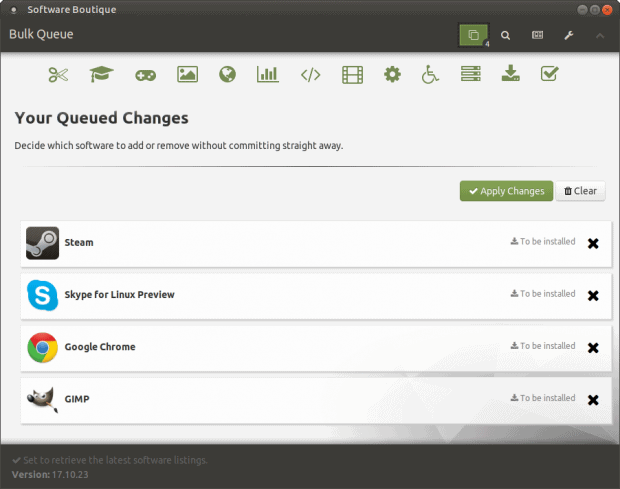 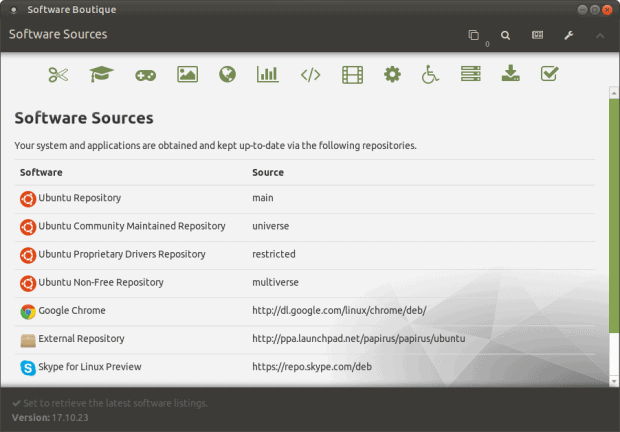 This is a really big one. While MATE has always been a pleasure to tweak and customize – more so than any other desktop environment, allowing you (just like Gnome 2) to cobble different pieces from completely different themes with joy and precision, the new version 1.20 takes this to another level. 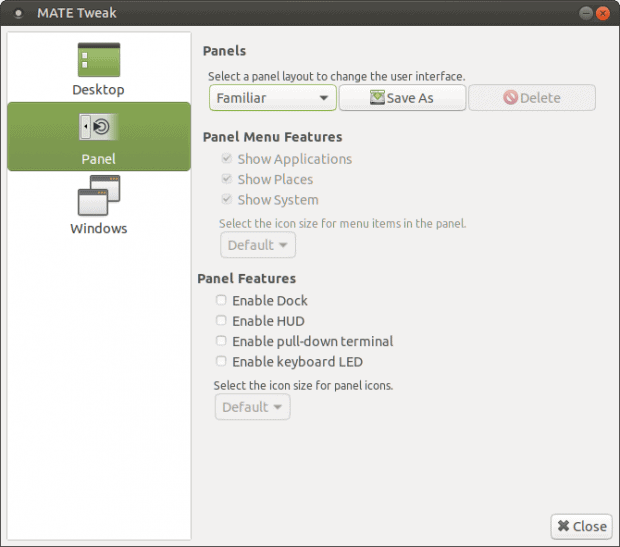 MATE Tweak is included with the desktop, so you don’t need to install anything. Furthermore, it gives you full control over your desktop behavior (and icons), window behavior, and lastly, your panels. But this isn’t just a matter of making the panel look this or that way. We’re talking a complete desktop layout + experience.

There are several presets available. You can make your MATE look & behave like the old Gnome 2 (traditional), use the default look & feel (familiar), use Redmond (for a more Windows-like setup), Cupertino (for a MAC-like layout), or perhaps Mutiny, which gives you a Unity-like layout: a top panel with an embedded global menu and window controls for maximized applications, a full-screen app menu, and a vertical dock on the left side. This works quite well, and does a reasonable job of emulating Unity looks. In fact, the closest analogy is the old Unity 2D. However, this is all modern, fancy stuff, with low performance penalty and solid looks. 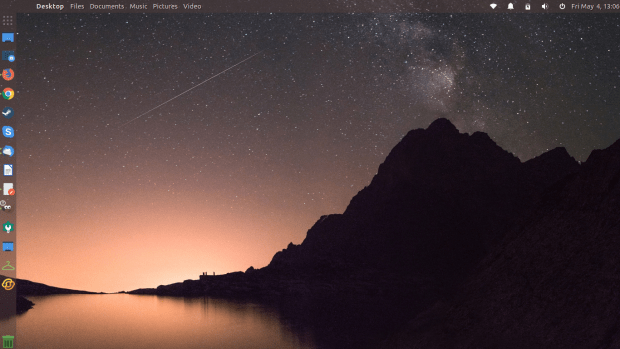 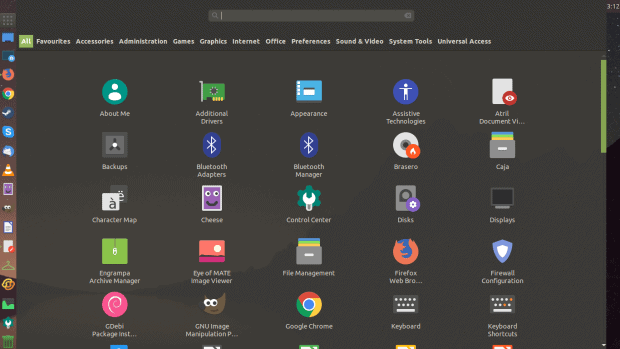 I mentioned the global menu briefly earlier. Some of the presets come with a global menu, but you can add it to the panel (any which, in fact) if you want. The applet is available in the long list of panel items, and it’s called Global Application Menu (AppMenu). It behaves in a fashion similar to Unity – once you enable it, application window menus will be “moved” from individual windows onto the (default) top panel, saving vertical space. The menu will change based on the currently selected application. There are a lot of nice options available, and you do get a streamlined workflow experience. 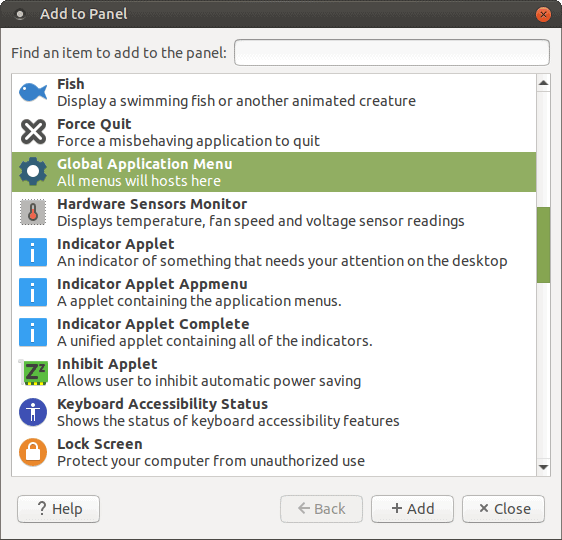 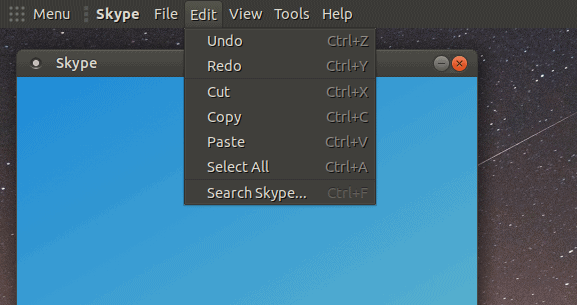 But the party does not end there. MATE Tweak comes with several additional options, all nicely integrated. You can toggle a dock (Plank), which lets you host and pin your application shortcuts. The dock will be enabled in some of the panel layout preset (with a slightly different implementation when using Mutiny, hence a separate reference), but you can also activate it manually. 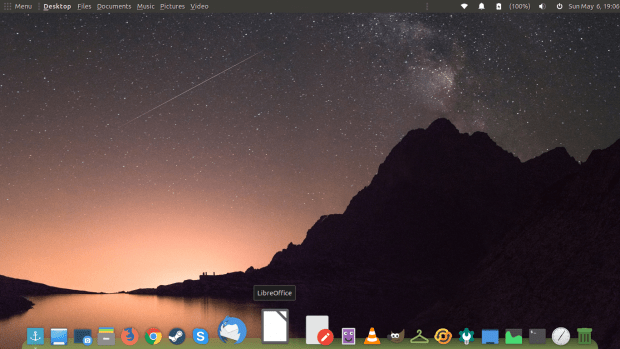 You also have the option to use a drop-down terminal. The default key to activate this is F12 – Tilde would make more sense for all drop-down console users worldwide. 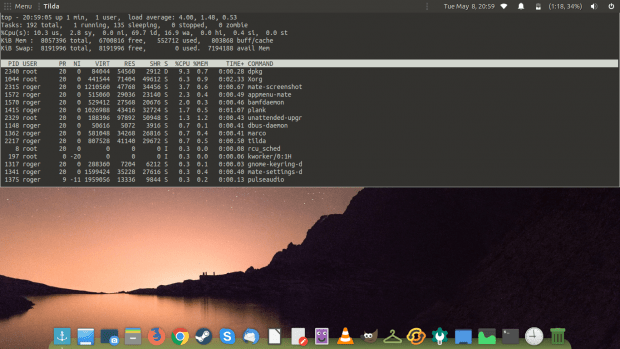 Again, this is a very Unity-like feature. For me, the HUD didn’t always work reliably – and during my Ubuntu Bionic testing, the HUD also crashed once or twice. But the actual functionality is nice. The default hot key is left Alt (press once fast while inside an application that has a menu – won’t necessarily show in the desktop itself), and then you can search through the app settings. Smart, elegant, practical. And you get it in MATE as well. 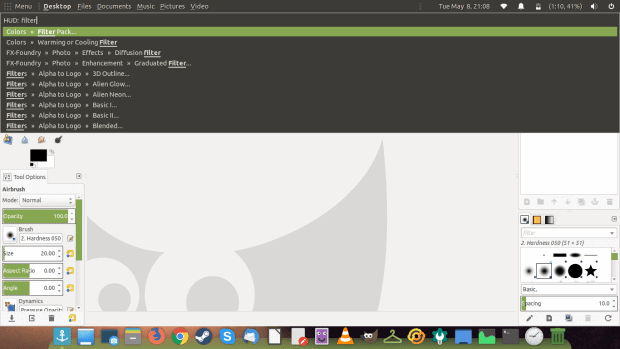 Very slick, very convenient, and it allows to “skin” your Ubuntu MATE any which way you like. This level of visual transformation is unique to MATE, and no other desktop has achieved a similar ability of flawless UI change. Others do offer varying degrees of artistic freedom, but the Gnome 2 family remains unbeaten, a full decade plus and counting.

We will talk some more about MATE customization in the future.

Ubuntu MATE 18.04 Bionic Beaver will hopefully work around its bugs and problems and present a robust, unified, slick desktop to its users. Regardless, there’s no denying the wealth of innovation and fun that’s gone into this product. For a few years, I thought MATE was sort of simmering quietly, and then, bam, it comes back like a horde of Rohan warriors riding to Gondor. Or something.

If you’re looking for an Ubuntu-like experience, Ubuntu MATE comes as close to the original as possible, and it also gives you phenomenal, unprecedented level of flexibility to customize and change your desktop however you feel like. The understated power of Gnome 2. Of course, it’s not all about Unity. On its own, as a classic desktop, Ubuntu MATE comes loaded with interesting features and options that allow you to use the system however you fancy – a classic look or a modern MAC-like look, dock, panels, global menu, themes, you name it. Shake and bake. Time to explore then. Just beware the bugs.

12 thoughts on “The Nifty Dozen: 12 cool features in Ubuntu MATE”