KDE’s Plasma has been my chief desktop for over a decade. My work-flow depends on Activities, and I appreciate how much I can customize in Plasma and how Plasma 5 has improved former weaknesses in interface design. While I frequently use other desktop environments to keep in touch, every one of them feels feels clumsy next to KDE.

Yet for all my partisanship, there are at least 8 improvements I would like to see:

The Graphics Tablet GUI
Recent kernels have built-in support for dozens of Wacom drawing tablets. If you select System Settings | Input Devices | Touchpad, a support tablet tests as functional — but at the same time that the window insists that the tablet is not recognized and the various options remain grayed out.

A tablet can still be configured using the command xsetwacom, but only for the current X server. In an irritating flashback to two decades ago, if you want to use the same configuration again, you need to run a script before using the tablet.

Presumably, the GUI was functional at one point, and provided Linux users the same functionality as on other operating systems. Yet if it’s not going to stay updated (and I realize it’s probably a low priority), why include it at all? 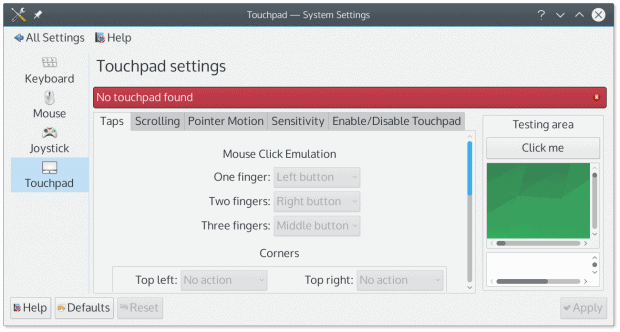 Hot Spot Options
System Settings | Desktop Behavior | Screen Edges offers eight hot spots, each of which can be set with one of fourteen options. You might suppose that this would be enough customization for everyone, but I keep wanting more options. In particular, I would appreciate settings for basic text editing functions, such as Copy, Cut, and Paste. Granted, each of these functions is available with a two key shortcut (or three at the command line), but I use them hundreds of times a day, so being able to use each of them from a single-click hot spot would be a major ergonomic advantage.

For that matter, is there any particular reason why the hot spots couldn’t be set to start any command or script?

This redundancy matters because, with Virtual Desktops available and well-known, many users see no reason to use Activities. One of Plasma’s greatest strengths is ignored in order to maintain a minimal distinction.

It seems to me that have a separate Desktop folder for each Activity would be much easier. However, with Activities being de-emphasized, I don’t expect that change any time soon.

Krunner
Krunner is a floating window with a single line command line. It can enter a command, kill applications, convert between different measurements and currencies, and many other things. In Plasma 4, it was an efficient tool, returning only the information I needed, and showing running services in a separate window. It was quick and powerful, and I used it frequently.

In Plasma 5, however, Krunner’s interface was redesigned in the name of simplicity and at the expense of returning unncessary results. Now, when I enter –for example — $400, instead of giving me only conversions in major currencies and that of my desktop locale, it also returns a long list of irrelevant information, including a calculator function, and random audio, image, and text files, and folders — none of which even have $400 in their names or contents.

I still use Krunner, but far less than I used to. Although in many cases, the result I want is near the top of the results, it isn’t always, and the irrelevant results are a constant irritation. What was once a useful tool is now significantly diminished.

KWallet
In theory, I am all for a password manager. Just don’t ask me to use Kwallet again.

The trouble with KWallet is that it is unreliable. Set when it should close — or if it will close — and KWallet ignores the setting, closing seemingly at random. Set a default wallet for passwords, and it loses track of it. At times, it loses track of applications whose passwords it is supposedly storing, yet continues to pop up demanding the passwords it apparently doesn’t have.

Even worse, its package dependencies mean that KWallet is impossible to remove without taking essential portions of Plasma with it. The best I can do is disable it and use non-Kde applications that it does not want to automatically mother. In other words, far from being the aid it is supposed to be, KWallet is an active nuisance, whether I use it or not.

KMail
I would prefer to use KMail, I really would. It’s integrated into other personal information such as calendars and To Do lists, and has all the features I am likely to want, including easy email encryption and detailed filters for directing emails into separate folders.

The trouble is, KMail is shaky on the basics. In my experience, KMail will use a filter correctly one day, and then ignore it the next day, even when the sender is the same. Even more annoyingly, it appears unable to correctly count the number of messages in a folder.

For months, I endured such problems, hoping that another upgrade would fix them. Instead, after a few months, KMail stopped working altogether. Other personal information apps continued to work, but KMail stubbornly refused to respond to the removal of old configuration files, reinstallations, and everything else I tried. Nor am I the only one who has had such problems. In the end, I switched over to Claws Mail, and the simple act of receiving emails became much less annoying.

Akonadi
One of the innovations in Plasma 4 was the creation of sub-systems for different functions. Phonon, for example configures the various uses of sound, and is often more useful than pavucontrol when problems arise. Similarly, it is relatively easy for programmers to implement a new graphical interface for Plasma, such as one for mobile devices. When it works, this creation of sub-systems aids innovations and gives users tools with which to troubleshoot.

Sadly, Akonadi, the sub-system for personal information, has never been especially useful. For years, ot used to show the results of detailed tests, but gave no information abut what to do if a test failed. In recent years, this set of tests has been removed — only to be replaced by the Akonadi Console. From a non-developer-s perspective, the only thing that can be said is that the Akonadi Console is that it is useful for turning the Akonadi server off and on. It still does little to help with problems with personal information tools.

For me, the result is that I use tools for addresses, lists, and appointments that are not managed by Akonadi.

Finishing Details
If you think that I am ungratefully complaining, think again. So far as I am concerned, Plasma is the most advanced desktop available on any platform. I only have to compare it to Cinnamon, an admirable desktop in its own right with its own reputation for innovation, to see how far ahead Plasma is.

In fact, that may be the problem. Over the years, Plasma has outgrown other annoyances, such as dumping new features into an Advanced tab while developers figured where the features belonged, and produced a desktop whose advantages are so obvious that the problems are emphasized, too.

To me, it seems that the greatest challenges currently facing Plasma developers is to think through some of their innovations, and to adjust existing tools or add new ones that will allow users to take full of advantage of what the desktop has to offer. If they begin such tasks, then Plasma will start to realize its full potential.