Recently, I have installed and tested Linux Mint 17.2, and found it quite adorable. One of the major improvements the distribution brings to the proverbial Penguin table is a set of stylistic and functional changes to its settings menu, including the way you manage themes, icons, extensions, and the rest of the desktop bits and pieces. All of that, in a review, coming soon. But that’s only one side of the story.

An essential piece of the desktop environment, the extensions provide both a wider array of features beyond the default set as well as provide a way for the community to become and remain engagement with the distribution. Mods, in their various shapes and forms, have often helped products become more successful, through a myriad user contributions. Look at Firefox, look at digital games. But then, how good and useful are Cinnamon’s extensions really?

In my humble, not-so-humble view, KDE or Plasma offers the golden standard for how you achieve extended desktop behavior. All of the additional tools are managed through a single interface, and there’s a very strict way how they can be designed and added, and to what end. Then, still through the same, single interface, you can change all the different aspects of the desktop, without having to step out and prowl the Web. The moment you have to use multiple applications to achieve the result, the magic is gone. 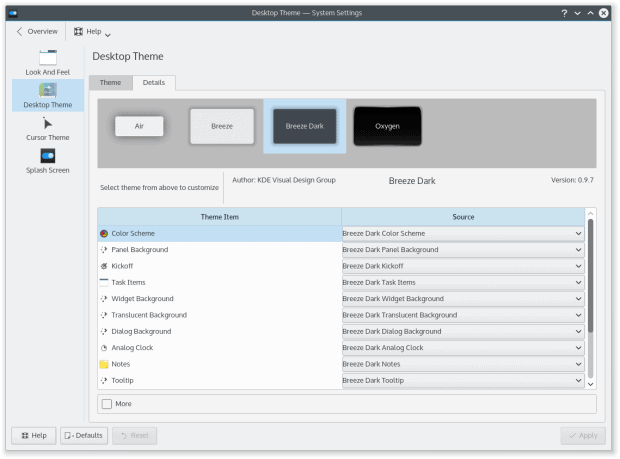 Other desktop environments have largely tried to align to this model over the years, and Cinnamon has done with good success overall. We did discuss the differences between Mint’s default desktop and KDE in the past, and the lessons the two could learn from one another. Indeed, the convergence is happening, all the time, leading to tighter, better integrated, more valuable products for the user.

To examine how Mint has been doing recently in the extensions space, I decided to explore the available listing, choose some of the more useful options and load them into my desktop. Overall, there are some 30-40 extensions. If you want to learn more about each, click on More info, and a browser page will open up. Not good. This already breaks the magic. 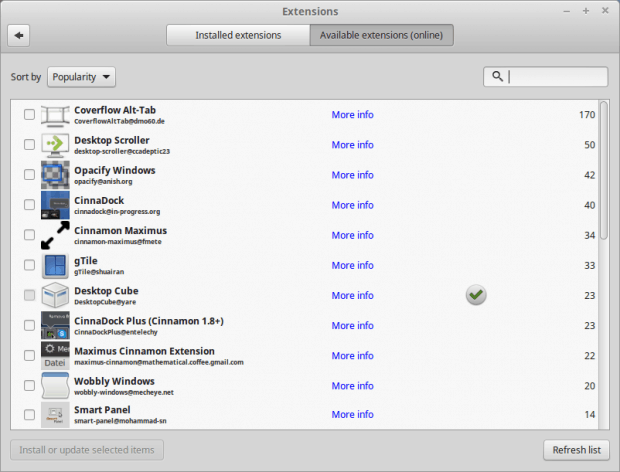 Not too many options; most are related to workspace switching, alt-tabbing, and window effects. 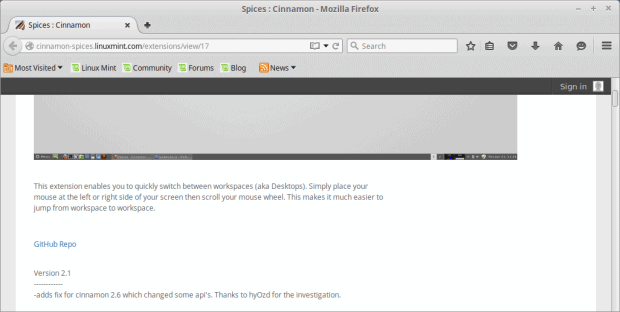 You shouldn’t need to visit the Internet to learn more about what a system component can or cannot do.

Moreover, the extensions can roughly be grouped into three buckets. One, extensions that glorify workspace switching in some way, including fancy 3D effects and cubes and such. Must be old Gnome 2 Compiz nostalgia. Two, extensions focused on windows switching effects. Three, extensions that will make windows behavior stylish and colorful.

The prevailing theme seems to be a not so curt nod toward Compiz. More worryingly, there’s no real need for this functionality, and it’s entirely cosmetic. Compare that to KDE, where most extensions, widgets, and other plugins are actually designed to inject new activities into your desktop. It could be said Cinnamon is complete enough on its own, but then, there’s really no use for extensions.

Another thing that you may not like is the number of “up” points or favorable votes for the listed extensions. With the count in low hundreds at best, and often with single-digit approval rating, plus the fact the list includes only a handful of extensions, the whole concepts gets an aura of sweet but sad afterthrought, a ghost of what user-modding could or should be versus what it actually is.

Linux Mint is a powerful distribution, and it works out of the box, making extensions largely unneeded. However, when they are presented in a somewhat lackluster manner, they undermine the success and the popularity of the distro. You may assume that only a handful of enthusiasts are dabbling in the product, writing extensions, and as a result, Mint is a niche product. This is clearly not the case, and while Mint is not a leading operating system in the world, it’s still used by a sizable crowd of several millions. None of that comes to bear when you look at the extensions. The offering should be vibrant, rich, proud, or at the very least, so well tailored, it hides away the gory and less glamorous details.

But it gets hotter

I mean spicier. I selected five extensions that looked like the best candidates for my use, and installed them. Then, if you change to the Installed extensions tabs, you can load them into your session. There’s a difference between having the packages installed and actually using them. 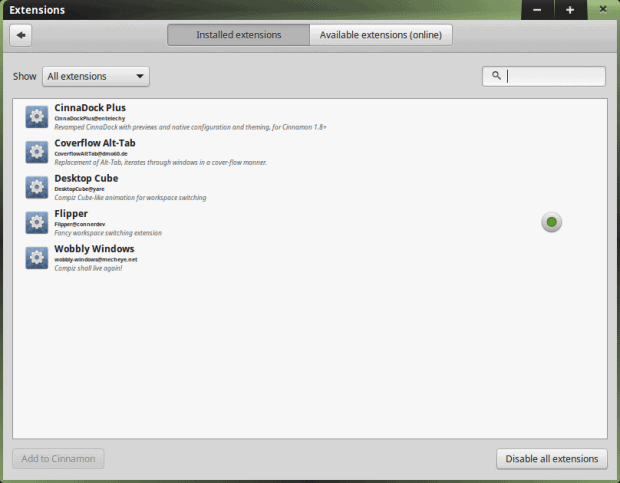 Here, I ran into a serious problem. Out of five extensions, only one, Flipper, was compatible with the current version of Cinnamon. All the rest, Coverflow, Desktop Cube, Wobbly Windows, and CinnaDock Plus threatened to eat my hamster alive.

All your incompatibility are belong to us.

My big question is, if these extensions are not compatible, why list them? If they can potentially break the system, why include in the first place? Then, why have they not been updated. It’s been several solid weeks since Rafaela was released, so why aren’t they brand new polished and compatible? If their developers have abandoned active work, once again, the extensions ought to be removed, or at the very least, mark as potentially unsafe. No different than the 1-5 package management rating used by Mint.

At this point, I focused on making other things pretty in Cinnamon. However, my journey of how to get icons and themes and windows decorations belongs in another story. And much like this one, it’s full of Internet, searching random sides and dodgy PPA, trial and error, much guessing, some luck, and tons of patience. But more about that later.

Linux Mint works well. Cinnamon is an excellent desktop environment. But once you step outside the closely controlled sphere of Cinnamon proper, you hit a world of problems and inconsistencies. The extra bits are provided in a very shoddy way, which makes the desktop look unjustifiably bad. Extensions, which are supposed to make the desktop work better, do not work at all.

The rating system looks poor, the engagement feels thin, and repertoire is quite meager, and worst of all, even if you do feel like using extensions, you won’t be able to, because most of them do not comfort to the latest version of the desktop environment.

As harsh as this conclusion may be, it mostly highlights the need for an extremely tight QA in every single aspect of the desktop development, and that’s the kind of stuff that separates professionals from amateurs. It also highlights the fact Cinnamon is a pretty neat and highly functional desktop environment, and it does not really need any extensions. Fair enough, but then, they should either be made super useful, or removed completely. In their current state, they don’t do Cinnamon any justice.

4 thoughts on “Cinnamon: Not all Sugar and Spice”