GNOME and Unity may have banished applets from the panel, but Linux Mint has chosen the opposite approach for Cinnamon. Instead of removing clutter from the panel, Cinnamon encourages it, offering over 165 small utilities. And as if that were not enough, for the last few releases, it has also offered 18 desklets — applets for the desktop. The result is endless opportunities for customization that are rivalled only by KDE Plasma.

The difference between applets and desklets? Location, location, location (mainly). Several utilities are available for both areas. You can select either from Preferences in the main menu, although for both you may want to see what is available online instead of confining yourself to those installed on your hard drive ready for use. 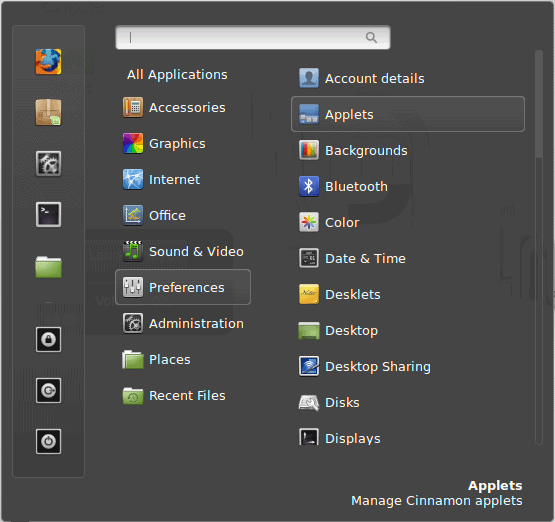 As usually happens in environments that allow applets, many of Cinnamon’s applets are standard widgets. In Cinnamon’s case, even more are variations of widgets. For example, the available applets include Better Settings and Better Places, as well as a Multi-Line Taskbar. There are also about ten variations on menus, ranging from the Classic Menu, GNOME 7 Menu, or Win7 Menu Emulator to the race towards minimalism implied by the names of the Stark, Simpler, and Simplest Menus. 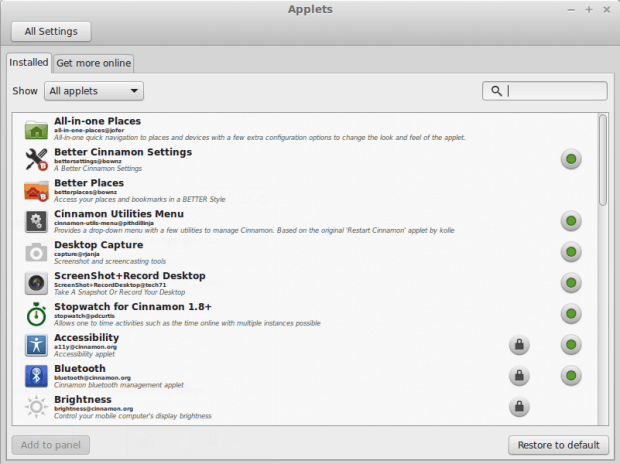 Applets and desklets offer over 180 different utilities. Notice the Get More Online button.

Other applets, however, are more inventive. The Graphics Center and Office Center offer a taste of task-oriented computing. The Virtual Keyboard is available for users with limited vision, while bloggers might benefit from Shortenize URL. If Cinnamon’s applets don’t have something for everyone, you get the impression that they soon might have, considering applets such as sports-update, Virtual Machine Launcher, and Hamster Time Tracker.

Desklets are fewer in number than applets no doubt because they are newer and tend to emphasize the practical. However, some utilities such as Cinnamon Developer’s Tools are probably more useful at desklet’s increased visibility and sizes; applets, by contrast, are easier to overlook because their size is confined by the height of the panel.

Cinnamon’s applets and desklets could be implemented more smoothly. Their dialog windows are buried too deeply in the menus, and keeping most of them online means that the ones you want must be downloaded first, then installed. The drag and drop installation that modern users expect simply isn’t there, and the current arrangement feels cumbersome.