For most people, literacy means mastery of upper and lower case letters. However, there are a number of symbols used in everyday writing in English that few people formally master. Of these symbols, one of the most widely used is the bullet. Unlike most word processors, LibreOffice gives you full control over bullets, including offering a surprise or two.

However, before looking at the features for bullets, it helps to review the conventions for using bullets. To start with, bullets are used when you have a list in which the order is unimportant. For example, if you have several pieces of random advice, you should present them as bullets. By contrast, if you have a computer procedure in which certain steps must be done before others, you should present them as a numbered list. If you do not follow these conventions, you could be giving the wrong impression to readers — for instance,  if one item is to turn on a safety control, it clearly needs to come before other items, and you should use a numbered list.

Although you can enter bullets manually using the tool bar, for the most complete control, create them by using List styles in LibreOffice. Each list style has a Bullets tab that includes useful bullets, especially if you have sub-bullets for which you want different types of bullets. However, avoid the graphics on the Image tab unless you want a retro-1990s look. The only reason to use the Image style is for backwards compatibility with very old documents. 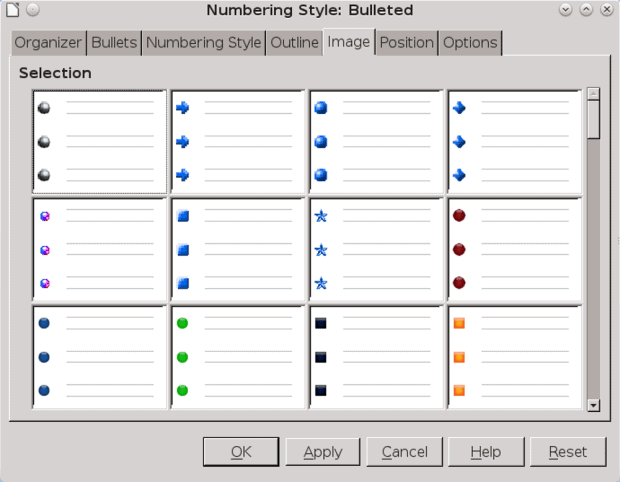 Avoid bullets on the Image tab unless you’re still lost in the Nineties.

If you want to customize a bullet list, the tabs that matter are Position and Options. Other tabs in a List style are for numbered lists and outline lists. On both the Position and Options tab, you can set features one level or a time, or all at once. Most of the time, setting only Level 1 is all you are likely to need.

Use the Position tab to customize the spacing before bullets, and the distance between a bullet and a text item. The fields that matter for bullets are: 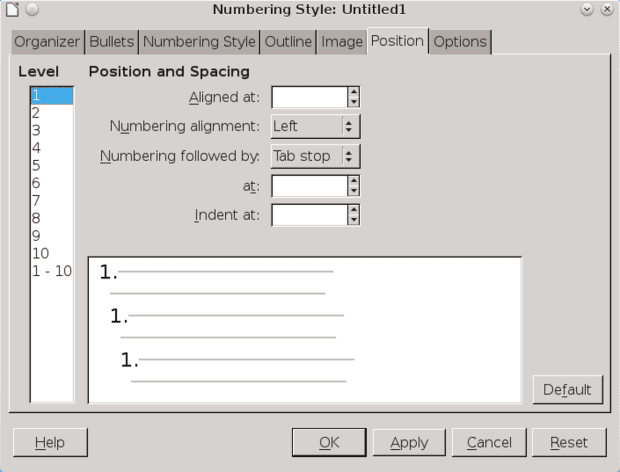 The Position tab is all about spacing.

Selecting Graphics or Linked Graphics is useful when you want unusual bullets. Either can be useful to create callouts in a text. For example, you could create a List style that uses the graphic of a stop sign as a bullet to emphasis a caution or warning.

You can select the graphic, its size, and its alignment in relation to the baseline of the item’s text. Since most bullets are presented at a small size, a graphic to use for bullets should be simple and bold so that it is readable. Since the line spacing is geared to the height of the text, you may needed to open the Paragraph style for the items in the list, and change the line spacing. Probably, too, you want to change the spacing above and below the Paragraph style to avoid the graphic looking crowded. 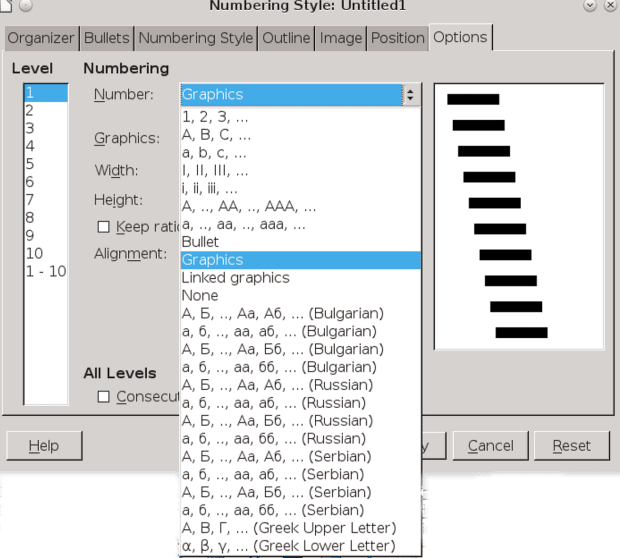 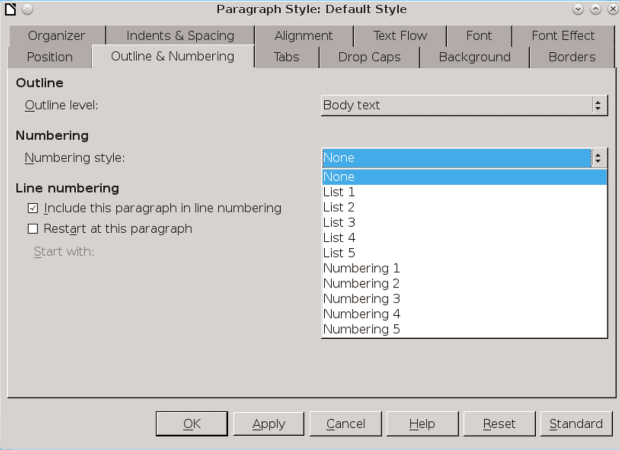 Using bullet lists is a modern part of literacy, especially on the web, where the tendency of lists to take up more space is irrelevant. If you are unclear how to use bullet lists, take the time to learn — and, when you do, LibreOffice and its List styles will be ready for whatever you want to do with them.